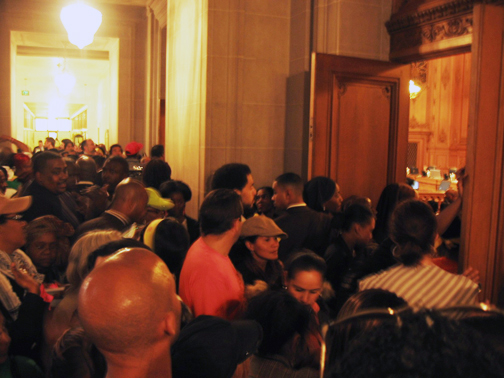 On Thursday, Sept. 3, at their weekly town hall meeting, the leaders of SLAM (Stop Lennar Action Movement) reminded the audience of the kind of power they have in the battle to save Bayview Hunters Point. Minister Christopher Muhammad, Archbishop Franzo King and Francisco Da Costa shared the latest news of SLAM’s progress and urged the audience to understand that by staying focused and vigilant and not letting anything turn them around, they will win the war.

Archbishop Franzo King opened the meeting with a stirring prayer and followed with a moving talk about the fact that SLAM is a spiritual movement. Because of its strong spiritual foundation, God is not only an ally of the people, but God is the force behind everything they do. So even though those greedy politicians and unscrupulous developers who are working against the people of Bayview may be powerful, their power is of little use against the power of God.

Minister Christopher Muhammad delivered an inspiring speech on the power of vigilance and perseverance. He cautioned those in attendance to remain on the alert and keep up the fight. He urged them to understand that the struggle is long and progress is not easy to see. The long duration of many years and slow pace of the struggle against the power structure could dull their enthusiasm and lull them back into a state of unconsciousness and inaction. He explained that this is a condition called “Hunters Point Weariness.”

He warned that the politicians, developers and the Pacific Heights Mafia are counting on that weariness of the people to stall the movement. They are intent on continuing their evil work against the community – poisoning the environment and exploiting the poor and disadvantaged of Bayview Hunters Point

He recounted his experiences on a recent trip to New Orleans where, he says, the tourist areas of the city show almost no sign of the ravages of Hurricane Katrina, but a trip to the Lower 9th Ward told a different story. He said it was Katrina Ground Zero and it still bears the scars. 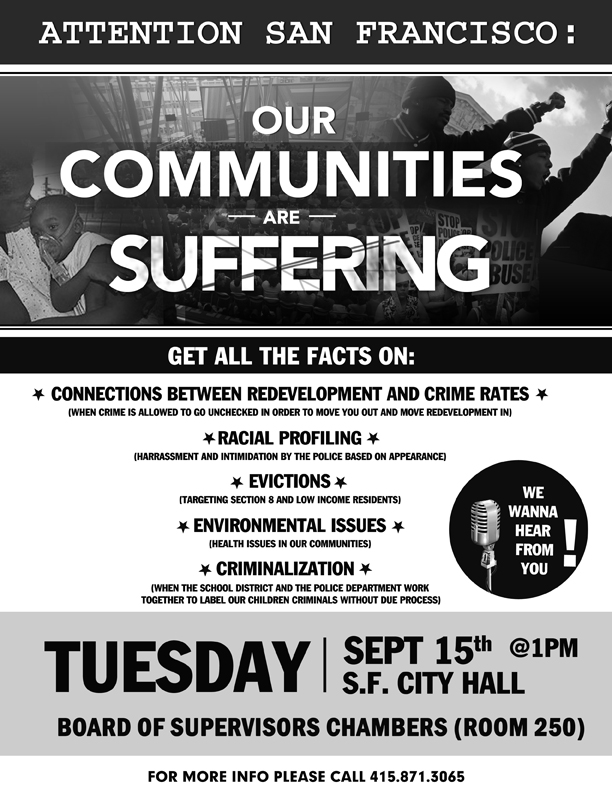 Minister Christopher explained that four years after the devastation of Hurricane Katrina, the Lower 9th Ward looks pretty much the same as it did only days after Katrina. It is still desolate and looks like a war zone. It is still missing the thousands of energetic optimistic people who lived there before the hurricane. The only new homes that have been built to replace the many hundreds of homes destroyed by the storm are those few that have been built by Brad Pitt’s foundation.

He emphasized the horror of the fact that four years after all the photo ops and promises and activism, practically nothing has happened! The only visible progress is because of the efforts of a socially conscious movie star who dares to put his money where his mouth is.

He pointed out that the governments of New Orleans and Louisiana have thrown up their hands and decided to just “write off” the Lower 9th Ward. They seem to be hoping that if they turn their backs on the 9th Ward, it will just go away! They seem to be hoping that eventually the thousands of African Americans who are now scattered across the United States – those who used to call the 9th Ward home – will settle into their temporary lives and forget about coming back.

He leveled the accusation that the people in power are now sitting back and doing nothing. They don’t fear any outcry because those who would cry out are gone. The politicians and activists and do-gooders who used to shout out on behalf of the 9th Ward and its people have all moved on to other things. They’ve taken up some new cause or they have been overwhelmed by “Katrina Weariness.” The Bush administration and the Republicans seem to have stalled long enough to wear down those people who were not prepared for the long hard battle of doing what is right.

Then to the sounds of applause and shouts of “Amen” and “Teach, Minister,” he strongly assured the enthusiastic crowd that the evil powers aligned against them are afraid. Those who are poisoning our women, children and elders must answer for their actions. Those who are seeking to steal our community are doomed to fail because God is on our side.

He reported that the movement is spreading all over the Bay Area – to Oakland, East Palo Alto, Antioch, Pittsburg, Vallejo and even Sacramento. He celebrated the fact that Lennar is going broke and getting desperate. He speculated that Mayor Gavin Newsom quakes in his boots every time he hears that SLAM is coming.

Now the exploiters are terrified by the news that SLAM is working to build support in Sacramento and intends to flood the chambers of the Board of Supervisors on Sept. 15.

Archbishop Franzo King shared the fact that Sen. Mark Leno is feeling the pressure. In a meeting that Archbishop King and others from Bayview attended with him, Sen. Leno got so upset with them that he started shouting at them in anger and frustration. He was disturbed by their determination and persistence to expose him and his anti-environmental, anti-Bayview plan to turn the California state park at Candlestick Point over to Lennar for condominium building.

Minister Christopher reminded his audience that SLAM is a spiritual movement. SLAM is standing up for right against greedy and selfish interests that are tools of the Devil. He shouted in the midst of their cheers that those with evil in their hearts cannot win against God’s movement. No matter how strong or how rich or how powerful they may appear to be, God is bigger than all of them and they will lose!