by the Chicano Mexicano Prison Project 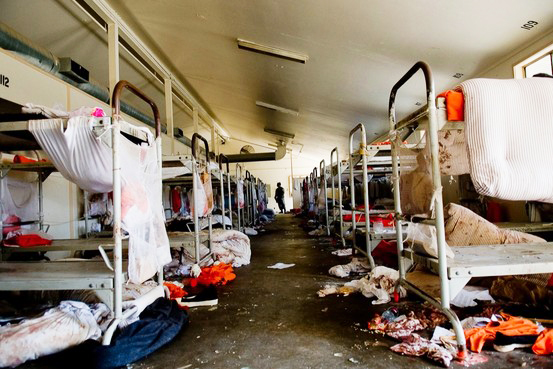 Once again, major violence between Raza and African prisoners has erupted within the United States Concentration Camp (Prison) System, this time at Chino California State Prison. Beginning at 8:20 on Saturday evening, Aug. 8, African and Raza (Latino) prisoners, in the most brutal fashion, slashing, cutting, hitting each other with anything that could get their hands on, battled for more than 11 hours. Over 200 were hurt, several critically, with severe head injuries or stab wounds. Blood was spilled everywhere. Many of those involved will be scarred and maimed for life, both physically and mentally.

But this latest violence is nothing new. Nor was it the worst. For years, not only in California, but also throughout the United States, Raza and African prisoners have been at each other’s throats. Those of us who should know better – the social activists and so-called educated – should be clear about the root causes of this horrific violence that continues, unabated, decade after decade, and how it only serves to keep both nations oppressed and colonized; and most importantly, what we must do about it.

While some refuse to see or accept the truth, the reality is that the prison wars between Raza and Africans are nothing but the old strategy of divide and conquer, which the European (white) colonialist-capitalist system has successfully used against our people for more than 500 years. The “hand of white supremacy” behind the recent hostilities should be obvious to everyone.

It is no coincidence that so few white prisoners were involved or hurt. Or that not “one guard” suffered even a scratch. That fact is, that the racist prison system, which is responsible for the torturous and inhumane treatment of Raza and African prisoners, was not the object of the prisoners’ anger. As racist as some of the white prisoners are – many belonging to groups such as the Aryan Brotherhood, Hells Angels, Skin Heads and Minutemen – they also were not the target of the riot. In fact, our carnales and brothers – and carnalas and sisters – in the prisons are so confused and disoriented by the divide and conquer tactics of the capitalists, which white power comes from, that they don’t even see the prison system as their main enemy.

The constant blaming of Mexicans/Latinos for all the problems facing the United States, branding us “illegal aliens,” and the fact that even as the “riot” at Chino was taking place, prison officials and politicians were already blaming “Latinos” as the cause of the violence, all form part of the trickery called “divide and conquer.”

What we, Raza and Africans, and all oppressed people, including poor whites, must understand is that the “divide and conquer” strategy is the foundation upon which colonialism-capitalism rests. And if we are serious about ending the vicious violence among colonized and oppressed (poor and working class) people, colonialism-capitalism must be destroyed.

It is in the question of the “destruction of capitalism” in which we find so many otherwise “educated” people acting dumb and stupid. It is here where we find some people to be “utterly lost” as to what causes violence and what is the solution – as the answer is found with them deciding on whether they want to keep their nice cars, cushy jobs, vacations and nice homes, which capitalism provides, or do they destroy the foundations of capitalism – racism, colonialism, oppression and destruction of our planet – and thus risk losing the materialistic lifestyle that they enjoy so much.

All of us living inside and outside the U.S. Concentration Camp (Prison) System must realize that the violence between colonized people affects all of us, as prison wars spill out into the streets, communities and schools. “Race” violence occurs every day within the United States. Most of the victims are innocent, and most are young people. Therefore, if we care about our youth and about peace and justice, then we have to get involved in the struggle to end prison violence.

The CMPP calls on all of us to unite against colonialism-capitalism and all its manifestations. We must struggle for a revolutionary change in society. If the CMPP has learned anything during the last 20 years, is that prisoners respect revolution. Only this type of struggle can unite Africans and Mexicans-Raza and put an end to the antagonistic confrontations between our peoples.

The Chicano Mexicano Prison Project (CMPP) was established in 1993 by Unión del Barrio. For close to 20 years the CMPP has been the most active and consistent Mexican-Raza organization doing work around the question of prisons and their role in the oppression of poor and working class communities. On June 28, 2009, the CMPP held its annual conference in East Los Angeles, where one of the issues discussed was the ongoing war between Mexican-Raza and African prisoners. For more information, visit http://uniondelbarrio.org/laverdad/.