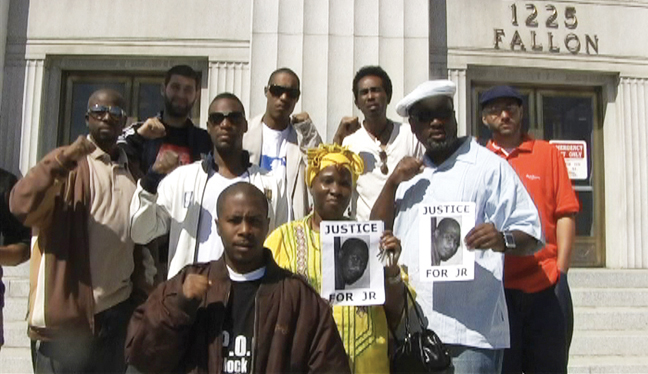 More than nine months – and almost a dozen court dates – after the arrest of journalist M.O.I. JR aka JR Valrey as he covered protests over the cold-blooded murder of Oscar Grant, the Oakland police and Alameda County District Attorney’s Office still haven’t faced up to the fact that they have no case.

JR – Minister of Information for the Prisoners of Conscience Committee (POCC), host of Block Report Radio, a producer at KPFA and associate editor of the Bay View – was thrown in jail on the night of Jan. 7, 2009, during the street uprising over the authorities’ inaction against Grant’s killer, then-BART Police Officer Johannes Mehserle. Ever since, the DA has been dragging out the case, forcing the defendant, his lawyers and his supporters to come back to court over and over again, mostly just to make minor procedural arrangements.

At the latest hearing, on Sept. 21, Judge Maurice Jacobson (a former prosecutor and before that a corrections officer, until he was appointed to the bench by Arnold Schwarzenegger) set yet another date: Friday, Oct. 30, at 9 a.m. at the Alameda County Superior Court, 1225 Fallon St., Department 11, in Oakland.

“We’re still hoping the DA will drop the charges before then, but if they insist on going to trial, we’re ready for them,” said JR’s attorney, Marlon Monroe, after the hearing. Many of the supporters who attended the hearing had signs with the defendant’s picture and the words “FREE JR” in large letters pinned to their chests.

JR is facing a charge of felony arson, which carries a term of up to three years in state prison. At the “preliminary” hearing in the case, on Aug. 20, the one witness, Oakland Police Officer Robert Ruiz, claimed that he had observed JR holding a burning piece of paper over a trash can near 14th and Clay Streets in downtown Oakland, then saw flames in the trash can. But when JR was arrested and thrown to the street a moment later, he had no matches, lighter or anything else that could have started a fire – just his reporter’s notebook and camera. And under close questioning from Attorney Monroe, Ruiz had to admit that he couldn’t remember many details from the scene of the alleged crime, including the shape, color, or material of the trash can he said he had seen burning and examined later for damage.

From the beginning, JR has insisted that the charges are bogus and politically motivated. “It’s just part of the campaign to lock the Black community up, specifically the political voices in our community,” he said. “The real reason they’re going after me is that I have written extensively about police terrorism in the Bay Area, such as the cases of Laronte Studesville and Gary King” (two young Black men shot by the Oakland police in 2007).

All told, the police arrested about 160 people during the protests that rocked Oakland after the murder of Oscar Grant, but nearly all have had their charges dropped. At the Sept. 21 hearing, Judge Jacobson told one of the other remaining defendants, Andrew Lewis of Oakland, that the DA was prepared to drop drug possession charges against him if he agrees to pay $3,000 in restitution for damages allegedly caused to an Oakland restaurant during the Jan. 7 protest.

Even the judges who have presided over the proceedings in the case have expressed doubts about the case against JR. After a Sept. 3 hearing, Judge Jacobson said, “I have some concerns about the charge – there may be something there or there may not.” And after the preliminary hearing in August, Judge Philip V. Sarkisian tried to arrange a plea bargain. Under the deal, according to JR, he would have been required to plead guilty to a misdemeanor, instead the felony charge, but he still would have faced five years of felony probation and warrantless searches of his person, car, home and places of employment at any time. In addition, he would have had to issue an apology to the city and pay restitution.

Apology and restitution for what? “I don’t know what they were talking about,” he said.

When JR turned that deal down, Sarkisian declared in open court that his decision “bordered on recklessness” – apparently it’s reckless, in his view, to try to prove you’re not guilty of anything when the cops say you are!

Meanwhile, JR is still waiting to recover the camera the police confiscated the night they arrested him. Months ago the court ordered it returned to him, but every time he tries to pick it up, he said, the police either claim the officer who can release it isn’t available or raise some new procedural hurdle.

“I’m certainly getting an education about how the legal process works – or doesn’t work,” he said.

Henry Norr, who was fired by the San Francisco Chronicle in 2003, is a member of the KPFA Local Station Board. The Bay View strongly supports his re-election. He can be reached at henry@norr.com.