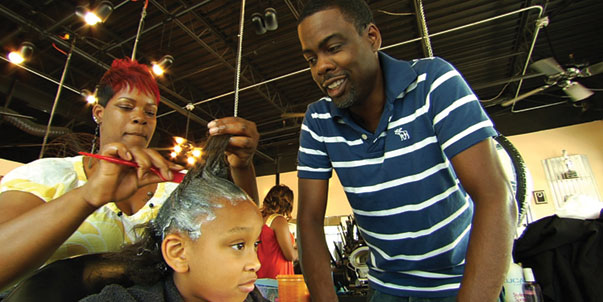 In his new film, “Good Hair,” Chris Rock approaches the subject of Black women’s hair – all at once – like a man, like a novice, like a voyeur, and like a comedian in his investigation of hair weaves and hair straightening relaxers. And the results are mixed. In his exploration, he all but ignores the existence of so many Black women who don’t choose to alter or cover the hair texture that grows naturally from their scalp.

When I asked Rock about these omissions and deletions during a recent interview in Washington, D.C., Rock joked with a good-natured assurance that those of us who are au naturale belong to a small set of the Black population that goes to concerts featuring Common or Erykah Badu, as opposed to the masses following the likes of Lil Wayne. He reasoned further that a film, for example, about people with locs doing their hair “with shampoo and beeswax” couldn’t compete with the footage, much of it a spectacle, that he and director Jeff Stilson have gathered for “Good Hair.”

I guess it depends on what world you are living in – but Rock is from Brooklyn! – and what you are trying to say. No doubt, another treatise on natural hair, such as the 1997 “Middle Passage-N-Roots” by Ada Marie Babino or the 1984 “Hair Piece: A Film for Nappyheaded People” by Ayoka Chenzira could not compare to the surreal scene in “Good Hair” of the annual Bronner Bros. International Hair and Beauty Show in Atlanta.

At the show, hair stylists compete – in fishtanks, with near-naked models and while hanging upside down – to win first prize. But the show, with its dizzying statistics on the amount of money that Black people spend on hair care, the fact that most vendors and manufacturers are Asian, and the emphasis on relaxers and weaves – also amounts to a testament to the opposite of Black power. That testament about our lack of empowerment is delivered full blast while there is little acknowledgment of the African American resistance to a European beauty standard or our embracing of our own curls, waves, naps, braids and locs.

So, even though Rock includes very briefly two women who have turned their back on chemicals – the “creamy crack” one woman calls it – and exposes the ridiculous expense of most weaves, as well as the toxicity of the sodium hydroxide found in most relaxers, including so-called “kiddie perms,” Rock glosses over the important history of our difficult and wonderful journey to reject straightened hair and embrace our natural selves.

In “Good Hair,” we are only left with ridicule and a joke. I screened this movie with a predominantly White group of critics and every time they laughed, I knew they were laughing at Black people and not with Black people. Again, I guess it depends on what world you are living in and what you are trying to say. It’s obvious that Rock is choosing to make his case with a mixture of (literal) acid and humor.

Those who think they know everything on this subject will still find Rock’s journey to India illuminating. Apparently, much of or most of the human hair used for weaves – and not just for Black people – comes from India, from a Hindu ceremony, wherein pilgrims are shaved bald in an act of humility and sacrifice. The temples, where these offerings are made, earn billions from the sale of hair, which is used for charity. The hair is sold to India’s hair industry, where it is washed, sanitized and sewn into strips that are eventually placed onto the heads of women getting a “weave.”

These weaves are the norm in Hollywood. Actress Nia Long sat next to Rock during his D.C. interview and said point blank that if she wore her hair naturally that she wouldn’t be considered for the role of a leading lady or “love interest” in movies. The charismatic Raven Symone is one of several actresses that come before the camera in “Good Hair” to detail their experiences with wearing hair from India, or wherever.

There are some obvious missing links (bald spots?) in “Good Hair.” Rock says that he began this hair journey when one of his daughters asked him why she didn’t have “good hair.” She had been asked this by a child at her school.

But even though this question originated at home, Rock’s wife, who would be the obvious person to oversee the hair maintenance of her daughters, is not included in the movie at all. By all appearances, it certainly looks as if Malaak Compton-Rock sports some combination of relaxed and/or weaved hair but we don’t get to hear any comment from her on the subject. Her absence is conspicuous in “Good Hair,” even more so than the absence of natural hairdos.

Esther Iverem is the editor and film critic for SeeingBlack.com and the author of the critically praised “We Gotta Have It: Twenty Years of Seeing Black at the Movies, 1986-2006.” Read and search hundreds of reviews on SeeingBlack.com’s Movies/TV channel and archive.

‘Death at a Funeral’: Choppin’ it up with Chris Rock and Tracy Morgan