by Mazher Ali, United for a Fair Economy 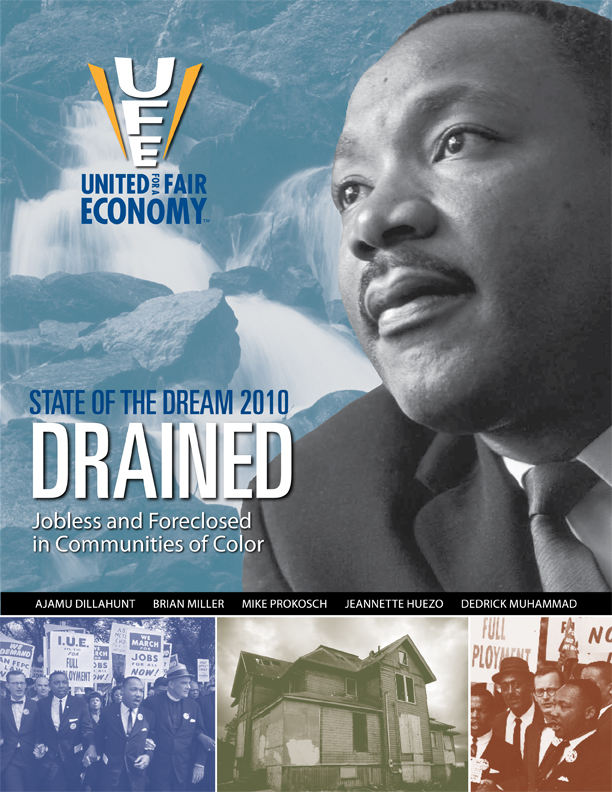 Boston (PRNewswire-USNewswire) – A new report released today finds that African Americans and Latinos are experiencing the brunt of the economic recession, from joblessness to foreclosures, and that targeted economic policies are required to address the racial economic divide in the U.S. The report, entitled “State of the Dream 2010: Drained – Jobless and Foreclosed in Communities of Color,” is the seventh annual Martin Luther King Jr. Day report from United for a Fair Economy (UFE). It is available for download at http://www.faireconomy.org/dream.

In December 2009, the Congressional Black Caucus (CBC) boycotted a financial reform vote, demanding that more be done to support Black communities in crisis. The CBC’s action was an important step, garnering $6 billion for targeted investments in the House, but “State of the Dream 2010” suggests that much more needs to be done.

“As recent unemployment statistics confirm, the broad-based economic recovery policies are not reaching those who need it most, including people of color,” said Brian Miller, executive director of UFE and a co-author of the new report. “Our report contains ample evidence to conclude that without targeted policies, such as those proposed by the CBC, we will never reduce the wide gaps of income and wealth between races.”

In December, unemployment for African-Americans and Latinos jumped to levels higher than any annual rate in 27 years.

Ajamu Dillahunt, co-author of the report and UFE board member, explains: “Families survive unemployment better or worse depending on how much of a cushion they have, and African American and Latino families entered the recession with a dangerously low median net worth. In 2007, Blacks had only a dime of assets for every white dollar.”

The “State of the Dream 2010” report contains a broad range of accessible data and analysis about the current racial disparities in unemployment, income, poverty, wealth and foreclosures. It includes policy suggestions that would target communities most deeply devastated by the current recession.

“A good model is how we prepare for a potential flu epidemic,” says Mike Prokosch, another co-author and UFE board member. “We give vaccines to the most vulnerable populations first. Economic policies should follow the same approach.”

Rep. Waters to Black voters: ‘Unleash us’ on Obama