Editorial by the NAACP Legal Defense and Educational Fund 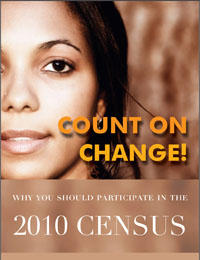 The LDF has launched “Count on Change 2010,” a strategic, collaborative, national public education campaign designed to substantially improve the inclusion of the Black Diaspora in the 2010 Census.

“The 2000 Census overlooked 1 million people of color, more than 600,000 of whom were African American,” said John Payton, director, counsel and president of LDF.

“The distribution of federal funds to state, county and municipal governments and the distribution of political power at every level of government depend on the Census. With only a short time until Census Day – April 1, 2010 – improving the accuracy of the 2010 Census is of critical importance to the Black Diaspora. We cannot afford to be excluded from the count again in 2010.”

Focusing on Black communities that face the greatest risk of omission from the Census, “Count on Change 2010” aims to increase the final Census response rate by 10 percent, resulting in an additional $633,000,000 in federal and state funding for hard-to-count Black communities.

“Count on Change 2010” is a collaboration of the nation’s leading civil rights organizations: LDF, the NAACP, the National Urban League and the National Coalition on Black Civic Participation. The program will harness the momentum of the historic 2008 presidential election cycle to improve administration of the 2010 Census in Black communities. “Count on Change 2010” includes user-friendly print materials and a dynamic website and explanatory video, available at www.countonchange2010.org.

As the January 4 CNN.com article, “Census 2010 Can Count on Controversy,” states, “Counting more than 300 million residents is a complex and costly operation (an estimated $14 billion), but the results yield the basis for how we apportion Congress, distribute more than $400 billion in federal funds and understand basic changes to the number and geographic distribution of U.S. residents.”

Here is some information from “Count on Change 2010”that everyone needs to know:

1. Every 10 years, the U.S. government conducts the Census, an official count of the entire population of the United States. The next Census is scheduled to take place on April 1, 2010.

2. Census data is used to determine the number of seats each state will have in the U.S. House of Representatives and to create voting districts for Congress, state legislatures, school boards and city councils.

3. Federal and local governments use Census information to determine the allocation of billions of dollars of funds to communities for schools, roads, hospitals, senior centers and other services.

4. Every time the Census has been performed, the Census Bureau has failed to fully count Blacks and other people of color. Communities that were undercounted in the 2000 Census lost more than $4.1 billion in federal and local funding.

5. During the 2000 Census, an incredible 628,000 Blacks, and a total of 1 million people of color, were not counted. In contrast, the 2000 Census double-counted the non-Hispanic white population by approximately 2.2 million. We cannot afford to be undercounted in 2010! Record numbers of Blacks and other people of color participated in the 2008 presidential election – let’s use that momentum to make sure we are counted in 2010!

6. You should receive your Census form by March 2010. If you don’t receive it or if you have moved, contact a BE COUNTED Center or your local Census Bureau.

7. Your Census form should take you only about 10 minutes to complete. Include EVERYONE who lives in your household most of the time, including babies, children, the elderly, relatives, friends, immigrants and non-citizens.

8. Your Census information is CONFIDENTIAL. Your answers will NOT be shared with law enforcement, landlords, the IRS, welfare, the FBI or immigration officials.

The racial wealth gap’s larger than ever

The Census form: Send it back!