Part 1: From the front lines 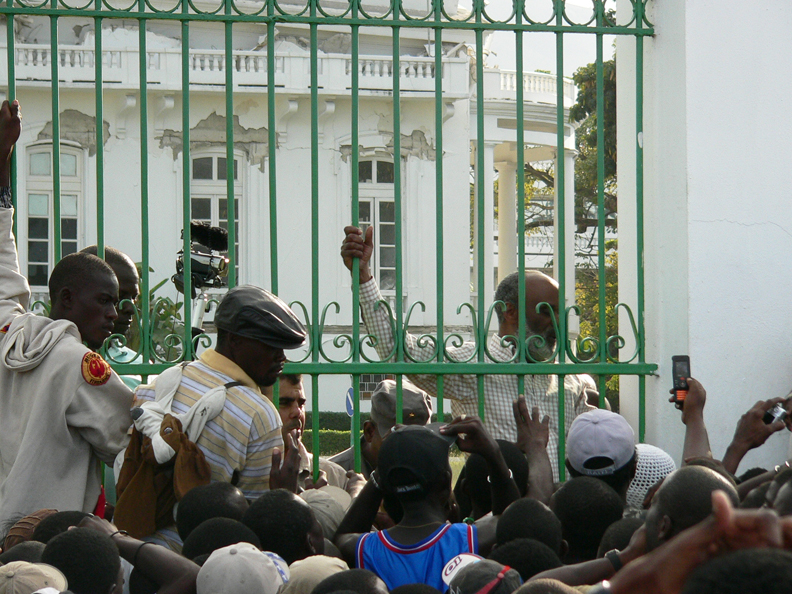 Jan. 31 – It is good to see that some efforts are being made to reach women in desperate need, but those of us on the ground have yet to see this happen in many of the areas where there is desperate need for food and relief. AID agencies MUST find a more humane way to reach out to the women and children who are most vulnerable and desperate. I know that the need is great.

There is no excuse for what is the reality on the ground here in Haiti, as Caribbean citizens have offered help yet many have even been denied entry. It is obvious that the aid agencies – well intentioned as they may be – are unable to handle the scale of the problem here in Haiti. So why are they not being inclusive and involving more Haitian and Caribbean institutions in the relief and recovery efforts?

Something is very wrong about the picture here in Haiti because while international agencies are dropping the ball in an attempt to monopolize aid efforts, Haitians are dying. Apart from lines for women, there is an urgent need for volunteers to go into the camps to reach women, children, disabled and elderly people who are unable to move.

It is a disgrace for so much money to be circling around to all kinds of aid groups and every single day I see so many people hungry, desperate. This situation is simply not acceptable.

There are women in camps who have not had anything to eat for days. There are many available Haitians who are willing to assist as volunteers to get the aid to those who need it and CARICOM (Caribbean Community and Common Market) was willing to send help, but something seems to be really wrong. Why are Caribbean governments not allowed to play a more pivotal role, especially as there are many CARICOM citizens and regional security officers who speak Creole and would be able to communicate better with the people of Haiti.

What I see on the ground is lots of big fancy air conditioned vehicles moving up and down with foreigners, creating more dust and pollution on the roads. Thousands of military officers everywhere, heavily armed like they are in some kind of battle zone. The Girl Guides and Boy Scouts of Haiti are also out in their uniforms, but unlike the army of troops, they are up and about, assisting in many ways. I saw a group of the Boy Scouts and Girl Guides directing traffic today, Sunday!

There are many available Haitians who are willing to assist as volunteers to get the aid to those who need it and CARICOM was willing to send help. Why are Caribbean governments not allowed to play a more pivotal role?

From the very beginning, I have been asking why aid agencies did not arrange separate lines for women, children and disabled people. It is obvious that if you leave people hungry for five to eight days without food, they will be desperate and when food finally arrives, it will be survival of the fittest.

The international agencies allowed confusion to reign supreme for more than two weeks while sensational and racist media people were merrily portraying images of hungry people fighting for food. At least now that they have suddenly realized the need for separate lines, I hope that this happens at every single distribution point, because as I am writing this email, that certainly is NOT the case.

The international agencies allowed confusion to reign supreme for more than two weeks while sensational and racist media people were merrily portraying images of hungry people fighting for food. If something is not done, there will be more demonstrations and, eventually, riots for food. Is that the intention? Is this being done to justify the need for military intervention?

Because of her condition, this expectant mother should never have been left out there on the streets at that advanced stage of her pregnancy because the chances of having a normal delivery in her physical condition were very slim. At the time of the delivery, people were everywhere – men, women, children, all huddled together under those sheets, for shelter from the sun.

If there were complications, both mother and baby could very easily have passed, as no one in the camp had any transport or means of getting the mother to a medical facility. Other mothers were there with their newborns.

This poor mother had nothing – no milk, no clothing for the baby, nothing! A doctor eventually came, but the mother was left there, with her baby, so we brought milk and supplies, including a sleeping bag. I know these are not normal times, but it is exactly for this reason that international aid agencies should be more inclusive and engage all those who are willing and capable of providing support. 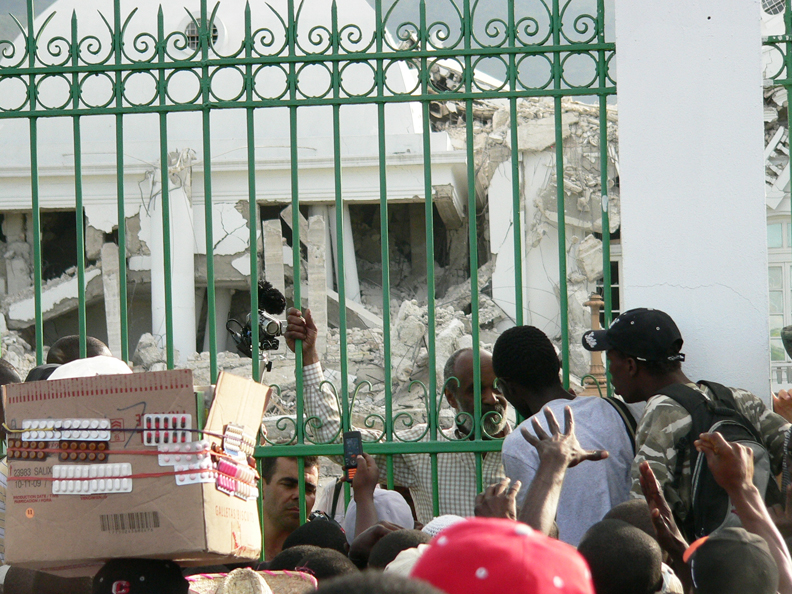 The second incident happened in the heart of Port au Prince yesterday where the largest number of people are living under the most inhumane conditions. I was taking pictures, when suddenly everyone started to run towards the gates of the Presidential Palace.

I stood on top of a vehicle and realized that it was President Preval who had ventured onto the lawn and people starting shouting out to him, saying that they were hungry. President Preval came to the fence and hundreds of people kept running towards the fence.

Many of them were shouting, “Lavalas, Aristide, Lavalas, Aristide.” Several others were asking President Preval why he had not addressed his people and told them what was happening. One woman put it this way: “I have not had anything to eat for four days and no one is hearing anything from the president. We have no idea what our government is doing.”

President Preval spoke to those who were closest to the fence, but the large number of people who were pushing and shoving to get a glimpse of him obviously heard nothing. At least I got a picture of the whole scene, including President Preval behind the fence with hundreds of people right next to him on the other side.

Something about that scene convinced me even more that there is really no need for such a heavy military presence in Haiti. What Haiti needs is an army of medical, civilian and specialist volunteers who will work with the people of Haiti to rebuild their nation – not a heavily armed military of more than 50,000 standing guard over them.

PS: I must express appreciation for the many volunteers from various countries who are giving very genuine assistance to the people of Haiti, but my comments remain relevant because of the reality on the ground. 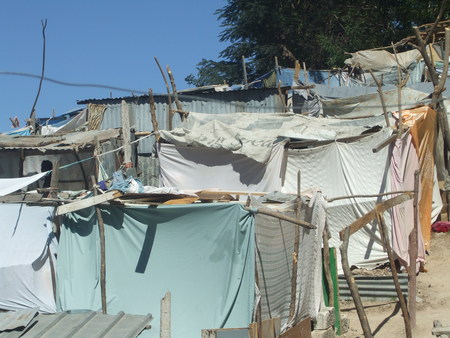 Feb. 8 – If ever there was genocide, this is it! People who are very sick are being left in camps where no help is available.

I interviewed 38 women and every single one of them was hungry. One lady who gave me her phone number said that supplies were only distributed once and since there was pushing and shoving, they never came back to her area. She said that some of the bags of supplies were being diverted to private warehouses, re-packaged and then re-sold to them. She explained how some of this is being done by the elites. She gave me her phone number and asked me to please help them.

Women and children are barely surviving in the camps. Those who are lucky at least have a bedsheet covering over their heads. Some had not seen any supplies for days. Pregnant women are having miracle babies on the bare ground in tents where there is no running water, no chance of getting emergency help if there are complications. 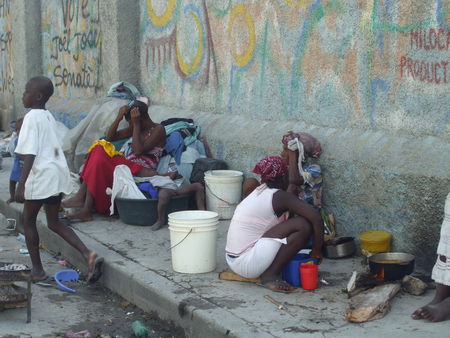 The most painful part is to see sick children and disabled people forced to live on the sidewalks, some with no shelter. I tried hard not to be overcome by the agony in the many areas where human suffering is most severe. A human rights activist in Haiti told me about a newspaper report in France regarding French doctors chopping off limbs when it was totally unnecessary, so someone should check this out.

So many people are starving and hungry. Haitians are demonstrating because too many of them are left without food for extended periods. One must really ask why, when so much has been donated and so much is available for distribution?

I have seen people carrying American labeled bags of rice and other goods. There are distributions in some places and I did see areas where there were lines for women only, but the bottlenecks continue.

Haitians are demonstrating because too many of them are left without food for extended periods. One must really ask why, when so much has been donated and so much is available for distribution?

If something is not done, there will be more demonstrations and, eventually, riots for food. Is that the intention? Is this being done to justify the need for military intervention? People are being pushed to an unacceptable, unconscionable limit. I am very worried about the way people are living, because when the rainy season starts, the genocide by omission will be multiplied many times over. 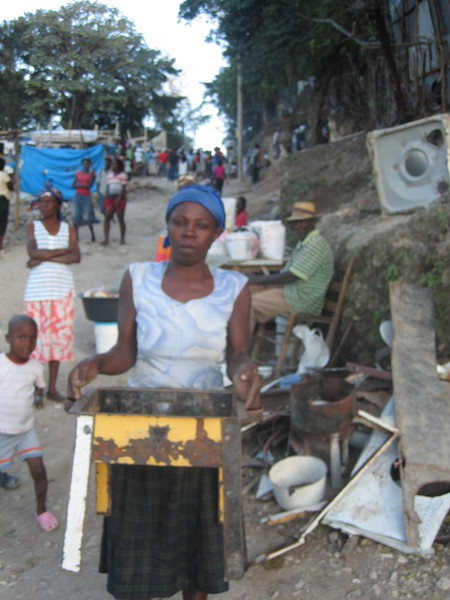 Haitians are the most resilient, most creative people on the planet! I cannot begin to explain here the way people are organizing and helping each other in this tragic situation. One woman made a stove and grill with material from the rubble and it is being shared by the other women in her camp.

I believe that Haitians will overcome, but we must reach out to them. CARICOM can make use of so many of us in the region who speak French and Creole. It is very clear that the international agencies cannot handle the scale of the problem, so CARICOM should ask them to collaborate and provide some of those resources – especially those that Caribbean citizens have been donating – so that Caribbean citizens can assist wherever possible.

I think there is a lesson in this for us in the Caribbean. We need to be more organized for disasters, which can happen to any island, because the same things which are happening to Haiti could happen to any of the islands where we live. And if international agencies do not cooperate with CARICOM, then we should have a campaign to advise Caribbean citizens not to donate to any of those institutions, but rather to a Caribbean Disaster Fund.

CARICOM can make use of so many of us in the region who speak French and Creole. It is very clear that the international agencies cannot handle the scale of the problem, so CARICOM should ask them to collaborate and provide some of those resources – especially those that Caribbean citizens have been donating – so that Caribbean citizens can assist wherever possible.

I see the hope in the children of Haiti. All is not lost. I have a beautiful photo of the baby who was born to a double amputee, thanks to our intervention and support.

In some areas people are beginning to hustle for survival and organize their lives in whatever way they can, all things considered. Some women vendors are already selling produce by the roadside. We can learn a lot from the creativity and tenacity of our Haitian brothers and sisters.

Flavia Cherry can be reached at cafraslu@hotmail.com. She works with ACP Civil Society Forum: News for African, Caribbean and Pacific States. 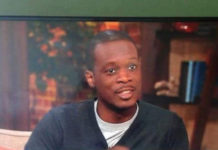 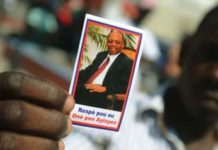