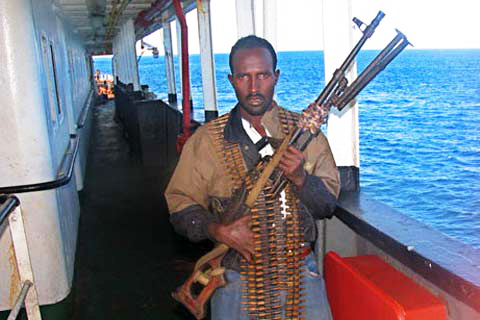 Jan. 21, 2010 (Aporrea.org) – Spokesmen for the so-called Somali “pirates” have expressed willingness to transfer part of their loot captured from transnational boats and send it to Haiti.

Leaders of these groups have declared they have links in various places around the world to help them ensure the delivery of aid without being detected by the armed forces of enemy governments.

The “pirates” typically redistribute a significant portion of their profits among relatives and the local population. In their operations, the “pirates” urge transnational corporations that own the cargo confiscated to pay back in cash, as banks cannot operate in Somalia.

“The humanitarian aid to Haiti cannot be controlled by the United States and European countries; they have no moral authority to do so. They are the ones pirating mankind for many years,” said the Somali spokesman.

Somalia, located at the eastern end of the Somalia Peninsula adjacent to the Gulf of Aden to the North and with the Indian Ocean to the east is located in a very important position in the communication routes between Asia, Africa and Europe and the Pacific.

This story originally appeared in Spanish at http://aporrea.org/internacionales/n149313.html. The English translation appears at http://www.metamute.org/en/somali_pirates_want_to_send_loot_confiscated_from_rich_countries_to_haiti. See www.sfbayview.com for more coverage on the Somali “pirates.”