There are some stories that, no matter how they’re cast or recast, what’s wrong stays wrong until certain directors give the work a nuanced tweak that makes a distinct political difference. “The Taming of the Shrew” by William Shakespeare is such a work. One tames horses and dogs, not people, yet not only is Katherine “tamed,” she is first auctioned off to the man who can make her presentable to society, where rules for behavior are governed by a status quo set by men, often agreed upon by women.

Granted, in Gritty City Repertory Youth Theatre the race and gender binaries are absent, yet the shadow still lingers – patriarchy, partner violence, sexual exploitation. The genius in this marvelous production is the way, despite its theology, alternative spiritual systems have their creative way evident in the dance – tango – in culture – Yoruba – and creative soundtrack. The ambiance continues in the lobby where Haitian visual artist Marc Eddy’s beautiful pen and ink drawings further the discourse started on stage. (His work is also in Baptista’s living room.)

The idea or dismantling of a structural hierarchy is captured within the very architecture, that is, physical walls which a motley crew assemble and disassemble. The walls separate the internal lives of the families from their external persona. The psyche or consciousness and Gritty City’s adaptation of “Shrew” is also multi-layered as characters switch places – servant with master. In one scene, a disappeared father is quite confused and dismayed to find another person occupying a space he once claimed.

In Opening Night remarks, Lindsay Krumbein, director, said that Gritty City trains as an ensemble. What this means is that the talented cast over a yearlong rehearsal process has developed relationships among each other that make it possible for the deep dives and swims along chilly terrain. It is amazing to watch, especially when an actor (Noel Laulu) who was on script – a third character added just a week earlier – shows a level of professionalism seen on equity stages.

The play takes place in New York, maybe Harlem. The time is now. The family, Nigerian American. Katherine (actress Tomorrow Page), the elder daughter, has a reputation of being outspoken and rash. Confident, witty and bold, she is called a shrew, when actually the man, Petruchio (actor Jordan Lopez), who is hired to “tame” her is similarly qualified. The two actors are amazing in their roles – as are the other cast, who sing, tango across multiple philosophical landscapes.

Perhaps this is the attraction between the antagonists – together they make a better team as friends rather than as foes. This is a lesson Kate learns slowly. It is a trial by fire. Petruchio starves her, makes her wear the same clothes daily … keeps her away from family and friends. He humiliates her and Kate lets him so that she can leave the physical prison he has erected around her.

It is a situation some of us find ourselves in all too often as we walk precipices between promotion and termination, safety and danger, life and death. Compromise is often the best route, given such circumstances. The task is to not lose oneself in the process. In this iteration of “Shrew,” I think Kate remains stuck; there is a twinkle in both husband and wife’s eyes but, if you blink, you could miss it.

As in previous iterations this capitulation feels like the woman, Kate, loses. OK, so I cannot find a politically correct way to agree with the mores of the work, but given what Shakespeare left Gritty to work with, again Gritty does a marvelous job. Tomorrow Pages’ Kate and Jordan Lopez’s Petruchio pull it off without too much bloodshed. I love the set design, lighting, videography and costuming too. Petruchio shows up to his wedding in spandex shorts, while the royal Nigerian family fashionistas look fantastic.

Vinnie Bellz, Oakland musician and producer of the mixed soundtrack, should be published. His collaboration with Krombein where Argentinian tango meets Nigerian AfroBeat – the looped tapestry so brilliant if you think you know tango, as in tangled web, this vibe is one you don’t want to miss, especially when Gritty City ensemble dancers weave the transitions.

Gritty City Rep’s “Shrew” is so hip and fun and the choreography is also great. Some of the cast like Keli’i Salvador (Vincentio, Jose) has visible skills. Don’t miss Gritty City Repertory Youth Theatre’s interpretation of Shakespeare’s battle of the sexes, “The Taming of the Shrew,” at The Flight Deck in downtown Oakland at 1540 Broadway through this weekend, May 23-25, 8 p.m. Visit https://www.grittycityrep.org/.

Listen to an interview with director Lindsay Krumbein and actor Nijzah Waterman (Lucentia) on Wanda’s Picks, May 1, 2019: http://tobtr.com/11292775. 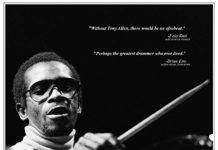