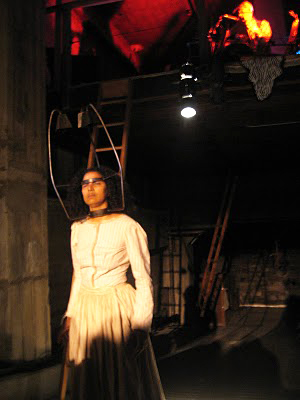 The traffic was horrific Thursday evening when I got into San Francisco. I’d planned to go by TJ’s on Masonic for a salad for dinner, but the traffic was so slow heading for Fell Street, I got off and backtracked to Ninth Street, got the salad and then drove the surface streets to the Buriel Clay Theatre at the African American Center for Art and Culture, 762 Fulton St., where I ate half my salad in the car before getting out.

A large group of young people and other patrons filled the hallway when I entered. I saw a few friends. Someone came out while I was in the Sargent Johnson Gallery looking at the exhibit, “Cultural Odyssey at 30,” to tell us that the play begins in the hall.

Idris Ackamoor, theatre founder, dressed in white with gold accents, blew into a conch shell, sort of like a Pied Piper of the Fillmore, and led patrons up the stairs into an adventure that went on beyond anywhere Alice’s Wanderings took her – the girl should try African Diaspora ancestral memories for themes – but we followed him anyway because it was Idris and we trusted him (smile).

The audience had been divided into groups, but as I’d been in the gallery, I missed this part so I went with the youth up the stairs, past the studios and a frowning man with a rifle, whom I avoided – he looked like he’d shoot – into a loading dock converted into a theatre space – it looked like a slave dungeon – the part where one kisses Africa good-by, the plank just ahead.

Idris continues the soundtrack from a loft space, while a woman, a captured African – a recalcitrant one at that – walks into the space from behind. We can hear her head constraint ringing. For many in the audience, this is the first time we’ve seen this kind of torturous device outside history books or gallery exhibits.

What ensues could be called a dance, but to see this heavy object locked around her neck, spirally up over her head, certainly lets those assembled know this is not a typical theatre experience – we are going to hell. I am on the front row, so I can see. The kid who was there traded places with me and kindly gave me his pillow when I asked (the plank was hard and hurt my hip).

Underneath the deck where Idris sat with instruments and a screen, where projected images enhanced the experience, was a ladder leading up and a dark cavernous chilly expanse. We don’t know what’s down there and frankly, I am not interested in exploring.

Except for Idris’ music and Rhodessa Jones’ occasional lines when she joins Joanna Haigood, there is no verbal discourse. Just two ladders, the dark recesses at the end of the steep ramp where the enslaved woman rolls down the pier in the head restraint (yes!) are the only sites and sounds we see and hear initially.

Then Rhodessa, dressed in an orange prison jumper from South Africa (orange the universal prison attire, like a brand), appears with a whip. All the sensations: cold, hard, eerie darkness, unfamiliar sounds, smells, give the audience plenty to contemplate, especially those in the first two rows where the whip spinning in Rhodessa’s hand over our heads, which she then flicks, we feel, too close to our faces as its breeze and the sting of its impact hits the ground again too close for comfort. But this theme – the Black holocaust – is it supposed to be an idea that brings ease?

Kids jump almost into my lap and I don’t blame them. This weapon is real … threatening. I just make room.

One could feel the atmosphere shift, as the kids settle down, the bantering chatter ceases and the audience resigns into spaces previously occupied by the captive, the overseer, the slave catcher: on the block at the auction, in the ocean floating, on the limb lynched.

No one knew her story, just her name: “Laura Nelson.” Where was she from? She just sprang up. The other one? Watch. This happened on a bridge … go to sleep, little baby,” Rhodessa sang. There wasn’t even time to mourn as we gathered under the tree where Haigood’s body hung. Time shifted between slave transport to Jim Crow America and the Black Codes post emancipation.

We weren’t allowed to dwell in any sensation for long. Negro memorabilia – the huge lips and hips, the bulging eyes – all successful efforts at dehumanizing the captive as piano music surrounded us from the rear (how did Idris get back there?) and it was time to move. People started filing past us. Who were they? more captives? 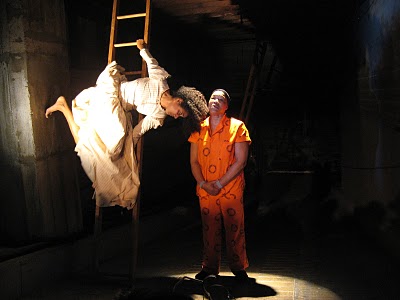 Joanna’s character was spinning on a ladder – her form beautiful in motion as her body balanced on a rung, her skirt billowing out, beauty found within a grotesque state we filed by, her body now slumped over the rung, literally spun.

As I watched Laura spin, I wondered how those filing past got selected to be in the procession … to where? Did I want to go? At first I wanted to go as well and then I saw that the first into the dungeon would be the last to leave. We were all going down into the loading dock … where? onto a slave ship? and if not a slave ship, where were we going? It was all a mystery to me.

Zaccho Dance Company, which Joanna Haigood founded, has created several pieces which look at the slave trade, one in collaboration with the San Francisco Arts Festival a couple of years ago when Rhodessa Jones was artistic director. The piece for SFIAF, called “Arrivals and Departures,” took place at the San Francisco Airport in the International Wing – yes, how appropriate – and looked at Africans newly arriving and those already here and the interchange, both the physical and the philosophical.

There was another Zaccho theatre installation I attended which took place at Fort Baker I’d like to say about 10 years ago, and in this work the audience became captives. I don’t know why I was surprised when I was pulled from the audience in “Breach” – yes, we do finally get to the theatre. I am taken from my comfortable seat and placed on the auction block with two others where the auctioneer tells me to open my mouth – “wide” and “bend over.”

Rhodessa is in the audience trying to get the prices up. I think we are sold for $500. I don’t see to whom, my back to them literally, butt in the air. The experience was transformative. I felt like those ancestors must have felt … scared, in a strange place, polished and cleaned up for the show … and then like that separated from family, land, community … however horrible on the ship. I know the place in New Orleans where the enslaved Africans were chained to posts and sold. It is now a grocery store: Circle Market on Claiborne Avenue. It was damaged during Katrina.

Breach, the word both a noun and a verb. A breached birth is one where the child is engaged butt first, and a breached agreement means that it is not honored. No one asked Rhodessa, Idris or Joanna what “Breach” meant in their context. It could have meant both, especially when the theatre piece shifts to the present – not that the present wasn’t always implied with slavery as the new plantation, HIV/AIDS on Jones’ and Haigood’s T-shirts another type of Maafa or Black holocaust.

I was surprised that many in the audience didn’t know the word and that still others didn’t know about the Maafa ritual in the San Francisco Bay Area for the past 14 years or so. Visit http://www.maafasfbayarea.com.

I really liked the way Cultural Odyssey and Zaccho framed the discussion and the interactive nature of the theatre piece. I agree with Idris: This was nothing new for Cultural Odyssey, a theatre company that promotes art that engages and calls for active participation. Audiences have to work as they spin new paradigms out of old social-political concepts.

We often leave a Cultural Odyssey event feeling disturbed and not at all at ease when the curtain falls and “The End” flashes across the marquee, but that’s what art is supposed to do if it is good art – disturb.

In the theatre, Rhodessa’s last character is a Black woman who has applied for a top position at a corporation; she is first choice for the position. The powerful Black woman is at the top of the ladder, literally – what a different image from the previous one, but is it any different? The woman is chatting with her girlfriends about the party they are going to have when the job is hers.

“The Breach” is non-linear; the corporation job story is mixed with the story of Black urban professionals and Black love and varying definitions on the question Rhodessa sings about, accompanied by Idris, who also engages Joanna in a loving duet, she dancing to his active accompaniment. 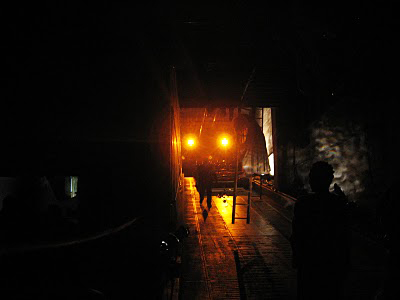 As we walked under the loading dock, Idris tells me later that the building was once a brewery. We saw objects draped in white cloth: “That’s where they keep the bodies,” one young man said to a friend. I asked him to repeat it. I wasn’t sure if I heard him correctly.

Yes, for fans, Idris does tap and play his saxophone at the same time. He also plays a loving Arabic lute. As all this is happening, there are videos streaming on the screen and women swaying from cocoons and hoops. It’s really too much to capture on paper. “Breach” is like Cultural Odyssey’s name; it’s a journey where we heard stories of Alphonzo the Flea and Hurricane Bruce where we learn to “improvise or die.”

“Michelle is from Chi-town. She didn’t sit down. She is running this country. It’s time to get paid.” “How does a Black man know he’s in hell? He doesn’t. It’s all around him.” “Angel, talk to me.” “Dry bones stare in surprise.”

“When I die, halleluia bye and bye, I’ll fly away.” We all sing with Jones. (And then we are brought on stage and sold.)

I can tell you this journey along the breach, but really it’s one you must take for yourself.

Conceived by Joanna Haigood, Rhodessa Jones and Idris Acakmoor, “The Breach,” directed by Acakmoor, with choreography by Haigood, text by Jones and Cecil Brown, lighting design by Stephanie Johnson and set design by Pam Peniston, transforms as it teaches.

I love Rhodessa’s questions at the end when we learn of her topic for her dissertation: the similarity between the slave plantation system and the corporate system. “These bones don’t lie,” she tells her potential employer who is of course taken aback.

“Grant me what I have lost,” she says.

Jones then breaks form and asks the audience: “What does reparations look like to you? Are the corporations that made money (read all of them) responsible for repayment? What about the American government – should it apologize and to whom and what does a tangible apology look like?”

“The Breach” closes this weekend with two more performances: Saturday at 8 p.m. and Sunday at 3 p.m., all at 762 Fulton St. in San Francisco. Visit http://www.culturalodyssey.org/v2/aboutus/.