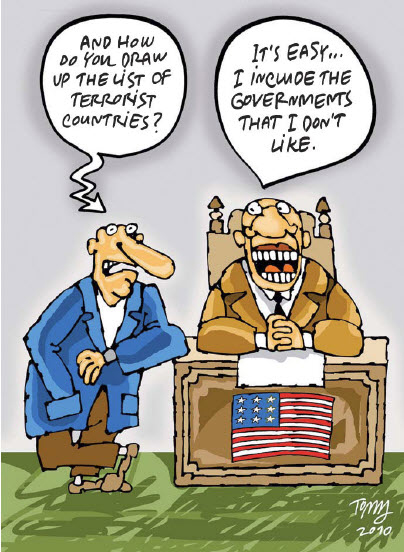 A U.S. Supreme Court case decision from 1886, County of Santa Clara v. the Southern Pacific Railroad (SPRR), is the reason today that the U.S. is a corporate empire.

Many people mistakenly believe that corporations were given the same rights – not just privileges – as persons in this Supreme Court decision, but nothing could be further from the truth. The reason my nation is such a dysfunctional system now is not because of a Supreme Court decision, nor a law passed by Congress, nor a referendum of the people: It’s because of a single statement, one sentence, spoken by a Supreme Court chief justice before the hearing even began.

The founders of the U.S. did not like corporations and for the first few decades of the existence of this nation, corporations were only given limited “privileges” and not “rights.” But after the 14th Amendment to the Constitution was ratified in 1868 – which extended equal protection under the law to all male citizens of the U.S regardless of race – attorneys for the corporations recognized the opportunity that had been gifted to them and started to scheme for corporate personhood.

After many assaults against common law, finally a perfect test case came up before the Supreme Court, the previously referenced case. The case was brought before the Supremes because the SPRR – the Halliburton of the 19th century – objected to the fact the state of California would not allow it to deduct mortgage costs on its vast holdings from its before tax income as could private citizens.

The Supreme Court did not even try that case to grant corporate personhood. The reason corporations now have 14th Amendment protections is because of a statement made by Chief Justice Waite: “The Court does not wish to hear argument on the question whether the provision in the 14th Amendment to the Constitution, which forbids a state to deny to any person within its jurisdiction the equal protection of the laws, applies to these corporations. We are all of the opinion that it does.”

This one sentence changed the frame of North American politics in a very corrupt way. 1886 is when the “noble experiment” of representative republicanism died. Despite some populist stabs at “anti-trust” laws and labor unionism, today we find that the U.S. system of government is “by and for” the corporations.

On Thursday, Jan. 21, 2010, a (little noticed) U.S. Supreme Court decision took our critically ill republic that has been on life support and effectively murdered it.

Our elections have been compromised and the presidential candidates have been chosen for us by the tyranny of the oligarchy for many decades, and we the people of the U.S. are allowed to cast our votes to give us the appearance that we have a voice in our nation. But now with the decision in the recent United Citizens v. Federal Elections Commission even any appearance of representation for the people has been overturned.

In this decision, the Supreme Court removed limits from corporate campaign expenditures stating that even limiting these contributions in the first place put restrictions on a corporation’s First Amendment rights to free speech.

Corporations have long held sway over our government, and the soft fascism of corporate control has been running things behind the scenes.

However, the decision in United Citizens v. Federal Elections Commission that expanded a mouth-less and mindless corporation’s freedom of speech has effectively gagged 300 million more of us that don’t have billions of dollars to buy the votes of our politicians who are just extensions of such crime cartels as Goldman Sachs anyway.

I believe that United Citizens v. FEC will go down in the history books as one of the most important – and most destructive – Supreme Court decisions in U.S. history and we should just drop all pretense at democracy and call our leaders President Goldman and VP Sachs.

Cindy Sheehan is a peace activist and founder of Peace of the Action, an anti-war organization that promotes profound structural change in the U.S. This commentary originally appeared in the first issue of Correo del Orinoco English Edition, Venezuela’s first and only English-language weekly newspaper. Keep up with Cindy at Cindy Sheehan’s Soap Box.