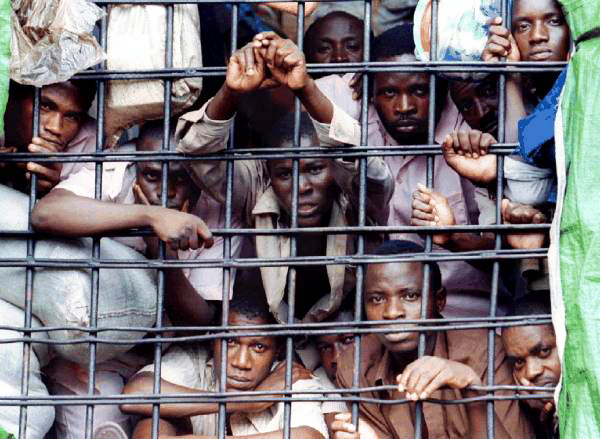 “Genocide ideology” became a crime in Rwanda in 2003, the same year President Paul Kagame officially became Rwanda’s president, with that year’s ratification of the new Rwandan Constitution, which includes Article 13:

“The crime of genocide, crimes against humanity and war crimes do not have a period of limitation.

“Revisionism, negationism and trivialisation of genocide are punishable by the law.”

Today, 62 percent of the people packed into Rwanda’s prisons have been charged or convicted of genocide-related crimes and some of the country’s most admired leaders are being accused of the “genocide ideology” thought crime. Most prominent are Victoire Ingabire, Kagame’s strongest competitor for the presidency, and Paul Rusesabagina, the hero portrayed in the film “Hotel Rwanda,” who is charged with “Double Genocide Theory.”

Article 13 criminalizes not only genocidal violence but also disagreement with the received history of the Rwanda Genocide, which has become a major issue in Rwanda’s 2010 presidential election. Many academics, journalists and human rights investigators, the International Criminal Tribunal on Rwanda and Judge Fernando Andreu of Spain’s National Court now disagree with the received history of who and how many died, who killed whom, who was most responsible and how the tragedy unfolded, but Rwandan citizens who disagree must take care not to do so publicly.

An additional 2008 statute, named the “genocide ideology law,” was passed by Rwanda’s Parliament and published in Kinyarwanda, English and French in the Official Gazette of the Republic of Rwanda.

This enthusiastic article, “Rwanda: New Law to Fight Genocide Ideology,” published in the New Times and then republished on allAfrica.com, says:

“Kigali – Recently, lawmakers voted in a new law aimed to tackle cases of genocide ideology. The draft law was last Friday forwarded to the Senate for scrutiny. Legislators said the law was necessary to help fight the deadly ideology which plunged the country into the 1994 Genocide. The bill is introduced months after damning revelations that showed cases in which school children demonstrated predisposition to the genocide ideology. The Senate had also found rampant genocide ideology in families, schools and some individuals, which sparked the House to react immediately to stop the vice.

“The damning revelations of genocide ideology in schools by the lower chamber of Parliament caused an uproar in the House, which decided to uproot the vice and save the young generation from contamination.

“Under the new law, children under 12 years found guilty will be sent to rehabilitation centres for not more than 12 months.”

“Largely aimed at the Hutu population, such offenses permit, among other measures, the government to send away children of any age to rehabilitation centers for up to one year – including for the teasing of classmates – and for parents and teachers to face sentences of 15 to 25 years for the child’s conduct. The government has repeatedly accused the Voice of America, the British Broadcasting Corporation and other media outlets, as well as Human Rights Watch, of promoting genocide ideology; accusations these organizations deny.”

Rwanda’s rate of incarceration, which is the third highest per capita in the world, is second only to that of the United States and Russia, according to the King’s College 2009 World Prison Population List. The report includes a brief with a summary chart saying that Rwandan prisons hold 59,311 people, 593 per 100,000 people in Rwanda’s population, and that roughly 37,000 of these are “awaiting trial or serving sentences for crimes associated with the genocide of 1994.” (Gitarama Prison, pictured above, is described on Akorra.com, on March 10, 2010, as one of the “Top 5 Most Horrible Prisons on Earth.”)

Didas Gasana, editor of Umuseso, Rwanda’s independent Kinyarwanda language newspaper, made inquiries as to how many of the 62 percent of Rwandan prisoners incarcerated for “genocide related crimes” are accused of speech crime – disputing the received history of the Rwanda Genocide – but said that this statistic is not available and that his sources are “tight lipped.”

Gasana’s own prison sentence, for publishing a story on an elected official’s affair with a bureaucrat, is now on appeal and is being protested by Reporters without Borders.

Rwanda’s government has accused Paul Rusesabagina, the Rwandan exile played by actor Don Cheadle in the movie “Hotel Rwanda,” of being a “revisionist” who “harbors the Double Genocide Theory.” 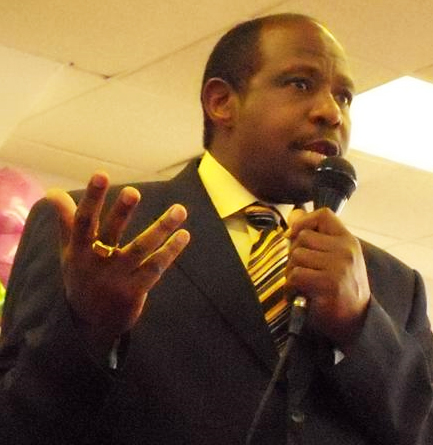 A “revisionist” in Rwanda is someone who dares to challenge the received history of the 1994 Rwanda Genocide. The “Double Genocide Theory” is the belief that Hutus as well as Tutsis were victims of genocidal violence in 1994.

The Rwanda New Times reported on March 12 that the International Criminal Tribunal on Rwanda had ruled that Paul Rusesabagina’s testimony was “not an absolute necessity” at the trial of former ruling party official Joseph Nzirorera.

The report continues: “Theodore Simburudari, the president of Ibuka, an umbrella organization of Genocide survivors’ associations, said that for Nzirorera to ask Rusesabagina to be his witness is evidence in itself that both men have in their agenda spreading the Double Genocide Ideology.”

Much of the world’s emotional response to the 1994 Rwanda Genocide has been shaped by the Hollywood movie “Hotel Rwanda.“ At its end, the Rwandan Patriotic Front (RPF) Army, led by Gen. Paul Kagame, appear as heroes to end the bloodshed, as the movie’s hero, Paul Rusesabagina, departs from a Rwandan refugee camp with his family.

The movie makes no mention of the many political and legal scholars, journalists and human rights investigators contesting the received history of the genocide, including University of Notre Dame Professor Christian Davenport and University of Michigan Professor Alan Stam, who, after many years of study, interviews with survivors and statistical analysis, concluded that :

Professors Stam and Davenport’s Rwandan visas have been revoked.

Nor does the movie mention Kagame’s training at Fort Leavenworth, Kansas, the Pentagon arming his Rwandan Patriotic Front (RPF) army, or the victory of the U.S., U.K. and Anglophone interests over those of France, won by the RPF, as described by Professor Michel Chussodovsky in his Global Research report “Rwanda: Installing a U.S. Protectorate in Central Africa.”

Indeed, the movie ends with this message: “The genocide ended in July 1994, when the Tutsi rebels [Kagame’s RPF militia] drove the Hutu army and the interahamwe militia across the border into the Congo. They left behind almost a million corpses.”

It might therefore seem like good public relations for Kagame and his ruling RPF Party to remain on good terms, at least publicly, with Paul Rusesabagina, the real life hero of “Hotel Rwanda,” which is based on his autobiography, “An Ordinary Man.”

Instead, they have accused him of “revisionism” and “harboring the Double Genocide Theory.”

Kagame and the RPF are coming under more and more international pressure to hold a real presidential election this year, as reported by the London Independent on March 15 in “Rwanda’s Democratic Credentials Under Fire.”

Amnesty International, Human Rights Watch, the Campaign to Protect Journalists, the Global Greens, the European Green Free Alliance, the African Faith and Social Justice Network and U.S. Sen. Russ Feingold, D-Wisc., chair of the Senate Subcommittee on Africa, have all called for civil and political rights and a free and fair election, but authorities continue to deny two of the three major opposition parties permits to convene, register or field candidates.

On March 12, the Hotel Rwanda Rusesabagina Foundation joined the list, issuing a press release that “condemns election related violence in Rwanda and calls for real democratic activity to be allowed.”

Both are speech crimes under the Rwandan Constitution ratified in 2003 and Rwanda’s “genocide ideology” statutes passed in 2008.