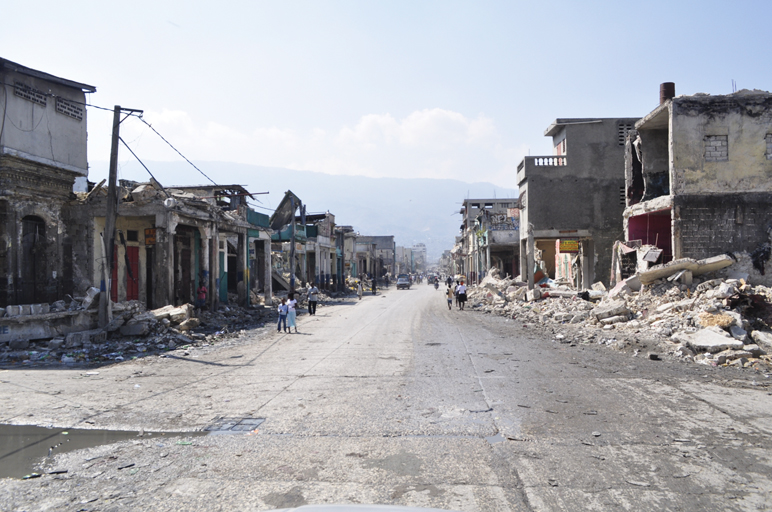 Oakland rapper DLabrie connects with Prisoners of Consciousness Committee (POCC) Minister of Information JR, journalist for SF Bay View and voice of Block Report Radio, after his relief trip to Haiti and year-long battle in Oakland courts based on false charges.

DLabrie: Charges were dropped in your trial in Oakland? Tell us about that.

JR: Charges were dismissed due to lack of evidence. I was charged with felony arson while I was reporting on the Oakland Rebellions, Jan. 7, 2009. I have been organizing against police terrorism in Oakland and around the country with POCC for years. We believe the police were paying me back for years of community service.

DL: Tell us about your recent trip to Haiti.

JR: POCC, Haiti Emergency Relief Fund (HERF) and SF Bay View combined to send a medical and media delegation to Haiti a few weeks ago with the help of Ankh Marketing and Mos Def. We saw people starving and thirsting to death, children malnourished, people living in tent cities, crushed buildings. We smelled remains of dead people in rubble.

Armies from the U.S, Italy, Brazil, Canada, France were patrolling the streets, not giving out food, water, shelter, but trying to intimidate people. For the most part the people’s donated money is not getting to the people on the ground. It might be going to bank accounts of non-profit executives.

I didn’t see Wyclef, Obama’s troops, Clinton-Bush aid. All of that fundraising seems to be for the cameras. Our medical crew provided free healthcare in two clinics to over a hundred Haitians, in Delmas and Cite Soleil districts of Port au Prince. We helped HERF pass out water.

DL: You’ve been working with Haiti for a while. Talk about Haiti pre- and post-quake.

JR: Haiti is one of the poorest countries in the world. First time I went was 2003, with Haiti Action Committee, six months before the U.S., France and Canada backed a coup that overthrew democratically elected President Aristide.

I saw extreme poverty, chattel slavery and people who had to choose whether to feed or clothe their children; naked children played outside. It was a desperate situation then, but at least people had shelter.

Everybody now is being forced by the Haitian government to live outside in mud. There are few paved roads in Port au Prince and in the rest of the country. Government is using force to keep people outside because they’re “scared of people being killed in an after-shock.” People believe it is because they are trying to make people move so the land can be taken and used by foreign corporate entities to build a “new Haiti.”

DL: Is the media covering the Haiti tragedy properly?

JR: Media is talking about looting and the need for security. We didn’t experience that. People in desperate situations were sharing and had common courtesy. Media coverage in the U.S. and international news is aimed at justifying why the aid that Haiti deserves is not reaching people. “No one can work in an unsafe environment” is what media is trying to make the people of the world think.

We’ve seen this before; Hurricane America (Katrina) was only five years ago. It’s New Orleans and Mississippi again, neglecting and criminalizing victims. Venezuela’s President Hugo Chavez said the earthquake was the result of a U.S. government weather weapon. Russian news has reported the same thing. This has not been reported in the U.S.

DL: What could have been done to prevent the death count?

JR: The U.S. and France should give Haiti its $20 billion that it was forced to give France after the Haitians beat the French for independence. Enslaved Africans were forced by the U.S. to pay France for lost property – if Haiti wanted to be recognized by the international community. In 2003, Aristide put out a call before being overthrown for that money to be returned and put into infrastructure, agricultural, economic, environmental and educational development. This is one thing that could have been done.

DL: What do you suggest everyday people, artists and activists do to help?

JR: Give money and support to organizations on the ground that are doing real work, like the Haiti Emergency Relief Fund. Go to see for themselves the conditions. Haiti needs professional people to donate time and expertise to building a Haiti that serves the masses of everyday Haitians.

DL: What do you see as the future of Haiti?

JR: It’s what Haitians and their allies make it. Haitian independence from French slavery is a source of pride to Africans all over the globe for the last two centuries. Haitians helped Simon Bolivar in his quest to unite so-called Latin America against foreign invaders. The oppressors of the world owe Haiti. Now it’s time to pay up. POCC is organizing another delegation to go back to Haiti as we speak, before summer.

Haitian independence from French slavery is a source of pride to Africans all over the globe for the last two centuries. Haitians helped Simon Bolivar in his quest to unite Latin America against foreign invaders. The oppressors of the world owe Haiti. Now it’s time to pay up.

DL: What’s up with Mumia and Oscar Grant cases?

JR: The Third Circuit Court is trying to figure out whether to kill Mumia or give him life. Both choices are unacceptable. We are fighting to free him and many others: Aaron Patterson, Ruchell Magee, Hugo Pinell, Imam Jamil Al-Amin, Angola 3, MOVE 9.

Johannes Mehserle, the cop who pulled the trigger killing Oscar Grant, goes to trial for murder in LA June 7. We have been at the first two court hearings in LA after Judge Morris in Oakland allowed the trial’s venue to be moved to LA. Resistance outside the courthouse is getting stronger. More people in LA are becoming aware of the facts. We want the other officers who were at the murder scene to be charged with murder also.

DL: What projects do you have coming up?

JR: We’re releasing our documentary on the police killings of Oscar Grant and Lovelle Mixon, as well as my bogus arson case, called “Operation Small Axe.” We also have a Haiti film called “Haiti: Rising from the Ashes” documenting what we saw.

I am working on a book of my favorite articles that I have written called “Block Reportin’” and helping Angela Carroll book showings for her new film, “Angela Y. Davis Radical Pedagogy.”

We’re doing report-backs to tell people about Haiti. I hooked up with Rob Redding and I have a weekly Block Report segment on XM Power 169.

For more info, visit www.blockreportradio.com, www.sfbayview.com and, to donate to Haiti where help is needed most, www.haitiaction.net/About/HERF/HERF.html. And watch an extended preview of the video, “Haiti: Rising from the Ashes,” at http://vimeo.com/9820288 or … right here:

Haiti: Rising from the Ashes documents the coalition efforts of a Haitian and Black group from America team sponsored by the Prisoners Of Conscience Committee and HERF. The team is comprised of medical personnel, journalists, and filmmakers providing aid despite the blocking efforts of the United States, French, Canadian, and Brazilian military. Duration: 13min extended preview. Feature film due to be released June 2010.