An update from the Aristide Foundation for Democracy 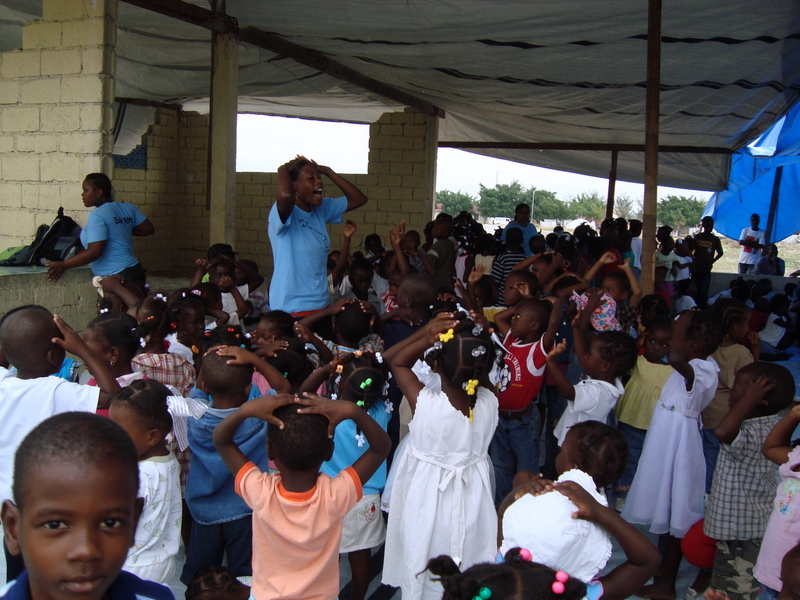 When the Aristide Foundation for Democracy launched our mobile school project in late February we wanted to do two things quickly: support children living in refugee camps across Port au Prince and offer immediate employment to young Haitians at a time when the whole economy has collapsed. With generous support from the Haiti Emergency Relief Fund, we were able to get schools up and running very quickly. Since late February we’ve been running mobile schools, three hours a day, five days a week, serving 1,260 kids in five refugee camps in the earthquake zone.

This project has surpassed our expectations at every level.

First the amazing compassion, vitality and professionalism of the 102 monitors we called on to staff the project has inspired us. The monitors are mostly young people who were students at the language and computer school of the Aristide Foundation at the time of the quake. Many of them have lost their houses and are facing terrible difficulties in their own lives.

The coordinator of the mobile schools at the Tarpage encampment in Tabarre, Mirlande Janvier, was buried under the rubble with her son for two days after the quake before being rescued by her neighbors. Nevertheless she’s working full-time running the mobile schools in her community. All the monitors and staff come to work every day with incredible energy and love for the kids they are working with. In March they got a boost when Leah James, a social worker from the University of Michigan, did a training with them on how to support children suffering from the trauma of the quake. (See her story on the Huffington Post here.)

Second the overwhelming response of the families in the camps has humbled us. Parents and community members quickly came together to build the shelters in which classes are held. At each site when we opened there was a massive press of parents desperate to get their children into the schools. We knew we were offering a very modest program – under canopies in the open air, without books or professional teachers. The parents saw this as something far more profound – a chance, a future, some hope for their children. Here are a couple of testimonies from parents:

Esau, 31, Nazon: I thank God every day that my children can continue their education here at the school. You spend your whole life working to build a home to make life better for your children and then in a moment the catastrophe takes all that work away from you. We moved from our house because there were a lot of cracks in the walls. The concrete split open and was hanging from the ceiling. It was not safe anymore. First we stayed [in a camp] near the airport but it was very crowded so a month ago we moved here (to Nazon). When the director accepted my children to attend this school, I was so very, very happy because I want them to continue learning and getting an education. It’s good for them to go to school to have a normal life like children should have. It helps them be more confident.

Marjory, 28, Tabarre: At the school my daughter learns to count, to say the alphabet and also she learns hygiene. When I come to walk her back after class she sings to me the songs they sing in the school. Her favorite song is “Head, Shoulders, Knees and Toes.” Now she knows all the parts of her body and the days of the week and months of the year. She is very clever and is learning everything very quickly. The teachers at the school are caring and love each of the children. They know what are the strengths of each child and they try to help each child. Going to school helps children forget about the earthquake for a short time. It’s good that the school is outside because the children will not go indoors. When there are aftershocks, the teachers calm the children.

We planned to take no more than 800 kids – we ended up with 1,260. We had to draw the line there because we simply don’t have the money to do more, but school coordinators in each camp continue to report getting pleas from parents every day to take their kids into the schools.

And then of course the kids themselves are amazing. They arrived from the first day in clean clothes, every child with shoes on. How is that possible when we know the kind of misery these families are living in? Well, Haitians have always sent their children to school with pride and dignity – even an earthquake, even the misery of the camps, cannot shake that. Watching the kids sing, dance, play, laugh, smile has been healing for everyone involved – kids, monitors, coordinators, parents. It’s a cliche perhaps to say that children are resilient, and yet they are, and they are the future of the nation.

When we opened the schools, we thought, we hoped, we prayed that food distribution to families at refugee settlements would become more dependable. This has not happened. In none of the five camps where we are working is food distribution regular or sufficient to meet the needs of those living there.

The children arrived from the first day in clean clothes, every child with shoes on. How is that possible when we know the kind of misery these families are living in? Well, Haitians have always sent their children to school with pride and dignity – they are the future of the nation.

Two of the settlements – at Nazon and at Fontamara – report that the Aristide Foundation was and is the first and only aid agency of any kind to come to where they are. These two camps are not on main roads – though they are smack in the middle of Port au Prince – but even at Carradeux on the campus of UniFA (the medical school of the Aristide Foundation), at Tapage in Tabarre, and at Building 2004, a stone’s throw from the airport, there is nothing resembling regular food distribution. 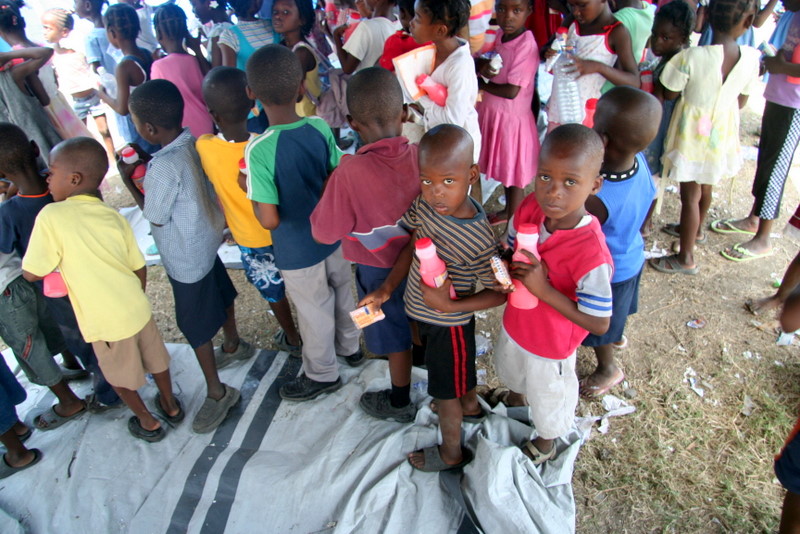 This is the situation across Haiti. The aid is simply not getting there. For a clear picture of the failure of the relief effort to meet even the most basic needs of the Haitian people, watch the short video put together by the New Media Project and sign on to the petition being circulated by the Institute for Justice and Democracy in Haiti calling on the major aid agencies to do better with our money in responding to the crisis in Haiti – and to include the voices of the Haitian people in recovery plans. Go to http://www.change.org/haitijustice/petitions/view/we_can_do_better_for_haiti_demand_transparency_and_improved_aid_distribution.

The grim reality in the refugee camps of Port au Prince right now is hunger. The snack we provide in the mobile schools is for many kids the only meal they get that day. That is both totally unacceptable and the situation we are forced to confront. Naturally children line up more than once, or stash away snacks for their parents. And yet, somehow the AFD monitors and coordinators along with the families in the camps have established enough discipline to run this project – including a daily snack distribution for the children right in the midst of camps of starving people.

There have been no major disruptions – a profound measure of how committed these communities are to making these schools work for their kids. The Aristide Foundation is committed too – to staying in the camps and working alongside the majority of Port au Prince’s inhabitants as we have for the past 14 years.

Needless to say, we aren’t getting help from the major aid organizations. Perhaps that will save us. The mobile school project along with every other project of the Aristide Foundation is Haitian-led and Haitian-staffed. There is dignity in that. In the end only Haitians can lead the way out of this catastrophe.

Online donations to support the mobile schools and other earthquake relief efforts of the Aristide Foundation for Democracy can be made at www.AristideFoundationforDemocracy.org. Or mail checks to: Aristide Foundation, P.O. Box 490271, Key Biscayne, FL 33149. All donations are tax deductible and will be acknowledged.

If you are interested in establishing sister school relationships between schools in the U.S. or elsewhere and the mobile schools in Haiti, email us at AristideFoundation@gmail.com.

Donations to the Haiti Emergency Relief Fund will also assist the work of the Aristide Foundation. Donate online at http://www.haitiaction.net/About/HERF/1_12_10.html or donate by mail: Make your check out to “Haiti Emergency Relief Fund/EBSC” and mail it to East Bay Sanctuary Covenant, 2362 Bancroft Way, Berkeley, CA 94704. All donations are tax deductible and will be acknowledged.

Laura Flynn is a member of the board of the Aristide Foundation for Democracy-US, which supports the work of the Aristide Foundation in Haiti. AFD-Haiti was founded by Jean-Bertrand Aristide in 1996 on the principle that to bring real change, democracy must include those at the margins of society: street children, market women, landless peasants, restaveks (children living in Haitian households as unpaid domestic laborers), the urban poor. For 14 years the foundation has dedicated itself to providing educational opportunities and opening up avenues of democratic participation for those who traditionally have had no voice in national affairs and no access to education. It seeks to echo and amplify the voices of the Haitian people on a national and international level. For more on the current work and history of the Aristide Foundation – and lots of great photos from the mobile schools – visit our website: http://www.AristideFoundationforDemocracy.org. 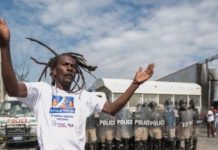