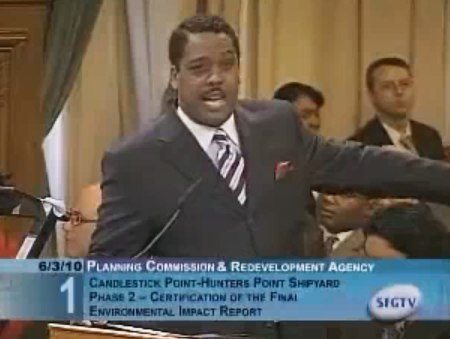 It’s not too often you see a lot of Black leaders willing to take a stand these days.

I was recently tagged on Facebook in the posting of a video of Nation of Islam Student Minister Christopher Muhammad speaking before a joint meeting of the planning and redevelopment commissioners on June 3 in San Francisco. This footage has the internet buzzing as Minister Christopher called the commissioners and members of the Board of Supervisors “paid prostitutes” and “political whores” (his part starts at 5:10).

For those uninformed, the beginning of the video gives insight into this fight by residents of the San Francisco Bayview Hunters Point community against proposed redevelopment by Lennar, one of the nation’s largest homebuilders. The Black people fear that this is a tactic for gentrification and that this move would also lead to further exposure to more toxicity.

Minister Christopher and others have been appealing to local politicians for the past few years but it has fallen on deaf ears because many believe that the city’s leaders have been bought off by Lennar.

“My initial thought was not to even bother – because I’m talking mostly to political prostitutes,” said Minister Christopher. “This city is rotten to the core! There’s no principles here. There’s no moral compass here. There’s no character here. Most of the people who run this town are political whores.”

I will let you watch the rest.

But check out how Minister Christopher is already leaving the room when some White man has to get the last word by saying, “Would you please leave the room?”

Related links to feed your mind:

Jesse Muhammad is a staff writer for the Final Call newspaper, known for his coverage of the Jena 6 and Hurricane Katrina survivors, and an award-winning blogger. Email him at jesse.muhammad@gmail.com and visit Brother Jesse Blog at http://jessemuhammad.blogspot.com, where this story originally appeared. The video – excerpts from the official city video of the joint hearing by the Planning and Redevelopment Commissions – was posted to YouTube by Ahmad770.