“We are living in the mud. We are wet and we are hungry. Those in charge have left us without hope. If they have a plan, we do not know it. We are asking about the future. And we want our voices to be heard.” – Suzette Janvier, a resident of St. Martin, a neighborhood of central Port-au-Prince 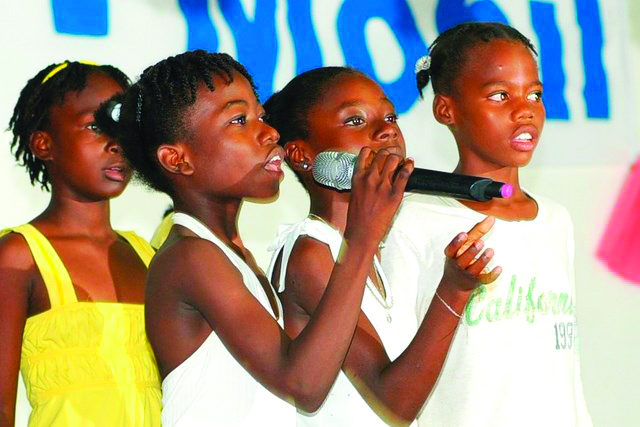 Each Saturday for the past two months a thousand or more Haitian earthquake survivors have met in the auditorium of the Aristide Foundation for Democracy to talk about the future of their country. Since its founding in 1996 the Aristide Foundation, whose auditorium seats up to 3,000 people, has provided a place for grassroots activists and ordinary Haitians to come together to debate and discuss national issues.

In response to the earthquake, the foundation is sponsoring weekly public forums in which participants tell their stories, talk about the conditions of their lives and describe their needs; they receive training or information on the current situation and on their rights under the Haitian constitution and the United Nations principles on Internally Displaced People; and together presenters and participants brainstorm and discuss actions that can be taken to make their voices heard. Each forum has drawn between 900-1,500 participants; the majority of those attending are living in spontaneous settlements across the earthquake zone – as are the majority of the citizens of Port-au-Prince. Delegations come from other parts of the country as well, particularly the South and Southeast – Jacmel and Les Cayes – which were also hit hard by the quake.

Participants at AFD forums have offered vivid testimony about conditions of life in Port-au-Prince since the earthquake. Now that the rains have begun, people describe spending the nights “domi pandeye” (sleeping while balancing upright), standing under their plastic sheeting because there is no room for everyone to be sheltered and lie down and because water floods the tents.

During the rainy season, which has already begun, it rains nearly every night. In the morning the sun blazes. The heat under the plastic sheeting – which is all most people have to protect themselves – is stifling. They are now living in “labouye” (the mud) 24 hours a day, in camps almost uniformly lacking in latrines or other sanitation.

They describe the struggle to feed their families. The price of basic foodstuffs – rice, beans, cornmeal, cooking oil and charcoal for cooking – have risen 15-30 percent since the earthquake, while incomes have all but disappeared. Only those receiving funds from family overseas are able to purchase food.

For those dependent on international aid, finding food for their families is an unending labor. Coupons for food might be distributed in the camps once a week, though not to everyone and not with predictability. Women who were able to get the coupons must then go to a different site, often miles away, and line up long before the sun rises. If they are lucky, by noon they might receive a 50-pound bag of rice, which must then be carried or transported back to where they are living. 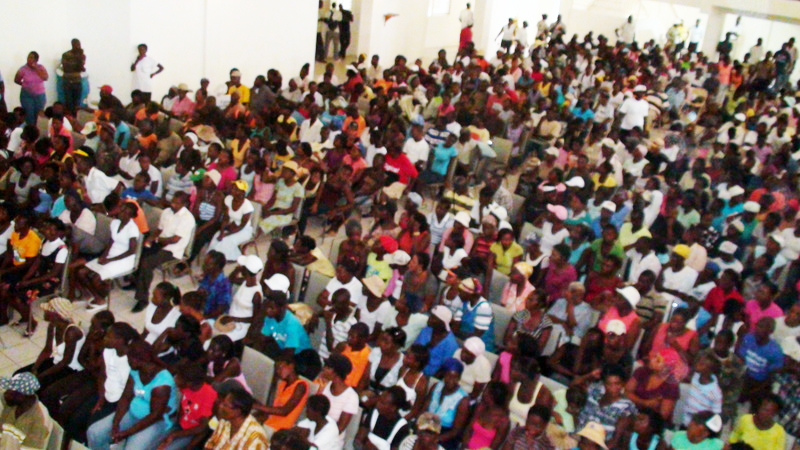 The next day the same struggle might begin again this time to find cooking oil – one day spent in line waiting for the coupons, another day to travel to where the oil is being distributed, in a completely different location than the rice. Often these ventures yield nothing: There aren’t enough coupons to go around, the rice runs out, the distribution center has been relocated or it does not open due to security concerns. And with the rains, bags of rice get wet and spoil.

Participants describe with horror a dramatic rise in prostitution – young women and girls selling their bodies to feed themselves and their families.

They describe the dire health conditions in the camps where infectious diseases are poised to run rampant. Each Wednesday since March 10, 2010, the Aristide Foundation has held a large free clinic in the auditorium of the foundation, providing primary care services to 1,200 people every week. What AFD doctors see and hear from patients in the clinics confirms the testimony in the forums – that is, high rates of illness that result from the conditions in which people are living: malnutrition, diarrhea among children, urinary tract and other infections.

The first demand of those who have gathered at the AFD in the forums is for temporary housing in safe and sanitary locations. The second is for food. Beyond this, jobs, education, healthcare and – despite the fact that most of the participants are urban – they are demanding real investment in agriculture for food production that can one day offer food security to the country.

Underlying all of this, participants in the forums are asking to participate in the planning of the nation’s future – the necessary precondition for real recovery. Those gathering at the AFD feel more intensely than ever before a profound sense of exclusion.

Certainly there was no attempt at consultation or participation with Haiti’s vibrant and engaged grassroots organizations in the preparation of the PRND (Post-Disaster Needs Assessment) put forward by the Haitian government to the international donors conference on March 31. On the eve of the donor meeting, on March 27, over 1,200 people met at the AFD for a debate focused on the constitution – specifically the constitutionality of the creation of the 20-person Interim Commission for the Reconstruction of Haiti, dominated by foreigners, which will oversee all international funding.

Participants in the forums are asking to participate in the planning of the nation’s future – the necessary precondition for real recovery.

The next, even larger, forum focused on the plan by the government of Haiti to extend its emergency powers for 18 months in order to allow the Interim Commission to be created and to exercise extra-constitutional powers. Fourteen hundred people gathered, and most expressed deep concern over the repercussions for Haiti’s sovereignty. This was followed by three days of sit-ins of 500-600 people at the Haitian parliament to protest the passage of the law.

In addition to preparing the plan and creating this Interim Commission without participation, there has also been almost no communication about what might be in that plan. People coming to the forums at the foundation have all heard there’s a plan. They have no idea what is in it. They hear billions of dollars were pledged in New York. They have little faith this money will be given and no faith that what is given will be spent in their interests.

The issue at the top of everyone’s mind is the question of temporary resettlement, of moving people out of the way of the clear and present danger that the coming more intense rains represent. But three months after the quake, no clear message or plan has been articulated by the Haitian government or international NGOs.

In early April there were several reports of forced removals of people encamped on the grounds of private schools, private property and the soccer stadium. At some sites bulldozers arrived without notice to tear down shelters and families were left with no place to go.

To date it appears the only voluntary relocation which has had any success is at Corail, where over the last week or two the Haitian government in collaboration with international NGOs has begun to move people from the Petionville golf course – where more than 45,000 people were encamped – to a relocation center at Corail, but this camp is only intended to hold 7,500 people.

Over 1 million people are estimated to be homeless in the metropolitan area. If there are plans for temporary shelter for anyone other than those on the golf course, they are not being communicated to the general public. Those gathering at the AFD express fear that they will be forcibly evicted from the camps where they are living.

They are also skeptical about plans to relocate people to remote areas, which would leave them cut off from the economic life of the city, meaning cut off from the mutual aid provided by families, communities, neighborhood associations and the informal economy. Mutual aid and the informal economy are the only things that keep Haitians alive. That was true before the quake and it is still true.

Efforts to assist must empower Haiti’s powerful networks of mutual aid and the informal economy – not dismantle, not ignore them. What would it mean to empower them? Community kitchens in the camps, loans to women to restart “ti komès” (informal sector commerce), relocation for those in imminent danger with their participation, finding ways of keeping people close to the city if that is what they desire. 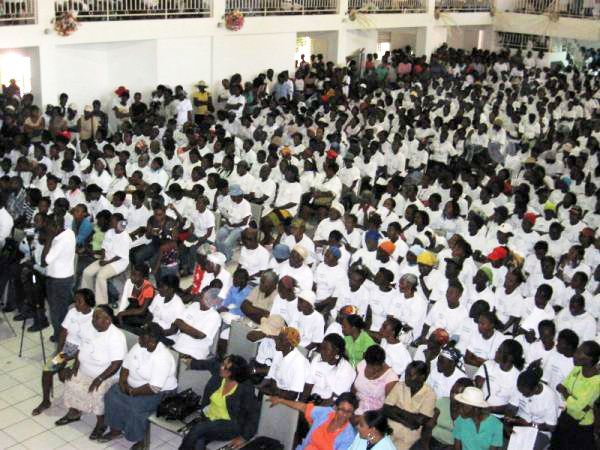 And if, as we hear, decentralization is a goal for Haiti’s future, then who is talking to the residents of Port-au-Prince about lives they might imagine outside the city? And why out of $12.2 billion requested in the Post Disaster Needs Assessment was only $41 million or .3 percent allocated for agriculture and fisheries, i.e. for local food production?

Forums at the Aristide Foundation, held on March 13, March 20, March 27, April 3, April 17 and April 24, along with the International Women’s Day event on March 8, attended by 3,000 women, represent the largest indoor gatherings of Haitians to discuss and debate the country’s future since the earthquake. We are not aware of any occasion since Jan. 12 where the Haitian government, the U.N. or any international NGO planning Haiti’s future and the distribution of aid funds has brought large groups of Haitians together to ask for their opinions, their input or their stories.

Finally, those attending the forums at the AFD are unanimous in their call for the return of former President Jean-Bertrand Aristide to Haiti. It is best summed up by Jean Vaudre, a community organizer from Bel Air, who said at the forum on April 17, “If Aristide were here, even if he had no money to help us, he would be with us, in the rain, under the tents. If he were here, we might believe, we might have hope that we will be able to participate in the future of the country.” Hope is a commodity in short supply right now in Haiti. Is there some way of rebuilding the country without it?

Laura Flynn is a member of the board of the Aristide Foundation for Democracy-US, which supports the work of the Aristide Foundation in Haiti. AFD-Haiti was founded by Jean-Bertrand Aristide in 1996 on the principle that to bring real change, democracy must include those at the margins of society: street children, market women, landless peasants, restaveks (children living in Haitian households as unpaid domestic laborers) and the urban poor. For 14 years the foundation has dedicated itself to providing educational opportunities and opening avenues of democratic participation for those who traditionally have had no access to education or voice in national affairs. Since the earthquake, the AFD has mobilized its staff, doctors, volunteers and supporters – nationally and internationally. The AFD is operating mobile schools in five refugee camps, participating in mobile clinics and providing medical care to 1,200 people at the AFD each week. For more on the current work and history of the Aristide Foundation, visit www.AristideFoundationforDemocracy.org.