At a press conference Monday, July 12, on the steps of San Francisco City Hall, Louisiana environmental attorney Monique Hardin and environmental scientist Wilma Subra challenged the Environmental Impact Report for Lennar’s proposed development in the Hunters Point Shipyard. A speech by Jose Luis Pavon warning that the promise of jobs is empty because the project is exempt from local hire laws was disrupted by a pro-Lennar faction advocating for employment. – Video courtesy Brother Leon Muhammad, dean of Muhammad University and former chair of the Hunters Point Shipyard Restoration Advisory Board (RAB)

More than 200 Bayview residents and allies filled City Hall to demand that the Shipyard be FULLY cleaned before any redevelopment proposals are considered at the site. The hearing was a historic moment in the growing racial and environmental justice grassroots movement in San Francisco. 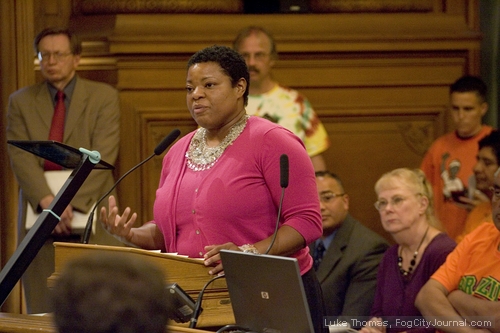 Bayview residents were joined by nationally acclaimed environmental scientist Wilma Subra, who is the leading scientist fighting the British Petroleum oil spill crisis in the Gulf Coast. Subra has decades experience fighting alongside communities around issues of health protection and cumulative impacts of toxic exposure. In fact, she was the scientist who worked with Lois Gibbs and the community in Love Canal, New York, in the fight that created the Superfund law (CERCLA) in the 1970s. (Find out more.)

The Supervisors voted to deny the appeal of the Final Environmental Impact Report that Wilma Subra and other leading scientists, national human rights lawyers and residents clearly demonstrated is inadequate, inaccurate and incomplete.

The EIR passed with a 8-3 vote at the Board of Supervisors. The eight NO votes to deny the appeal of the EIR were cast by Supervisors Sean Elsbernd, Michela Alioto-Pier, Carmen Chu, Bevan Dufty, Sophie Maxwell, David Chiu, Ross Mirkarimi and David Campos.

POWER and environmental justice allies thank and acknowledge the progressive Supervisors Eric Mar, John Avalos and Chris Daly who voted to oppose the EIR and endured incredible pressure from the opposition. We thank them for their principled integrity and their steadfast commitment to defend progressive values, environmental and racial justice.

POWER and allies also thank the Chinese Progressive Association, SOMCAN, Mujeres Unidas y Activas, GreenAction for Health and Environment Justice, Conscious Youth Media Crew, Poor Magazine, the Nation of Islam, Monique Harden and Advocates for Environmental Human Rights, Valerie Tullier and many others who filled City Hall with us into the late hours of the night. Lennar and the Mayor’s Office are pushing this project as fast as possible in order to settle Lennar’s growing financial problems. (Find out more.) 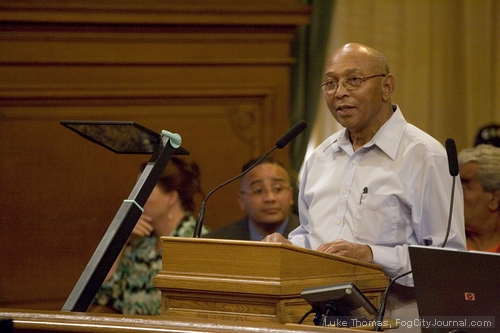 Labor Council leaders, the San Francisco Organizing Project (SFOP) and ACCE (formerly ACORN) have also allied with the Mayor’s Office and Lennar because they believe that the project will create jobs and community benefits.

In our analysis, this vote by the Supervisors to accept the EIR opens the door for the community and workers to be exposed to toxic contamination at the Superfund site before cleanup is complete. In addition, the massive condominium development will further the crisis of African American displacement out of San Francisco.

During the hearing, the Planning Department acknowledged that some the “below market rate” housing is set at such a high income level that it is actually ABOVE market rate.

Our fight to influence the future of this massive development deal is far from over. The Lennar Corp. could face legal challenges if it moves forward the development project with a cover-up, not a full cleanup. POWER is building relationships with progressive planners who can help to advance development projects which serve the Bayview community.

Check out some news coverage from the hearings this week: