by Women of Color in the Global Women’s Strike, Bay Area Campaign to End Israeli Apartheid 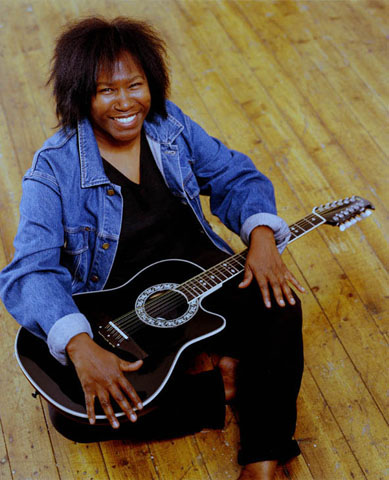 Joan Armatrading’s statement posted on her homepage calling on leaders of Israel and Palestine, Benjamin Netanyahu, Mahmoud Abbas and Khaled Meshal, to “take that step” to solve “the problem” is a backwards way of acknowledging protests of her recent concert in Tel Aviv, Israel. When she plays San Francisco at the Palace of Fine Arts on Tuesday, Aug. 10, we want her to know that to flagrantly disregard the Palestinian call for academic and cultural boycott is to take a stand with racism and apartheid.

Armatrading played just days after Israeli commandos murdered at least nine unarmed human rights activists on the Free Gaza Flotilla and wounded many others. Hundreds of thousands worldwide have been protesting against this shameless brutality.

Those of us who know what it’s like to have suffered racism have an even greater responsibility to demonstrate support and compassion for other people of color whose lives are on the line. In 2005, a united call for boycott, divestment and sanctions of Israel was endorsed by over 170 Palestinian civil society organizations (www.bdsmovement.net).

Cultural boycott (www.pacbi.org) is an essential component of that call. As it states on the BDS Movement website: “By refusing to participate in cultural exchange, artists and cultural institutions globally can send a clear message to Israel that their occupation and discrimination against Palestinians is unacceptable.”

According to the Palestinian Campaign for the Academic and Cultural Boycott of Israel (PACBI), Joan Armatrading performed in an amphitheatre located in a park that was a 1940s training camp of the Irgun, a Zionist terrorist force that perpetrated the 1948 ethnic cleansing, resulting in the forcible displacement of the overwhelming majority of the indigenous Palestinian population from their own homes, villages, homeland.

Today these refugees, the largest refugee population in the world, are being denied the right to return to the homes from which they were expelled. Ethnic cleansing continues to this day, including in the current expulsions of Palestinian people (Bedouin) from the Negev and from the Galilee and Jerusalem, including last week’s destruction of the village of Al Farisyie in the Jordan valley by Israeli armed forces.

We must stand against Israeli apartheid: the bantustanization of Palestine, the brutal pass laws, ID cards and check points, compelling Jewish-Muslim couples and their children to live apart, Jewish-only roads, Jewish-only settlements; the Apartheid Wall tearing families and communities apart and separating farmers from their land; the theft of houses, land, water and other resources; and the denial of legal rights, including the use of torture of those in “administrative detention” and of “extra-judicial killing” – that is, death squads.

And we cannot forget the bombing of Gaza. All of us shared a desperate outrage at Israel’s use of F-16s, drones, white phosphorous and depleted uranium; its murder of 1,400 people and the wounding and maiming of thousands more, including hundreds of children and others who were unarmed or holding white flags; its bombing of schools and hospitals; its decimation of animal and bird life; and its poisoning of water and air – poisoning life itself.

We are calling on everyone concerned with justice to write, call, leaflet and otherwise demonstrate to Joan Armatrading, who wrote a tribute to and performed for Nelson Mandela, that she can’t play us. Protests have already taken place in Scotland, in Bradford (UK) and in Virginia at her first gigs following her visit to Israel. Help us send a message to Joan Armatrading. Show her and other would-be Israeli apologists that they can’t hide.

Write to Joan Armatrading at admin@armatrading.co.uk or www.joanarmatrading.com/index.asp?m=misc&n=contactus&p=1. Write to her record label at inquiries2@slgmusicus.com or www.429records.com/sites/429records/contact.asp and phone them at (310) 451-0451 in Santa Monica.