by Marie-Claire Faray and Marie-Louise Pambu 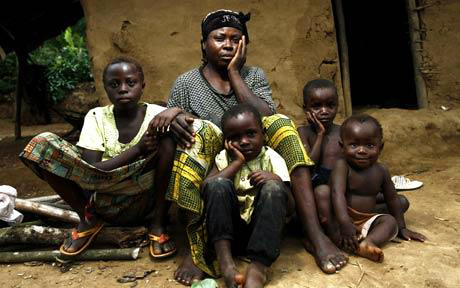 London – We take this opportunity on this day, Sept. 7, 2010, marked by the meeting of the United Nations Security Council (UNSC) on the recent case of mass rape in the Democratic Republic of Congo (DRC), to denounce this war of low intensity imposed on the Congolese population in the east of their country. The femicide, rape, atrocities and degrading and despicable human insecurity and fear now characterize the climate of life of people in Ituri, North and South Kivu and across the DRC in a strategy and complicity to balkanize the country.

We witness and express on one hand our solidarity and the other our concern for innocent Congolese people, particularly women, old and young girls who fell and still fall under the throes of armed conflict. Many of them live in permanent human insecurity, suffering from sexual and gender-based violence, kidnapped, tortured, raped, starved, wounded and wandering in the forests, mountains, valleys and Internally Displaced People (IDP) camps beyond the borders and fleeing the inhuman treatment they face unfairly. This situation has hurt the very principles that underlie the universal values of human rights, dignity and democracy.

We bitterly regret the numerous reports on the appalling number of victims of violence and crimes committed – truly unprecedented: 5.4 million dead – and no effective protection of people, especially women, has really been provided by the Congolese authorities and the United Nations Organization Stabilization Mission in the DRC (MONUSCO, formerly known as MONUC), mandated by the UNSC. We recall that for over a decade, the Congolese populations in Ituri, North and South Kivu have been suffering the consequence of the fratricidal conflict between ethnic Rwandans – Hutu and Tutsi – who were exported onto Congolese soil by mandate of Operation Turquoise by the UNSC in 1994.

Under the pretext of self-defense, Rwanda officially invaded the DRC and engaged in genocidal killings of civilians and Congolese and Rwandan refugees and took this opportunity to plunder Congolese natural resources. This incited the greed and lust of other countries bordering the DRC, including Uganda. This in turn gave rise to a regional war on Congolese soil, which included more than seven foreign countries, including the Rwandan and Ugandan armed forces, who fought a fierce battle with international impunity, despite numerous reports of Congolese civilian casualties.

Under the pretext of self-defense, Rwanda officially invaded the DR Congo and engaged in genocidal killings of civilians and Congolese and Rwandan refugees and took this opportunity to plunder Congolese natural resources.

We condemn both the hegemony of certain countries, particularly those under the protection of permanent members of the UNSC, the enslaving, dehumanizing and genocidal practices of capitalist multinationals outlawed in the 21st century, and the complicit silence against this attack on the body and mind of Black Congolese women which destroys the entire Congolese society and prevents communities from having peace and developing and living in dignity and understanding.

Failure to assist persons in danger is a crime, and we accuse the UNSC through MONUSCO, the African Union, the European Union, the countries of the Economic Community of Central African States (CEAC), the countries of the Great Lakes region of Africa. the East African Community (EAC) and the current Congolese government of committing such crimes against Congolese civilian populations.

We condemn the international, regional, national and local impunity in response to crimes that Congolese women continue to be subjected to along with all sorts of discrimination and violence since 1996, which marked the invasion by foreign forces of DRC.

We call for an end to the occupation of the DRC by foreign forces and the demilitarization and non-legitimization of violence as a means of gaining power in state institutions and the governance of the country.

We call for an end to the occupation of the DRC by foreign forces.

We demand that justice be served to restore the peace and dignity of the Congolese people and ensure the reconciliation of peoples in the Great Lakes Region.

We are calling on permanent members of the UNSC, particularly Britain and the Congolese government, to fulfill the following commitments they have made: 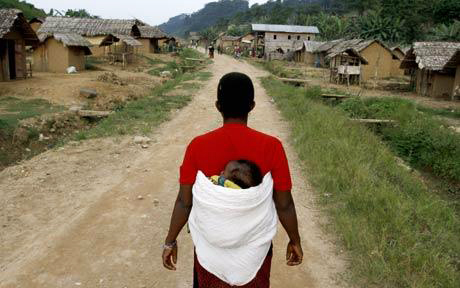 We invoke UNSC Resolution 1756 (2007) on the situation in DRC, which established a link between armed conflicts, exploitation of natural resources, multinational companies and rape and sexual violence against women and girls used as a weapon of strategic warfare by armed groups.

We cite UNSC Resolution 1794 (2007), which stresses that the protection of civilians must be given priority when deciding on the use and capabilities of available resources and states that the U.N. Security Council Mission must use all necessary means to protect civilians under imminent threat of physical violence.

We evoke the 2008 report published by U.N. experts showing the involvement of several Western companies and nationals in the financing of the conflicts in eastern DRC and in particular the rebel movements. UNSC Resolution 1857 extended the financial and travel measures provided for in Resolution 1807 (2008) to “individuals or entities supporting the illegal armed groups in the eastern part of the DR Congo through illicit trade of natural resources.” UNSC Resolution 1896 renewed these sanctions.

We invoke U.N. Resolution 1756 (2007), which established a link between armed conflicts, exploitation of natural resources, multinational companies and rape and sexual violence against women and girls used as a weapon of strategic warfare by armed groups.

We mention the new leaked U.N. report, “Mapping Exercise,” by the United Nations High Commissioner for Human Rights, in accord with Resolution 1794 (2007), concerning serious violations of human rights and international humanitarian law committed between March 1993 and June 2003 on Congolese territory.

We demand the implementation of Article 5 of the Rome Statute under the jurisdiction of the court over crimes committed in the DRC, facing what is defined in Articles 6, 7 and 8:

1) Article 6: On the definition of crimes of genocide, including points (b) on bodily or mental harm, (c) on inflicting destructive life conditions and (d) on imposing measure to prevent births

2) Article 7: On the definition of crimes against humanity, including points (g) on sexual violence, (h) on persecution and (d) on forced displacement

3) Article 8: On the definition of war crimes

It is time for reason, morality and human dignity to prevail over profit and injustice in the Great Lakes Region of Africa. The blood of innocent victims is flowing and will only stop with justice and the restoration of peace.

The U.K. government is currently one of the largest donors of funding assistance to the DRC and is a permanent member of the U.N. Security Council.

As residents and members of British society, we call on the British government, a member of the UNSC, to demonstrate the political will to end armed conflicts in the Great Lakes region of Africa and the consequent violence against civilians, particularly sexual violence. We ask this government to commit to enforcing the OECD guidelines that are violated by multinational companies based in Great Britain, quoted in the U.N. experts’ report on the exploitation of Congolese natural resources and listed on the London Stock Exchange.

We demand justice and reparations for Congolese women as well as other civilians in the DRC and the Great Lakes region of Africa. We encourage the British government to double efforts through the support of institution building that ensure the sovereignty of the rule of law, social transformation and human development in DRC.