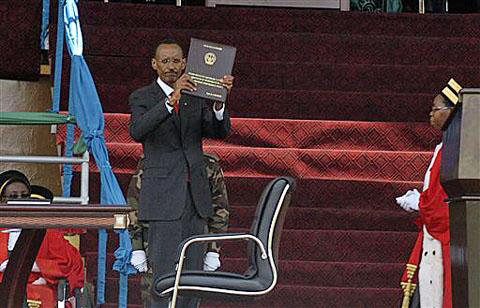 Rwandan President Paul Kagame was sworn in to serve another seven-year term on Sept. 6, 2010, 11 days after the explosive Aug. 26 leak of a U.N. report documenting genocide committed by his army in the Democratic Republic of Congo.

Official publication of the report of the United Nations High Commissioner for Human Rights (OHCHR), leaked to Le Monde on Aug. 26, has been postponed until Oct. 1, 2010, to give those countries accused, most notably Rwanda and Uganda, time to prepare responses. Its OHCHR investigators mapped and collected evidence of “the most serious violations of human rights and international humanitarian law committed within the territory of the Democratic Republic of Congo between March 1993 and June 2003,” including massacres of Rwandan Hutu refugees and Congolese Hutus, hunted down from Congo’s far eastern to far western borders, in what some call “the Congo Genocide.” 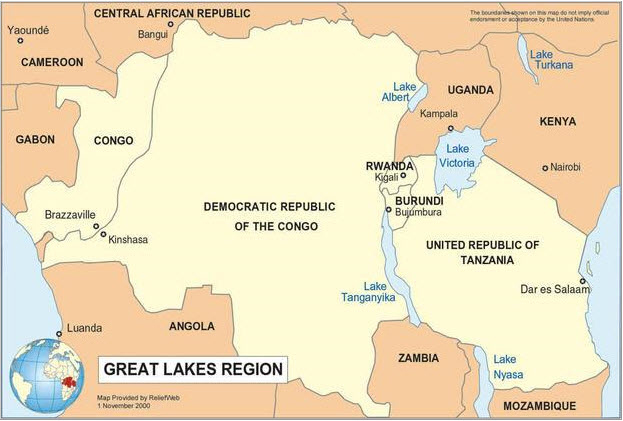 Kagame, a general who took special training at Fort Leavenworth, Kansas, in the United States, has long been credited with ending the horrific violence known as the Rwanda Genocide, against both Rwandan Tutsis and Hutus in 1994, but his actual role then, and in the years before and after, is so fiercely disputed that French and Spanish courts and a civil lawsuit filed in Oklahoma City all accuse him and his top officers of ordering the political assassinations triggering the Rwanda Genocide and with war crimes, crimes against humanity and genocide.

During the third week of July in Spain, protestors objected to Kagame’s visit to attend a U.N. conference by taking to the streets with their hands, faces and clothes drenched in red paint to simulate blood, chanting “Kagame Killer!” and holding up signs reading “Paul Kagame = Genocidio en Africa.” In response to complaints from human rights campaigners, Spanish Prime Minister Jose Luis Rodriguez Zapatero finally withdrew from a U.N.-backed meeting with Kagame.

American evangelical pastor Rev. Rick Warren, another member of Kagame’s Presidential Advisory Council and one of his closest allies, not only attended but also delivered the invocation at the Kagame inauguration, as he had at Barack Obama’s inauguration on Jan. 20, 2009. 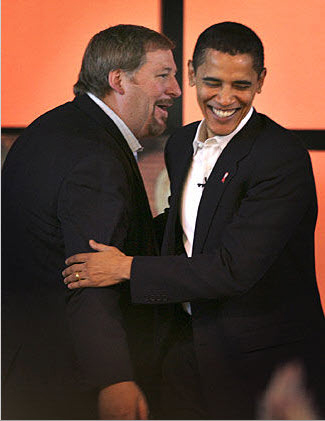 Warren made Rwanda his first “purpose-driven nation” in 2005, after a 40-days and 40-nights campaign recalling the 40 days and 40 nights of rain in the Old Testament, when, according to the Book of Genesis, God wanted to cleanse the earth. Rwandans were urged to read Rick Warren’s book, “The Purpose Driven Life,” in school, at work, at home, and in church.

Warren has not made a statement about the leaked OHCHR report documenting genocide by Kagame’s army in D.R. Congo or the upcoming official release of the report on Oct. 1.

Barack Obama, whom Rev. Rick Warren endorsed during his 2008 presidential campaign, has not yet responded to the leaked report either, but many Rwandese and Congolese, including exiles, refugees and genocide survivors in Canada, Europe and the U.S., are closely watching signs as to how he will. A U.S. coalition of NGOs including Friends of the Congo, Africa Faith and Justice Network, the Chicago Coalition for Congo, Foundation for Freedom and Democracy in Rwanda, and Mobilization for Peace and Justice in Congo argue that the report should signal the end of the special relationship between the U.S. and the Kagame regime, in which Kagame has often been misrepresented and even extolled as a great leader.