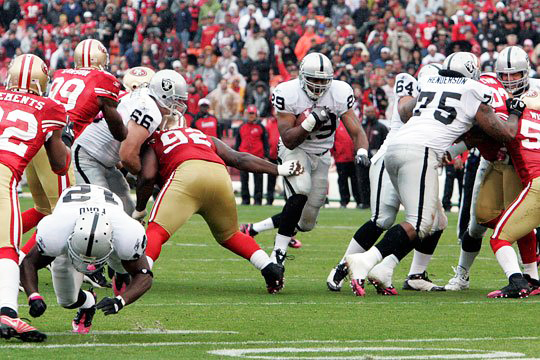 Candlestick Park was home to the “Battle of the Bay” football game this past weekend, which featured the 0-5 San Francisco 49ers against the 2-3 Oakland Raiders. Both teams have seen better days in the past, but this year’s battle was one of mediocrity. Nevertheless, the game saw impassioned fans from all over Northern California descend on the Bayview neighborhood to see who could win a game of futility.

The score was17-9, finally giving the 49ers a win this season, but it would take them the entire game to put it away. The game started out with the Raiders dominating early. The Raiders got the ball on offense and moved up the field on a 49er pass interference call on a Jason Campbell pass to Louis Murphy. The Raiders stalled on offensive and they had to resort to a score on a Sebastian Janikowski field goal making it 3-0.

The 49ers looked ineffective early, with Alex Smith struggling to pass the ball. The Raiders drove the ball again after an end of round hand off and run by Murphy for 43 yards. Then the Raiders stalled again and Janikowski kicked a 24-yard field goal to make it 6-0.

The 49ers got on the board late in the second quarter. A Smith pass to Westbrook went for 19 yards to the 49er 40. After a few incomplete passes, Smith connected with Josh Morgan for 35 yards to the Raider 13 yard line. The 49ers then stalled and Joe Nedney made a 25-yard field goal to make it 6-3 Raiders at halftime.

In the second half, the Raiders offense stalled with Campbell running the team. He completed eight of 21 passes for 83 yards. It seemed as if the Raiders didn’t have an effective game plan.

“We didn’t execute on offense and we never found our rhythm,” said Raider tight end Zach Miller. “There were opportunities, but we didn’t take advantage of them.”

While Campbell struggled quarterbacking the Raiders, the 49er offense began to move. The 49ers took a 10-6 lead after Smith connected with Michael Crabtree for a spectacular 32-yard touchdown, in which he caught the ball with one hand.

“I saw the ball in the air and I jumped,” said Crabtree. “All I thought about was making sure I caught it.”

The Raiders would move the ball down the field after the 49er touchdown to make the game 10-9 after another Janikowski field goal. After this, though, the 49ers would blow the game open after a Frank Gore 64-yard run in the fourth quarter. The 49ers then scored on a Smith 17-yard pass to Vernon Davis to make the score 17-9.

The Raiders got the ball back, Campbell threw it to rookie receiver Jacoby Ford at the Raider 25-yard line, but it bounced out of his hands and was intercepted by 49er linebacker Takeo Spikes, ending the game and giving the 49ers a win. After the game, there were two different explanations from the head coaches, telling two different stories about what happened on the field.

“I’m very disappointed. Too many opportunities to win a game and we didn’t get it done,” said Raider head coach Tom Cable. “We had a ton of opportunity offensively to score. But we did not score.”

Mike Singletary, 49er coach, said that the 49ers were ready and had a specific formula for how they won the game.

“Well, number one, we didn’t turn the ball over,” said Singletary. “We won the turnover battle. Number two, we played good football on the defensive side and didn’t allow big plays. So that was big, and I think we were able to run the ball when we had to, and that was a good thing. And of course Alex (Smith) made a big-time play that really made the difference. And so I think all of those things add up to a win.”