The resurrection of an artist such as Fela Anikulapo Kuti, whose art and legacy define the words “larger than life,” is a pretty lofty goal for an art show. When it came time to show and prove, though, the opening of “Zombie: The Resurrection of Fela Kuti” on Oct. 7 at the African American Art and Culture Complex (AAACC) went far beyond expectations.

The resurrection of Fela’s spirit was realized cleverly through the collective embrace of the courage and beauty his life and art stand for. It was a spontaneous invocation of the spirit of an ancestor, in which everyone in attendance responded to a call with joy, to let Fela borrow their voices to tell his story once again.

“I believe it is a story that must be told, and he is a man whose unapologetic quest for justice should, in some ways, be duplicated, and never forgotten,” said Melorra J. Green, visual arts coordinator for the AAACC and co-curator of the exhibition.

It is difficult to describe Fela Anikulapo Kuti in few words. His story is the definition of legendary and so much larger than life it is almost hard to believe. He was born in Nigeria, studied medicine in Europe, learned about Black power in America, and went home on a mission to uproot corruption, redefine his music and find the true Africa.

He was a saxophonist but played many instruments well. He wrote, composed and sang lead on his more than 60 albums. He started his own communal living space, Kalakuta Republic, in the slums he grew up in, complete with a recording studio and free clinic. Then he established his legendary club and spiritual center, The Shrine, down the street. He married his 27 backup singers in accordance with African tradition when the army burnt down their home and studio, leaving them homeless and destitute.

The political content of his music so provoked the various Nigerian regimes that ruled during his lifetime that he was regularly arrested on false charges, beaten, his home was raided, burnt to the ground, and his mother was thrown from a window to her death. No matter how horrific the oppression, however, Fela’s spirit endured. His music became more vivid through his pain, and his stories became oral tradition through his painstaking storytelling and call and response lyrics.

“I’m stronger from the beatings,” he remarks, smiling at his interviewer, showing the camera his scars from police beatings, in the documentary “Music as a Weapon.” “I’m getting stronger, and I’m much stronger than I was before.”

To truly revive the spirit of Fela so that he could perform decades after his untimely passing, co-curators Melorra Green and Malik Seneferu put out an open call more than a year ago for artists to contribute their creative voices to the exhibition. Thirty-two artists answered the call and filled every inch of the third floor, the atrium, the expansive hall of culture, and the long and narrow hall space adjacent with works of art that invoke the power of Kuti.

The show consisted of paintings, sculptures, installations, altars, murals, two large screens showing Fela’s performances and interviews, a DJ spinning an endless stream of Fela anthems, accompanied by a drum kit and four congas playing all night long to a dance floor packed with revelers. It was of course entirely fitting for a performance directed by big band leader Fela to be a collaboration of so many voices rising in one well-orchestrated experience. 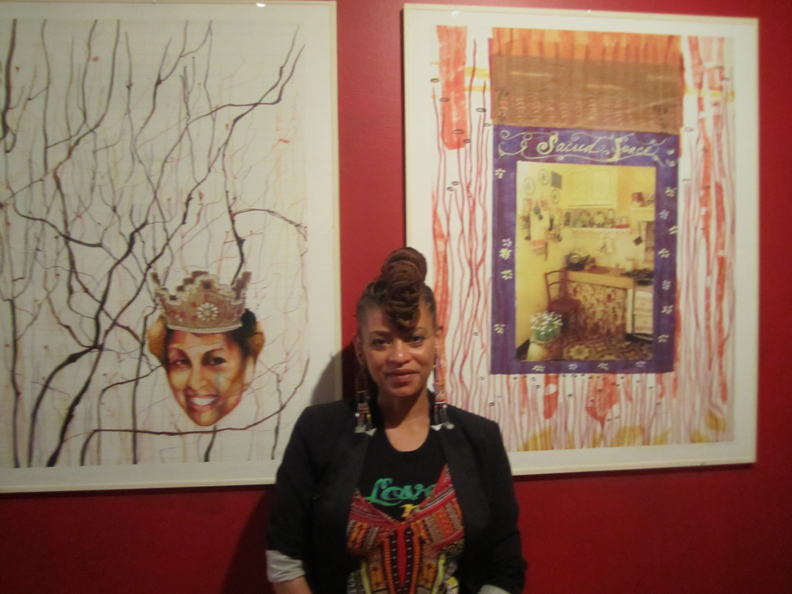 “My approach,” said contributing artist and co-curator Malik Seneferu, “was to portray Fela in a manner rarely seen for the soul purpose of fulfilling the fact that his spirit was resurrected on the night of Oct. 7, 2010.”

Having a relationship with the AAACC that spans more than 20 years, Malik’s influence and work helped set the pace for the night. One of many works of art he unveiled for the show depicts Fela in lotus position, balanced peacefully on the top of a small gold cage, meditating beneath a halo of energy, dressed in and surrounded by the coolest of blue tones.

Artist Sabrina Nelson traveled all the way from Detroit, where she is an art educator at the Detroit Museum of Art, to show and to experience the resurrection

Living directly behind the largest museum of African American history, the Charles H. Wright Museum, she said she had “just thought we were the only ones doing things on this scale. I was wrong. The AAACC exceeded my expectations.”

“The Fela exhibition was as exciting as going to see (‘Fela,’) the Broadway play. I just saw it a few weeks ago, and this was like walking through the stage play. Not watching it, I was in it this time – so the resurrection was really felt,” said Nelson.

The Detroit artist brought two framed mixed media pieces that honored the sacred feminine in Fela’s life in the form of one of his queens in particular. “I thought it would be a great idea to give presence to Remi Kuti, the first queen in Fela’s life and mother of his children.”

“The resurrection was all the way live,” declared local contributing artist Darryl Thompson.

He referred to the opening as “what I call a performance of Fela Kuti. I felt alive with the show as I viewed every piece of art and chatted with the viewers and artists and danced with live drums and DJ.”

Thompson offered two oil painting that vibrantly juxtaposed images of Fela as a performer with portraits of Fela as a spirit, as an influence and as the undead, with explosive yet simple contrasting heavy color schemes.

Perhaps the show’s most prolific contribution came from Black Diamond Shining, the Oakland-based “fine street art” collective. BDS artists Ras Terms, Deadeyes, AshRose and safetyfirst© painted collaboratively on canvas, composed an elaborate installation/altar in the left rear corner of the gallery, painted murals on two walls and even got up on the entryway, tagging below the words Hall of Culture the rhyming couplet “Fall of Vultures.”

Ras Terms of BDS explained that their offering started humbly with a single painting. “It started out as just me, and then safety© came in and we did a painting collaboratively. When we came to hang it, we asked, ‘Can we paint on the wall,’ and they let us go ahead.” 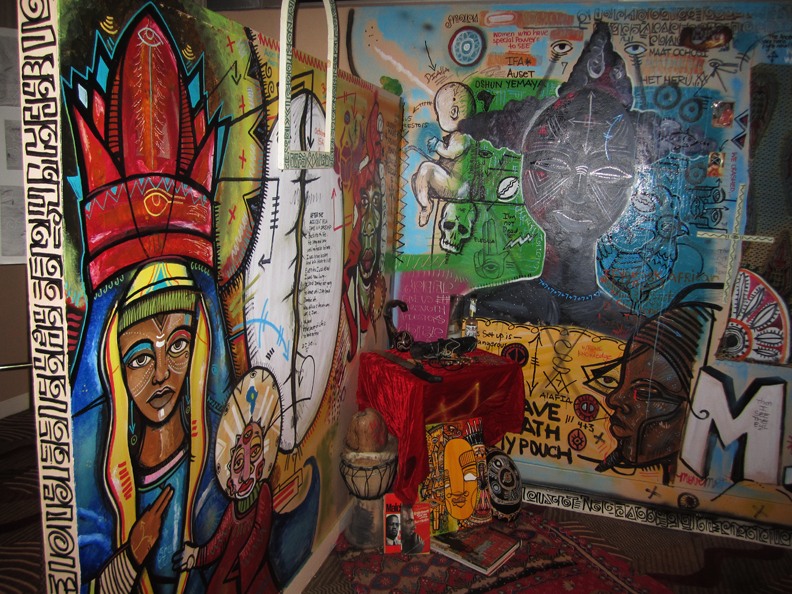 From there, BDS crew got Melorra’s consent to compile an installation/altar in the corner to attract the spirits of the ancestors. “Traditionally, in the corner is where you do your altars. Spirits dwell sometimes in the corner; they are attracted to them. It was Fela’s spirit that wanted us to create more and more in there. I did it for the ancestors that worked through Fela,” explained Terms.

“Black Diamond Shining is a collective of visual healers and creators who refuse to be pigeonholed in Eurocentric thinking or acknowledge their written history. We shall create our own history, thank you,” said BDS painter safetyfirst© .

Photographer and performer Tumani Onabiyi was able to bring something of the physical essence of Fela in the form of a black and white close-up taken at Fela’s home.

“I was in Lagos, Nigeria, West Africa, for Festac 77, the second World Festival of African Arts and Culture, as a part of the African American delegation from the Bay Area. Fela lived in a part of town called Kalakuta. That is where his house was, and The Shrine, his club, was one block down the street,” the photographer said, recalling his visit to the republic of the first Black president.

He added, “The act of resurrecting Fela in San Francisco is by nature a political act.”

Celebrating Africa in the city of San Francisco, whose racist zoning laws and “urban renewal” programs have been a blight on its Black residents, brought out Fela’s art as protest message through the artists, both in their art and vocally.

“I think any display of African culture by people of African culture in San Francisco is significant, due to the powers that be doing so much to erase all African presence in the city,” said safetyfirst© , a New York native and 10-year Bay Area resident.

“Being a native of San Francisco and witnessing the gentrification of Black people throughout the city has been hard to bear,” Malik Seneferu said. “I feel that to bring forth events brings us together in the manner of creative consciousness.”

“Fela said music is a weapon,” Melorra Green added. “I believe that. My goals are to, No. 1, push art and activism and, No. 2, educate our community about other freedom fighters than the same ones we hear about every February.” 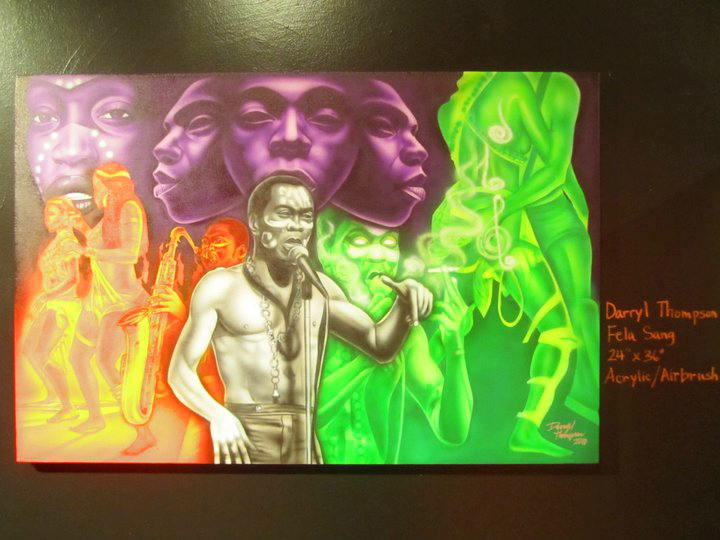 “For me, it is about creating a piece that acknowledges the exploitation (of African people) and shows how to return to the essence of the self to heal, which Kuti, as a traditional medicine man, was concerned with in his life,” said Karen Seneferu, a contributing artist at the resurrection.

Seneferu refers to her sculpture, “Son, Heal Your Self,” as “a womb piece. I literally had to stick my hand inside the middle of the piece to create an interior universe as well.”

The piece itself was one of the most supernatural expressions of the night: a lamp the height of a full grown man and the shape of a slender yam, with elaborate white designs painted on, and at the top the head of a doll. Around the base were bell jars, symbolizing specimen jars, each containing the picture of a child soldier. Also inside the jars are lizards, bird’s eggs, cowries and other elements utilized in African healing rituals.

A light shines within and, through a square hole situated halfway down, just big enough to look through with one eye, up close you can see “the inner universe (of the sculpture), the inside of the belly of the piece has the same images of boys, except with gold around the heads of the boys, and copper and gold flakes surrounding the images. Here and there, you see black paint splashed on their faces, symbolic of oil.

“These children are at the center of the mineral wealth that is being ignored or exploited. I have them inside lit with a light to remind us of our true wealth; it is rooted in the healing of the children. I also show that the reclaiming process, or the need to reclaim one’s beauty, voice, identity, is not always beautiful,” said Karen.

“Zombie: The Resurrection of Fela Kuti” will be showing until January 2011. You can stop by the African American Art and Culture Complex Tuesday through Saturday, 12 p.m. – 5 p.m., to check it out. Fela Kuti documentaries are also on sale there for a limited time.

Larry Dobie was raised in Norwalk, Connecticut, where he studied journalism at Norwalk Community College and Southern Connecticut State University before moving to the Bay Area to pursue a career in youth development. He is chairman of the board of Expanding Young Minds, a Stockton-based youth non-profit. He can be reached at LarryDobieS@gmail.com.