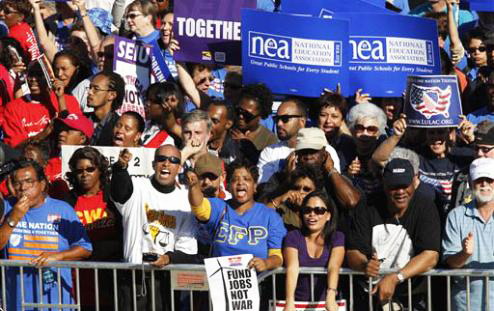 “This system treats us like throw-away people,” says Carolyn Brown, a Seattle volunteer with prison reform group Justice Works! An African American with a record, her effort to find a job is deeply frustrating. Why? Because she and tens of thousands of others are up against systemic racism.

Black unemployment nationally is almost double the rate for whites. Racial disparity among prisoners is even more extreme. Combined, they are a toxic mix decimating communities of color and widening the racial divide.

Many grassroots organizations around the country are mobilizing against such savage injury, as are national civil rights and labor organizations. To have the most impact, organizers will need to consolidate their offensives and politically pinpoint the cause — the profit system.

Joblessness for whites is bad enough at an official rate of 8.6 percent. For Blacks, however, the unemployment rate is 15.6 percent. For youth it’s worse. White teens face more than 23 percent unemployment. Black youth confront over 40 percent.

Bigots claim that Blacks are “less qualified” for the job market. In fact, discriminatory unemployment rates among Black workers apply at all education levels. More African Americans with college degrees are unemployed than whites with just a high school education.

Massive Black imprisonment compounds the joblessness. This country is the biggest jailer on earth. The U.S. locks up one quarter of the globe’s prisoners. Over 60 percent of these inmates are racial and ethnic minorities. Blacks, who represent just 13 percent of the U.S. population, are 40 percent of its prisoners.

Federal and state laws barring ex-felons from many social services make it extremely hard for them to get jobs, housing, food stamps or aid for education, once they are out. As Justice Works! organizer Lea Zengage says, “People who go to prison are set up to fail.”

Today, the increase in women being jailed is almost twice the rate for men. Fifty-four percent are women of color; 32 percent are Black. Two thirds of those in state prisons have underage children — catastrophic for their families.

Mass incarceration of African Americans began with the so-called “War on Drugs” contrived by Presidents Nixon and Reagan in the ‘70s and ‘80s. It was designed to sabotage the Black civil rights movement. In the words of presidential aide H.R. Haldeman, Nixon believed “the whole problem is really the Blacks. The key is to devise a system that recognizes this while not appearing to.” The drug war became that system. Although illicit drug use is nearly equal for all races, most arrests are in poor communities of color. Most convictions are for simple possession, often of marijuana.

Though most Americans think pot should be decriminalized, racist “tough on crime” policies have been dumped on society by politicians of both parties. Mandatory minimum sentencing forces innocent people to plead guilty to lesser charges rather than face decades in prison. Three-strikes laws put many people in jail for life for minor, non-violent offenses. Differential sentencing laws make penalties much harsher for crack cocaine in Black communities than for powder cocaine in affluent white neighborhoods.

“Fast 4 Freedom” actions were held around California in August against a massive prison expansion plan. In Washington state, Justice Works! spearheads a campaign against the state’s three strikes law. Mississippi Justice focuses on public education. Families Against Mandatory Minimums, Drug Policy Alliance, and the Sentencing Project are active national groups. Mobilizing against police brutality rises up across the country, as do committees to defend prisoners such as Troy Davis in Georgia, four Black lesbians in New Jersey and the Scott sisters in Mississippi.

Nationally known mobilizations are battling unemployment and discrimination. On Aug. 28, Jesse Jackson’s Rainbow PUSH Coalition and United Auto Workers Union held a rally of 5,000 in Detroit to kick off a campaign for “Jobs, Justice and Peace.” The NAACP and Service Employees Local 1199 held a March on Washington, D.C., Oct. 2, demanding jobs, education and economic reforms. It was endorsed by the entire labor movement and many community organizations. The Freedom Socialist Party organized a Harlem contingent.

This quickened motion could launch a new civil rights movement. But organizing around these integrally linked issues is too often segregated. Mainstream national coalitions must confront the racist justice system and vigorously support prison reform organizing. Every social justice movement must openly acknowledge that racism is necessary to the capitalist system. New York Radical Women’s meeting titled “Time to Fire Up an Anti-Capitalist Movement for Civil Rights, All Out for the Oct. 2 March on Washington for Jobs, Justice and Peace!” is a good example.

In the U.S., Black leadership is decisive for radical change. Without solidarity and political clarity around racism against Black America, revolution in the USA can only be a pipe dream.

What’s to be done?

At a minimum, stand up for:

Megan Cornish is a writer and member of Radical Women and the Freedom Socialist Party. This story first appeared on www.socialism.com.