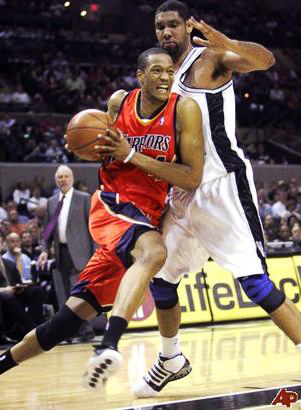 The Golden State Warriors sports franchise has undergone a new change in ownership. New owners Joe Lacob and Peter Guber were introduced to the fans recently in an outing against the Detroit Pistons.

The owners took over the sports franchise from Chris Cohan, the team owner for the past 16 years. While the new owners have only seen one win in the two weeks they have owned the team – the Warriors have lost to the New York Knicks, Los Angeles Lakers and recently the Denver Nuggets – the ownership change signals a more positive direction for the franchise.

During the Cohan era, winning was uncommon. A former cable company founder, Cohan was successful at helping to rebuild the Coliseum (Oracle) Arena into a world-class basketball facility. But as owner, he saw only two winning seasons in 16 years. The team made it to the playoffs once, in the 2006-2007 season.

When the new owners were announced to the fans at the Piston game, the fans were quick to embrace the new owners, giving them a standing ovation. Lacob, a venture capitalist from Silicon Valley, was part owner of the Boston Celtics before becoming the Warriors owner. Guber is the founder of Mandalay Entertainment, a television, sports, entertainment and new media company that has produced various films, including “Rain Man,” “Batman” and “The Color Purple.”

The other two partners in the Warriors’ ownership group include Vivek Ranadive, a Silicon Valley technology innovator, who will be the first Indian American to own a major sports franchise, and Erika Glazer, a real estate tycoon. In total, the ownership group paid Cohan $450 million for the franchise.

The warm reception that greeted the new owners was a sharp contrast to how fans usually greeted Cohan. During the 2000 All Star game, held in Oakland, when Cohan was introduced, he was booed heavily, while NBA Commissioner David Stern looked on in embarrassment. In an informal poll by the magazine Sports Illustrated, Cohan was voted the fourth worst owner in basketball, as the magazine cited perennial poor performance by the team

The new owners knew the team was under-performing in spite of the win-hungry fans, who came to Warriors games religiously to cheer their team on. In a token of appreciation, the concession stands were selling food half off the first night the new owners took over. Lines of fans stood waiting to cash in on the deal. At the end of the first quarter when Lacob and Guber were introduced to the sold out arena, fans cheered with enthusiasm.

“My favorite colors are blue and yellow, and my letter in the alphabet is W,” said Guber. Alluded to the lack of wins during the Cohan era, he added, “We need to get of lot of Ws – Go Warriors!”

After starting off the season at 6-2, the Warriors have settled in at 7-7 or 500 for the year. With a young nucleus of Stephen Curry, Monta Ellis, Dorrel Wright, David Lee and Andris Biedrins and even younger talent in Ekpe Udoh and Reggie Williams, coached by first-year coach Keith Smart, the team seems to be moving on the right path.

It will be a few years before this team will be able to compete with the Lakers for a league championship, but it’s a team with a core that can grow together and give the fans hope – something that didn’t seem to always be there for Warrior fans.