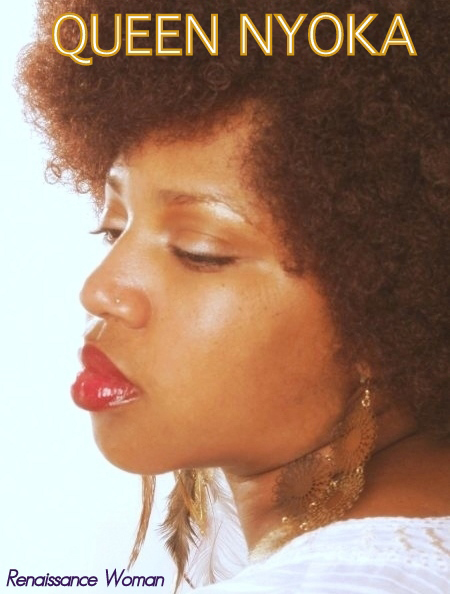 Queen Nyoka is an up and coming reggae artist out of the Bay who makes her words count when it comes to chanting down Babylon. In the aftermath of Mehserle getting two years for killing Oscar Grant, political music from a reggae queen is what is needed to summon the feminine warrior energy in the chest of the sista souljahs and the children. The music of Queen Nyoka is definitely a breath of fresh air in an industry that pushes polluted sonic messages. Check out this Frisco native on her musical throne …

M.O.I. JR: How did you get into reggae? When did you know that you wanted to record music?

Nyoka: Well, I listened to a lot of reggae growing up because I felt like reggae always had a message. I knew I wanted to record music.

Honestly, taking it way back, it was motivated by an emotional response when I was very young. Well, it started in preschool. I was the “pee pee girl” and no one wanted to play with me. So I used to walk around singing to myself and making up songs.

I continued writing on and off throughout the years, had my first real studio experience during high school and was even featured on a few other local artists’ records.

M.O.I. JR: What motivates your music?

Nyoka: My music is motivated by the “average Joe,” the hard workers, the revolutionary, the single parents, current events and generally what’s going on in my life and my community. The messages in my songs feel true and compelling.

M.O.I. JR: Have you ever released something before? When are you planning to release something new?

Nyoka: Yes, I have actually worked on several different projects, but this is the first solo project I have ever completed. I am constantly writing every day. If I had it my way I would write one or two songs per day.

Since writing and producing are some of my favorite things to do. The album should be dropping by late November 2010 or early December at the latest. We are finishing up mastering this current album, and I’m working on several other new songs to be released shortly after this, possibly a mini EP.

There is a new song in particular that I am very excited about which was written about the tragic oil spills – such as the recent BP spill in the Gulf.

M.O.I. JR: How long have you been working on this project?

Nyoka: I have been working on this album for approximately one year.

M.O.I. JR: Who are some of your musical inspirations?

Nyoka: As far as my inspirations in music goes, we could be here for a minute (laughing), but here are a couple: Billie Holiday, Curtis Mayfield, Fela Kuti, Sizzla Kolangi, Donny Hathaway and I can’t forget about Lauryn Hill and Erykah Badu.

M.O.I. JR: How do you want the listeners to feel about your music?

Nyoka: I want my listeners to be inspired to fight for what’s right, good causes, and to feel the energy and passion in my lyrics and musical arrangements. A lot of commercial music takes your mind off the real issues happening in the world.

My music focuses on awareness of police terrorism, love and unity, current events and real people. Not at all a fake facade made up to just impress the listeners in the wrong way. I want my audience to get with this movement, enjoy the experience, and I want them to stand up and fight for a cause. We have many of them!

M.O.I. JR: How could people stay up with you online?

Nyoka: I can be found on many of the popular social networking sites and some specific music network sites. I have a Facebook Fan Page called Queen Nyoka. I have a MySpace music page. I have been recently climbing the local charts on ReverbNation, where you can listen to some of my demo recordings, email me and join my fan club and look out for upcoming new music.

I am also on last.fm and several blogs and independent music feature sites, which can be found by searching Queen Nyoka on Google. My music will soon be distributed on many of the digital music stores such as iTunes, Napster, Amazon. I can also be found on my indie label’s website: Sonic Chimera Recordings.

You can inquire about reviews, doing shows and also email me through my management at Def Pacific based in the Bay Area.

Here are some of those links: