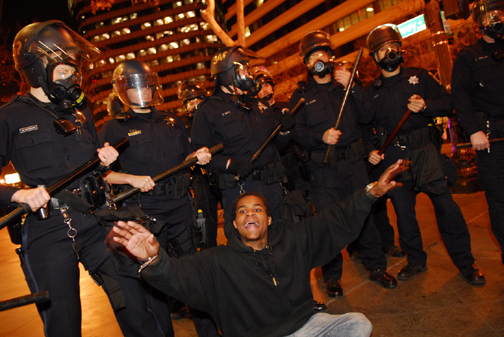 As the sentencing for convicted Bay Area Rapid Transit police officer Johannes Mehserle draws closer, Oakland waits impatiently. While many people are hoping he will receive the maximum sentence of 14 years on Nov. 5, there lies a definite possibility he will get a lesser sentence and perhaps walk with time served and probation.

The rebellions of January 2009 that brought about Mehserle’s arrest could very well be set off once more, regardless of the sentence, admidst widespread community sentiment that justice has not been served. As we move closer to the fifth, the very real possibility of further rebellion hangs in the air.

This case, and the movement that has grown around it, is a window into today’s Oakland, replete with stark contradictions of race and class, the dialectic of state violence and popular resistance, as well as contests over power and voice in the public sphere. However, listening to various official voices, these issues have been set aside, whether by the media or by the non-profit sector. What was transmitted in July, in the lead-up to the verdict and what will be harped on as we draw closer to Nov. 5, is the mantra of “outside agitators.”

In the lead-up to the verdict on July 8, 2010, a discourse was whipped up by the police and city officials and parroted non-stop by the media and non-profits who carry their water – that of “outside agitators.” The story went that crews of white anarchists from outside the city were going to dupe Oakland residents into violence and that any violence that came out of the verdict would be white-led.

This “outside agitators” frame may sound familiar to you. It has its origins in the Jim Crow South. Back then, the white power structure referred to civil rights organizers as outside agitators coming to the South to disturb the supposed “peace.” Leave it to the city and the non-profits to be brazen enough to harken obvious parallels with their white supremacist predecessors.

Aside from the lineage of the phrase is the condescending nature of the argument. Implying that people of color can’t lead themselves or that forays into the territory of reciprocal violence are somehow the invention of the white man is not an aberration for politicians or these non-profits who patronize the people of Oakland daily.

The whole structure of the city, which this coalition of politicians, police, media and non-profits seeks to maintain, tells ordinary Oaklanders, in myriad ways, that they cannot and should not have a say in what happens in their communities or to their kids. The broken windows and the looted stores smashed the illusion that Oakland wasn’t enraged, the burning dumpsters and the blankets of graffiti resounded the fact that Oaklanders will have their say, not just in the case of Oscar Grant, but in building a different social order where mass incarceration and police executions are a thing of the past.

The outside agitators idea is also premised on the idea that there is one unified Oakland, an Oakland that is just going to ignore one of the gravest discrete injustices in recent history at that. As with any city, there are two Oaklands: one of the upper-middle class and one of the working class and lumpen.

Oaklanders will have their say, not just in the case of Oscar Grant, but in building a different social order where mass incarceration and police executions are a thing of the past.

The politicians, media and non-profits would have us believe Oaklanders all share the same interests and values. The same people gentrifying North Oakland and Fruitvale, using overtly racist gang injunctions to hasten the process, are some of the loudest out there hollering about “our Oakland” and “outside agitators.”

Oakland is, as Malcolm X used to say, a racial powder keg. A city with such stark inequality and social exclusion as Oakland is far from unified. The above-mentioned coalition is hell bent on dampening that powder keg, on trying to gloss over the very deep contradictions of race and class that define life in this city.

Aside from the origins of the term, and beyond the patronizing middle-class con artistry of those who echo it, is the obvious attempt to erase the history of Oakland and the various histories of Black and Brown struggle in this city. Everyone knows there is a living history of struggle against racial oppression that has taken place in Oakland.

The unfulfilled vision of the Black Panther Party exists in the minds of tens of thousands of Oaklanders. You need to look no further than to former Panthers active in the Justice for Oscar Grant movement and to the younger people versed in their history and politics to see the true lineage of Oakland, apart from the picture the currently powerful like to paint. Militance and opposition to police violence are not being imported into Oakland; they are embedded in its culture and politics and can be traced back generations.

The fact that most police live in the suburbs and most protesters, including a large cross-section of anarchists, live in Oakland is another point not lost on those in the movement. I suggest a peoples’ poll to identify who the real outside agitators are. On the one hand, we have anarchists who are for racial and economic justice for the people of Oakland – and are willing to fight for it – and on the other we have police and the politicians along with the corporate press and the non-profits that do their PR work who do their best to maintain the existing order.

Militance and opposition to police violence are not being imported into Oakland; they are embedded in its culture and politics and can be traced back generations.

Furthermore, the Oscar Grant case and the issue of police violence is bigger than Oakland. Oscar didn’t live in Oakland and police violence is everywhere. The BART stretches all over the Bay Area. There isn’t a zip code limit on protesting against an injustice.

All of the facets of this discourse serve to stifle dissent and attempt to divide people of color from white anti-racists. By parroting this discourse some non-profits are seeking to white-wash Oakland’s vibrant history of resistance.

The currently powerful and members of the non-profit sector who seek to take their place are attempting to draw stark lines and race-bait the white anti-racists in the movement while treating people of color in Oakland like children. The non-profits, many of whom have been working in conjunction with the Oakland police over the past two years and the official media will read off of their police cue cards one more time in the next two weeks and tell the people that resistance is for whiteboys and that justice has been served.

I believe that clear lines are being drawn, but not ones based on the values or ideas of those who recycle white-supremacist tropes of the Jim Crow era. Those who seek to stifle dissent with false moralism and convenient notions of unity are apologists for police murder at the end of the day.

The same ruling class of Oakland that robs the working people of the city and siphons millions from education to pay an occupying army a six-figure income wants to start a polarizing debate? Bring it.

Who makes those budget decisions that just write off generation after generation of poor youth of color? Who hassles and locks up people every day and murders innocent kids on a regular basis before driving their SUV back to some big suburban house?

Who has been running long tear jerking stories about the poor, unfortunate Johannes Mehserle? Whose solution to the problem of police violence revolves around electing “better politicians” like themselves?

The people of Oakland are smarter than these politicians, police officials, media outlets and aspiring politicians from the non-profit sector have imagined them to be, and when they get organized they are a lot more powerful than these apologists for police violence have ever given them credit for. The process of weeding the real “outside agitators” out of Oakland is long overdue. And it has just begun.

Berkeley writer Mike King, a Ph.D. candidate in the Department of Sociology at the University California, Santa Cruz, can be reached at mking@ucsc.edu.