by the Free Mumia Abu-Jamal Coalition 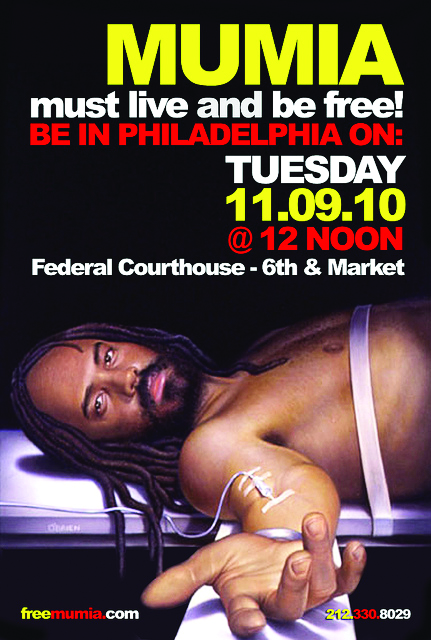 The only legal options to be considered at the Third Circuit’s Nov. 9 hearing are whether Mumia Abu-Jamal is to be executed or get life in prison without parole. Clearly neither of those two options is acceptable.

To fully grasp the significance of the hearing, one needs to revisit Federal District Court Judge William Yohn Jr.’s decision of Dec. 18, 2001. In that ruling, the judge upheld Mumia’s conviction but at the same time threw out his death sentence on the grounds that the verdict form used by the jury for sentencing at his trial violated the U.S. Supreme Court’s Mills precedent and therefore entitled Mumia to have his death sentence overturned.

At the time, Judge Yohn stayed his ruling on the death sentence while the state appealed his decision to the next higher level of federal court, the 3rd Circuit Court of Appeals. Mumia was therefore never removed from death row and remains there to this day.

At the same time, Mumia cross-appealed Judge Yohn’s decision upholding Mumia’s conviction. On March 27, 2008, the 3rd Circuit upheld Yohn’s decision on the death penalty on a 3-0 vote. Again the decision was stayed while the state appealed to the highest federal level, the Supreme Court. In the same decision, the 3rd Circuit rejected Mumia’s appeal on the conviction by 2-1 and, as before, Mumia cross-appealed that ruling.

On Jan. 10, 2010, the Supreme Court ordered the 3rd Circuit to reconsider its decision on the death sentence in light of its simultaneously-issued ruling unanimously rejecting an appeal from a white supremacist named Spisak. That man admitted to killing at least two people in Ohio and openly wished to have murdered more. He had appealed his death sentence also as a violation of Mills, but involving a different aspect of it than Mumia’s case.

The 6th Circuit, as did the 3rd Circuit in Mumia’s case, ruled that the death sentence should be vacated, but the Supreme Court ruled that the Mills precedent did not apply in Spisak’s case, and that therefore execution rather than life in prison was the appropriate penalty. Based on that decision, the Supreme Court immediately applied the same argument to Mumia’s case and asked for the 3rd Circuit to reconsider the issue of execution for Mumia as well.

Thus, the hearing on Nov. 9 is on Mumia’s penalty only. The choices before the court are either to sustain Yohn’s and its own earlier decisions or to reinstate the death penalty, clearing the way for Mumia’s possible quick execution.

If the 3rd Circuit reaffirms its earlier decision to sentence Mumia to life in prison without parole, the state will most likely appeal to the Supreme Court. This is exactly what happened with Spisak, after the 6th Circuit upheld its own earlier ruling which had overturned the man’s death sentence. But in the unlikely event that the state doesn’t appeal, it will then have 180 days to implement Judge Yohn’s decision.

Of course if the Third Circuit rules against Mumia, he will appeal to the Supreme Court. However, the odds for relief are small, given the increasingly reactionary nature of that court.

Thus, Mumia’s legal situation is extremely dangerous. His life truly is on the line, for no matter how the court rules, the only two choices under this legal system are either execution or life in prison without parole and, for the moment, the prosecution, with all its allies and backers, is fighting very hard for execution.

That’s why we are calling for all those who possibly can to come out to Philadelphia with us on the 9th. We will rally outside the Federal Courthouse at Sixth and Market, while the hearing is held inside. We must stay the hands of the executioners and pry open the prison gates for Mumia’s release.

If you’re in the Bay Area and can’t make it to Philly, come to the rally in Oakland at 14th and Broadway at noon on Tuesday, Nov. 9. Make enough noise for the judges to hear you.