New Orleans – Eight young people, who the Fire Department said were “trying to stay warm,” perished in a raging fire during the night of Dec. 28 in New Orleans. The young people were squatting in an abandoned wood framed tin walled warehouse in a Ninth Ward neighborhood bordering a large train yard. The young people apparently had a barrel with wood burning in it for heat. Officials said this was the city’s most deadly fire in 25 years.

The eight young people, estimated to be in their late teens and early 20s, remain unidentified. “We don’t know their IDs,” said the Fire Department. “They were so burned we cannot even tell their genders.”

Audrey, a young woman with brown dreads and a Polish last name, arrived at the scorched scene. She spent the night in the warehouse a couple of times. Because last night was so cold she and a few others begged money from people in the French Quarter and got enough to spend the night in a hotel.

Do you know who was in there? “Usually 10 to 15 people. Nobody uses last names, but Katy, Jeff, Sammy, Nicky, John and Mooncat usually stay there,” she sobbed. Why did people stay here? “A lot of freight hoppers stay here,” she said, pointing to the nearby trains. “We are just passing through, hopping trains. We don’t have any money.” Behind her a group of young people were crying and hugging as they picked up pieces of a navy blue sweatshirt from the burnt remains.

There are an estimated 1.6 to 2.8 million homeless youth in the U.S., people between the ages of 12 and 24, according to a June 2010 report by the Center for American Progress. Most are homeless because of abuse, neglect and family conflict. Gay and transgender youth are strikingly over-represented.

The fire happened in an area of abandoned warehouses at the end of Prieur Street, two blocks towards the train tracks down from the new Family Dollar on Claiborne. It is a modest neighborhood. Some people are back; some aren’t. One block from the warehouses is a long lime green shotgun house with a beautiful red rose bush in front. Next door stands a big gray double shotgun with a wide open door and tattered curtains hanging out broken windows. Untouched since Katrina, the gray house sports “OWNER HAS DOG” spray painted on the front and the date, “10.8.5.” “After Katrina, people don’t have the money to fix their houses up,” said the firefighter.

Across the street from the blackened warehouse is a vacant lot with a tiny handmade wooden shelter at its end. No electricity, no water. Inside are a mattress and some clothes. Follow the path through the weeds and there is another long vacant building that looks like it was once a school. Clearly people stay here as well. Empty cans of baked beans, chili and Vienna sausages are piled next to Four Loko cans, jars of peanut butter and empty juice boxes. “Where’s our skate park?” is painted onto the wall in blazing red. A Thanksgiving card with a teddy bear on the outside lies on the pavement. Nana wishes the best to granddaughter Heather and son Dave. 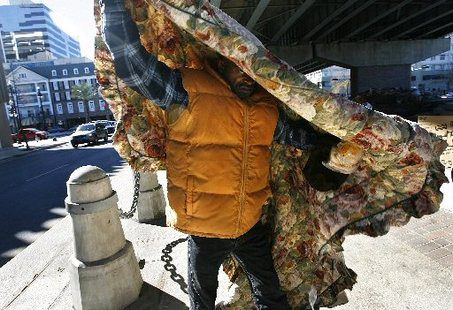 New Orleans has 3,000 to 6,000 homeless people living in abandoned buildings, according to an August 2010 report by Unity of Greater New Orleans. The report, “Search and Rescue Five Years Later: Saving People Still Trapped in Katrina’s Ruins,” notes homelessness has doubled since Katrina. Seventy-five percent of the people in those buildings are survivors of Hurricane Katrina. Outreach workers report many are disabled but many also work. Inside abandoned buildings live full-time sitters and restaurant workers.

Since Katrina, New Orleans has a severe homeless problem because of the scarcity of affordable housing. HUD and local governments demolished over 4,000 affordable public housing apartments after Katrina. “The current housing crisis in New Orleans reflects the disastrous impact of the demolition policy,” according to the U.N. Special Rapporteur on Adequate Housing in a February 2010 report very critical of the United States. Rents rose. Tens of thousands of homes remain vacant. Over 30,000 families are on the waiting list for affordable housing.

A November 2010 report from the Greater New Orleans Community Data Center pegs the number of vacant and blighted properties at over 40,000 in New Orleans with more in the suburbs – 14,000 of which are owned by the government.

Unity for the Homeless has been asking for help for people living in abandoned buildings for years. They have four outreach workers who nightly check on people living in abandoned buildings. Five recommendations from Unity to help these thousands of people: convert abandoned building into housing for the homeless; fund case managers to help people with disabilities move into housing; fund additional outreach and housing search workers; create a small shelter with intensive services for people with mental health problems who are resistant to shelters; and make a serious investment in affordable rental housing. There are several hundred housing vouchers available for disabled homeless people but no money to fund the caseworkers they need.

Nationally, the U.S. has severely cut its investment in affordable housing despite increasing need from the foreclosure and economic crises. Homelessness is of course up all over. The U.S. Conference of Mayors reported in December 2010 that demands for food and housing are up across the country. The causes? Unemployment, high housing costs and low wages.

Will we look into our abandoned buildings and look into the eyes of our abandoned daughters and sons and sisters and brothers? Will our nation address unemployment, high housing costs and low wages? Will we address the abuse, neglect and family conflict that create homelessness for millions of youth, especially gay and transgender youth? Or will the fires continue and the lives end?

Bill Quigley is legal director of the Center for Constitutional Rights and law professor at Loyola University New Orleans. You can reach him at quigley77@gmail.com

More Than A Roof Trailer from NESRI on Vimeo.