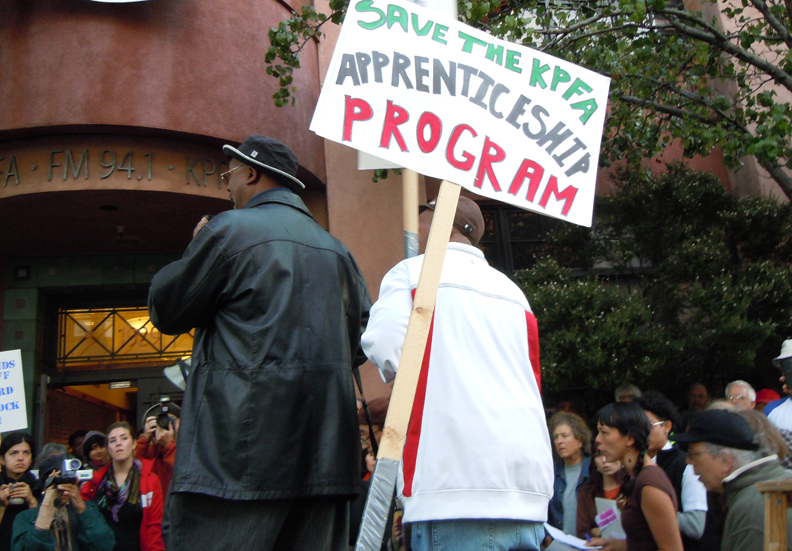 I was raised by several generations of labor organizers, and in every labor dispute my side is easily chosen. I don’t cross picket lines, and I always stand with the workers against their bosses. The current conflict inside KPFA is the first time I’ve ever seen my community divided on an issue concerning labor solidarity.

While labor struggles are usually strictly polarized, it is important to keep in mind that KPFA is a nonprofit community radio station, where the traditional class lines are much harder to draw. In theory, the community is in charge of the station, or at least it should be. It’s the community who pays the bills and who this station claims to serve.

Community radio is supposed to be by and for the community, more like a movement than a business. The majority of KPFA workers are community members, who donate their labor for free.

As some tasks require consistent, daily attention, a limited number of workers must be paid for their time, because volunteering the necessary hours would interfere with their ability to make a living. The line between workers and management is blurry, to say the least.

For some time now a group among the paid workers and their allies on the Local Station Board (LSB) have largely held control over the management of the station. With the capitalist economic crisis crippling our communities, the station’s income has understandably been less.

When budget cuts had to be made, they were agreed to by this group but were never implemented. This happened two years in a row. With each new budget, the cuts were deeper, because the previous cuts were never made.

Now the necessary cuts are deeper still, because KPFA funds were massively mismanaged: More money was spent than was coming in, including a million dollars the station had in reserve.

The height of incompetence was achieved when a six figure check intended to earn interest sat in their general manager’s desk for a year instead of being deposited, apparently unnoticed even by their treasurer.

Recent payroll funds had to be borrowed from another station. The station is broke and we’re at risk of losing it altogether.

On the LSB, this managing group was represented by the slate calling itself Concerned Listeners. Right before the last elections, this slate renamed itself Save KPFA, in what appeared to be an effort to confuse and solicit the support of voters who remember the original Save KPFA, which had the polar opposite intent of this group: The original organization officially formed in order to defend community control of the radio station in the 1990s.

This new group, on the other hand, has actively attempted to dismantle community oversight and to defer control to a small percentage of KPFA staff who call themselves KPFA Worker. The appropriation of another organization’s name and attempt to benefit from its history was just one of several unfair campaign practices this group has been involved in over the years. Among other things, they repeatedly used the airwaves to gain support for their slate, without giving the other candidates fair access to do the same.

The new Save KPFA is representing the issue as a labor dispute and is claiming that the union of the paid workers is getting busted. Let me be clear: There is currently NO union busting going on at KPFA.

Because of the deficit and a refusal to actually implement budgets these people had agreed to, the axe that is falling now is impacting some of their own people, not just the jobs of others that they themselves have threatened to eliminate, or eliminated already. These cuts are being represented as going by a “hit list” against progressive programmers, but actually they are being made by seniority and follow the guidelines of their own union contract, unlike the cuts they have advocated themselves. It’s terrible to see people losing their jobs, but this is not union busting by any stretch of the imagination.

Let me be clear: There is currently NO union busting going on at KPFA.

The real union busting that happened at KPFA was in the 1990s, when the Pacifica National Board, which was at the time undemocratically appointed, hired professional union busters, the American Consulting Group. They busted the independent, progressive United Electrical, Radio and Machine Workers of America (UE), which represented all KPFA workers, both paid and unpaid.

Local 9415 of the Communications Workers of America (CWA) swooped in like a vulture and became an exclusive job trust for the paid staff. Many people now refer to the managing faction of the still unionized workers as the “entrenched staff,” and some call the CWA a “scab union.”

From the start, the CWA played the divisive role of an elitist private club, rather than that of a union. To this date, unpaid workers, who currently make up about 80 percent of KPFA’s workforce, are barred from membership. Many of them have been donating their labor to KPFA for many years. Without them, the station and community radio cannot exist.

Unpaid staff represented by the UE were entitled to such benefits as travel expenses and childcare. The latter is particularly relevant in considering what happened to Nadra Foster in 2008, when she was accused of misappropriating KPFA resources, after printing out a few sheets of math homework to keep her children engaged while she was working.

This accusation led to her getting banned from the station, charged with trespassing and beaten and injured by the cops, who were called by management without any interference from the entrenched staff. Even in the aftermath, their names are conspicuously absent among those of 74 of their fellow workers who condemned management’s use of police force and expressed solidarity with Nadra.

The year prior, right before the 2007 LSB elections, the Unpaid Staff Organization (UPSO), which is the closest thing to a union for volunteering workers at KPFA, was decertified – a friendly name for union busting – by station management supported by these Concerned Listeners. This move eliminated the rights of many of the unpaid staff to participate in the elections.

In 2005 a leaked email among members of the entrenched staff and their supporters, the suggestion was made that perhaps the LSB should be dismantled altogether. Under their management, the Program Council, previously in charge of deciding programming, has also been effectively stripped of its power. Does this sound like community control?

As a child of the labor movement, I am appalled to see people who are behaving as management at the station opportunistically exploiting their on-paper union membership to solicit the support of the labor movement and the left, while they are refusing to comply with the very union contract that was negotiated on the backs of their sacrificed fellow workers.

I believe that the fake Save KPFA – on Indybay someone refers to them as “Slave KPFA” – and the KPFA Worker group are misrepresenting this as a labor dispute in an attempt to politically legitimize their turf war. What they are teaching listeners about community building and organizing labor are disastrous lessons to be aired on a supposedly progressive radio station and represents a grave disservice to the community at large and the labor movement in particular.

The recent “informational picket” was another example of this group merely posturing as organized labor. Using the word “picket” to describe a protest, which does not have the explicit intent to blockade, teaches people that real picket lines are negotiable, that it’s okay to cross them.

Historically picket lines are not merely gatherings where we exercise free speech. They are a very specific form of direct action. Picket lines mean don’t cross! It’s not a matter of semantics. Picket lines are THE militant direct action tradition of the labor movement. Of course, this point is likely lost on KPFA’s current union staff, since their right to strike was bargained away for higher pay by the CWA, as they betrayed their fellow workers of the UE.

The Pacifica management of the 1990s recognized that the UE represented not just workers, but that the workers in turn represent our communities. Replacing the UE with the CWA created a deep division within KPFA and paved the way for what we are witnessing today.

The current crisis is part of a long history of attempts to undermine community control at the station and to turn it into just another mainstream professional media outlet. But one doesn’t have to be a professional to understand what generations of working class people have taken for granted as basic common decency: Any labor organization that does not represent all workers has no business calling itself a union.

Union corruption has become a stereotype used by conservatives to rally working people against unionizing. What they conveniently leave out is that unions belong to workers, not to paid union bureaucrats who corrupt the union’s integrity, as well as their own, as they negotiate compromises with the boss. When there is such corruption, it’s the responsibility of the rank and file to reclaim the union as the tool for which it was intended.

A union’s primary purpose is to unite workers. The CWA must be held accountable, not be rewarded with community solidarity, for its divisive role at KPFA.

If the union continues to refuse membership and the right to collective bargaining to the majority of KPFA workers, unpaid workers owe it to themselves and their communities to organize union representation for themselves elsewhere. I urge the KPFA community at large, including those paid workers who still remember what solidarity really means, to encourage and actively aid such efforts.

Author’s note: The author is an autonomous activist, who is not affiliated with, nor endorses, any of the Local Station Board election slates, nor any other organization, but writes strictly from her own conscience. The embedded links in this text are not exhaustive evidence to support my views, but merely a small selection of additional information I found personally helpful in illustrating my position. I encourage all to do your own research and fact-checking and reach your own conclusions.

Isis Feral can be reached at isisferal@yahoo.com. 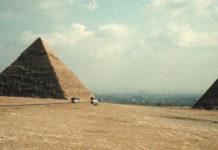