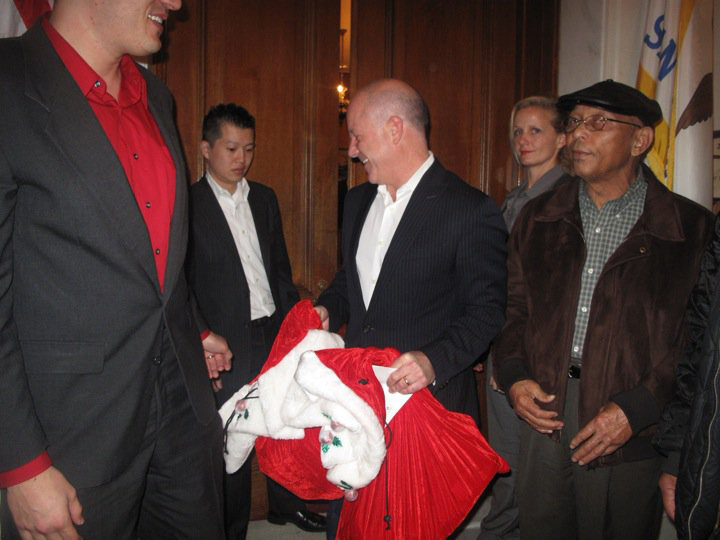 San Francisco – With unemployment at its highest in decades and one day after the Chronicle reported that 41 percent more San Franciscans requested assistance feeding themselves and their families this year, dozens of out-of-work San Francisco residents convened at City Hall on Wednesday, Dec. 22, to ask Mayor Gavin Newsom to sign the local hiring law that a super-majority of the Board of Supervisors passed last week.

Workers and advocates brought 1,000 Christmas cards signed by residents of Bayview Hunters Point, Chinatown, the Mission, the Tenderloin, South of Market and other neighborhoods asking the mayor to “put the Merry into Christmas and the Happy back into New Year” by signing the landmark jobs measure sponsored by Supervisor John Avalos by Christmas Eve. As recounted by the San Francisco Bay Guardian, two Santa Claus bags full of Christmas cards were delivered to the Mayor’s Office, with Chief of Staff Steve Kawa accepting them in the mayor’s absence. “These are awfully heavy,” Kawa commented.

Last week, Bayview-based job advocates Aboriginal Blackmen United (ABU) circulated a letter to Mayor Newsom with the “put the Merry into Christmas” jobs slogan attached, and the letter reached Newsom himself late last Friday. The idea caught on, with community advocates Brightline Defense Project printing up 1,000 more cards, on 100 percent recycled paper no less, and working with ABU and other organizations such as Chinese for Affirmative Action, PODER, the A. Philip Randolph Institute and the SF Bay View newspaper to collect signatures from unemployed workers, activists and concerned citizens throughout the city.

ABU’s Joseph Greene, an out-of-work member of the Cement Masons union trying to work his way into the Laborers union, could be seen collecting signatures in every neighborhood in San Francisco over the past several days. Supervisors Avalos, Bevan Dufty and Eric Mar even got in on the action, penning local hiring Christmas cards to Mayor Newsom.

San Francisco’s local hiring law is believed to be the nation’s strongest, requiring 20 percent of all workers within each construction trade to be local residents starting in 2011, with an emphasis on workers from disadvantaged backgrounds and neighborhoods. That number will increase 5 percent annually, as local workers join trades where community representation is lacking, before reaching 50 percent. An op-ed this week by Assessor-Recorder Phil Ting noted that the local hiring law will strengthen the city’s middle class tax base by creating jobs, while the City Controller estimates the measure will pump $270 million into the local economy over the next 10 years. 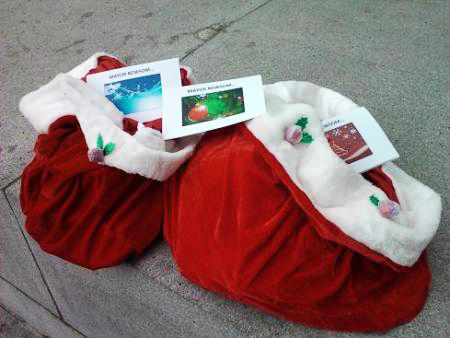 Advocates have already begun reaching out to the Bay Area cities of Oakland and Richmond to pursue reciprocity agreements that ensure opportunities for other Bay Area cities on jobs not performed by San Francisco residents. This week, the San Mateo Board of Supervisors tried to fill the stockings of unemployed San Franciscans with coal by asking Mayor Newsom to veto the community’s local hiring law. San Mateo County, which contains cities like East Palo Alto that have local hiring ordinances, complained after San Francisco approved a local hiring policy of its own that the Avalos law would take away work for San Mateo workers at the San Francisco Airport and on the Hetch Hetchy Water System Improvement Project.

“Didn’t the San Mateo Supervisors bother to read our legislation?” was the refrain heard around San Francisco City Hall yesterday, however, as both the Airport and the Water System Project were specifically exempted from the measure that currently sits on Mayor Newsom’s desk, leaving an estimated 20 jobs demolishing the San Bruno jail as the only work in San Mateo County impacted by the San Francisco local hiring ordinance. The Avalos law would require four of those jobs for San Francisco residents if that project goes forward next year.

“We’re here to say that we are not going to let these San Mateo politicians who can’t even read ruin our Christmas,” said ABU president James Richards, a journey-level member of the Electricians union and a union contractor, who came up with the local hiring Christmas card idea. “We want the mayor to stand with us instead of them and put the Merry into Christmas.”

“Mayor Newsom has in front of him a law that works for the city, for the region, for labor, for contractors and, most importantly, for our unemployed and job-hungry communities,” said Brightline Executive Director Joshua Arce, who worked with Supervisor Avalos and advocates from the Bayview, Chinatown and the Mission to help craft San Francisco’s local hiring policy. “This is a Christmas gift nearly 50 years in the making.”

Advocates visiting Mayor Newsom Wednesday had hoped that the mayor would come out from his office to greet them and sign the community’s local hiring law. Instead, however, they found the door to his office, Room 200, locked tight. Eventually Chief of Staff Steve Kawa emerged smiling – though he closed the door behind him – to accept the thousand colorful cards packed into two of Santa’s red bags.

On Thursday, Mayor Newsom announced he would neither sign nor veto local hire, saying, according to the San Francisco Chronicle blog City Insider, “he had reservations about parts of it and wanted the city to pursue reciprocity agreements with neighboring counties. Since his move was short of a veto, the measure will go into effect in 2011. …

“Even if Newsom had tried to kill the measure, his veto likely would have been overturned. A veto-proof majority of the board had approved the measure earlier this month on an 8-3 vote.”

A jubilant Supervisor John Avalos proclaimed victory Thursday evening on his Facebook page: “Get out your hammers, your levels and your measuring tapes. Local hire is the law of the land in Frisco!”

Brightline Defense Project is a non-profit civil rights advocacy organization dedicated to protecting and empowering communities. Brightline’s efforts have led to the prevention of a new power plant in Southeast San Francisco and increased employment opportunities for economically disadvantaged residents, particularly in the green jobs sector. Learn more at www.brightlinedefense.org. Executive Director Joshua Arce can be reached at josh@brightlinedefense.org. Bay View staff contributed to this story.