Recorded and edited by On the Block Radio

On Jan. 15, 2011, members of the Askia Coalition Against Police Brutality convened a tribunal to address police brutality in Philadelphia. This 17-minute radio piece contains excerpts from the testimony of expert witnesses and victims of police brutality – Baseemah Muhammed, Abdus Sabur, Askia’s father, and Annette Dickerson, among others – as well as interviews with members of the Askia Coalition Against Police Brutality. The coalition was formed in the wake of the attack against Askia Sabur in West Philadelphia on Sept. 3, 2010, as a vehicle for putting an end to police brutality in Philadelphia.

by the Askia Coalition Against Police Brutality

Philadelphia, Penn. – The People’s Tribunal Against Police Brutality and Misconduct will be convened amidst a whirlwind of public debate, legal battles and community protest sparked by the upsurge in police brutality. This independent community legal proceeding is being initiated by the Askia Coalition Against Police Brutality (ACAPB) and will be convened on Saturday, Jan. 15, at 11:00 a.m. 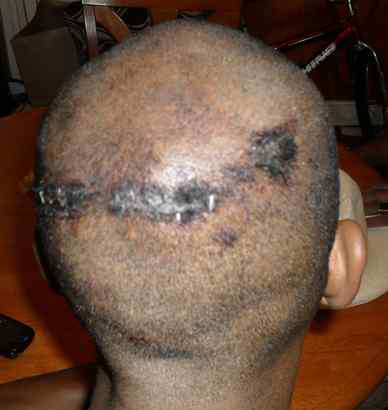 Its organizers insist that it is not a “mock trial.” The tribunal will gather testimony from victims of police brutality for submission to the U.S. Commission on Civil Rights and the Human Rights Commission of the United Nations. In addition, the tribunal will serve to educate community residents about their legal and constitutional rights as they pertain to “stop and frisk” and mobilize community residents to take action at the polls during this year’s mayoral and city council elections.

The tribunal will feature two kinds of testimony: The first will come from community residents who have been victimized by the Philadelphia police. Key witnesses will include the family of Askia Sabur, whose Sept. 3, 2010, beating by 19th District police officers was captured on video tape and broadcast on YouTube. The most well known witness will be Ramona Africa, the lone adult survivor of the May 13, 1985, police bombing which murdered nine children, women and men of the MOVE organization.

The second form of testimony will come from expert witnesses – ranging from journalists, political activists and legal professionals whose expertise will be used to examine the systemic nature of police brutality in Philadelphia and the U.S. Annette Dickerson of the New York-based Center for Constitutional Rights will report on the ongoing legal struggle against “stop and frisk” in New York City.

Philadelphia’s ACLU has a pending lawsuit against the City of Philadelphia, calling into question the constitutionality of the tactic. Nationwide, stop and frisk has been scrutinized for being unconstitutional and a tool to legitimize racial profiling.

Attorney Leon Williams will discuss the civil suit being filed on behalf of Ramona Africa and the MOVE organization against the City of Philadelphia. To this day, no public official has had to face criminal charges for state sanctioned murder which was carried out on May 13, 1985.

ACAPB members believe that a tribunal of this type is necessary due to the systemic nature of police brutality in Philadelphia and the U.S. The state has given police the legal license to commit acts of murder and brutality with impunity.

The coalition cites the political influence and financial backing of the Fraternal Order of Police as a corrupting influence on local politicians, who seek FOP endorsements and campaign contributions while turning a blind eye to brutality. After securing the FOP endorsement, District Attorney Seth Williams rewarded his FOP backers by appointing Christopher Werner to lead his bureau of county detectives.

This promotion is extremely questionable, as Werner was the head of the 25th District unit now under federal investigation for armed robbery and drug dealing. The beating of Askia Sabur and other victims is the product of a culture of police violence entrenched in Philadelphia and fortified by Police Chief Frank Rizzo’s dirty war against the Black Liberation Movement.

The tribunal proceedings cite the U.N. Human Rights Charter and the U.N. Convention on Genocide as its legal foundation.

In addition, its organizers plan to back up the legal principles of the tribunal with political action designed to bring about greater community control and political accountability. In addition to witness testimony, attendees of the tribunal will be able to file formal complaints against the police and get resources on expungement from the National Lawyers Guild and other information about knowing and protecting one’s rights.

The tribunal proceedings will be held at the Songhai City Cultural Center at 3117 Master St. in North Philadelphia. For more information, call (215) 300-6480.

Contact the Askia Coalition Against Police Brutality through Vania Gulston at niagulston@yahoo.com.

Listen to a great Block Report interview by Minister of Information JR with Askia’s father broadcast Jan. 12 on Hard Knock Radio on KPFA in the Bay Area and on many other stations nationwide, at http://kpfa.org/archive/id/66759. It will be available until Jan. 26. The whole show’s good, but to go straight to that interview, push the slider to 46:33.