Today, Haiti’s first democratically elected president, Jean Bertrand Aristide, whose return to Haiti is demanded daily by his people – he was kidnapped Feb. 29, 2004, in a U.S.-engineered coup and has since lived in South Africa – wrote the following letter to the South African and Haitian governments seeking to return home. But, asks Ezili Danto, who forwarded his letter, “If Duvalier can, without trouble, travel on an EXPIRED Haitian passport, why can’t President Aristide do the same?”

“I would like to thank the government and the people of South Africa for the historic hospitality, deeply rooted in Ubuntu, extended to my family and me.

“Since my forced arrival in the Mother Continent six and a half years ago, the people of Haiti have never stopped calling for my return to Haiti. Despite the enormous challenges that they face in the aftermath of the deadly Jan. 12, 2010, earthquake, their determination to make the return happen has increased. 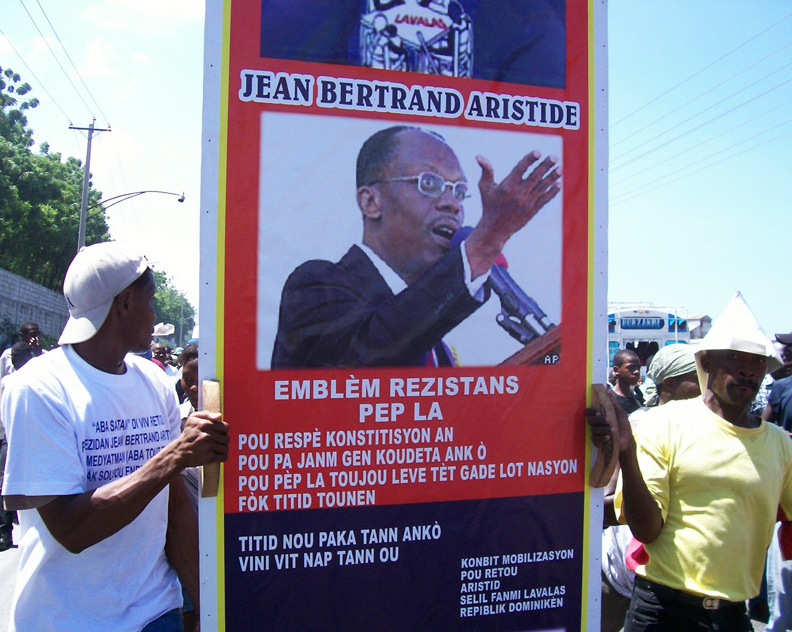 “As far as I am concerned, I am ready. Once again I express my readiness to leave today, tomorrow, at any time. The purpose is very clear: To contribute to serving my Haitian sisters and brothers as a simple citizen in the field of education.

“The return is indispensable, too, for medical reasons: It is strongly recommended that I not spend the coming winter in South Africa because in six years I have undergone six eye surgeries. The surgeons are excellent and very well skilled, but the unbearable pain experienced in the winter must be avoided in order to reduce any risk of further complications and blindness.

“So, to all those asking me to return home, I reiterate my willingness to leave today, tomorrow, at any time. Let us hope that the Haitian and South African governments will enter into communication in order to make that happen in the next coming days.

“United to the Haitian people, once again my family and I express our sincere gratitude to the government and the people of South Africa.”

Obama’s change in Haiti: the return of Jean Claude Duvalier

Bay kou blye, pote mak sonje. (The one who gives the blow, forgets. The one who bears the mark remembers.) – Haitian proverb 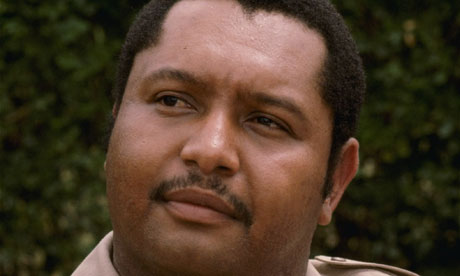 Over 60,000 and some say as many as nearly 100,000 Haitians were murdered under the bloody U.S.-supported Duvalier (father/son) dictatorships from 1957 to 1986. Browse the galleries of the Fort Dimanche website for stories and pictures of the dead – those political prisoners who were imprisoned, tortured and killed at Fort Dimanche.

“Throughout the blood-drenched rule of the Duvaliers (nearly 100,000 killed by the Tontons Macoutes alone), the U.S. barely uttered a peep about human rights violations. In 1986, however, when it became apparent that Baby Doc’s presidency could not in fact be sustained for his entire life (unless he died soon), the Reagan administration airlifted him to a retirement villa in France and started talking about the ‘democratic process,’” wrote Mark Zepezauer in “The CIA’s Greatest Hits.”

Why would the world’s most powerful nation, the United States, allow this?

Well, their pillage of poor Haiti is butt-naked right now. At the one-year anniversary of the Haiti earthquake, even the conservative media is talking about the failure of U.S. aid, the U.N. and the NGO poverty pimping business in Haiti. Thus, the U.N., as U.S. proxy, needs to justify its job in Haiti.

These folks think of us Haitians as simplistic animals, so why not set up what’s worked for them in other parts of the world? The bringing back of Jean Claude Duvalier, Haiti’s bloody dictator, is, in their plantation minds, sort of like setting up a Hutu/Tusti thing – Duvalier/Lavalas – a civil war in Haiti, an insecurity to bring “order” to. 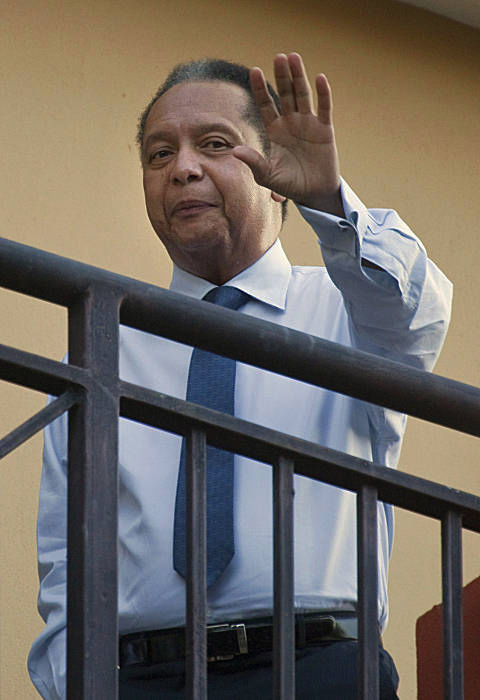 Bill Clinton, the poverty-pimp NGOs, the repugnant U.N. and the foreign-imposed IHRC need to distract the world from the donation dollars that are being pocketed or not collected, so hey, let’s rack up the colonial narrative: Remind everyone of those “anti-democratic Haitians not ready for the same standards” as the rest of the “civilized” world. Those infighting, violent, illogical Haitians in love with dictatorship!

Why not set up the chess board, right before Feb. 7, the 25th anniversary of the ouster of Jean Claude Duvalier, and bring him back to push the two OAS/Duvalierist candidates, Manigat and Martelly (Sweet Mickey), so everyone can forget about the masses’ wishes; their total disenfranchisement; the 300,000 dead in 33 seconds and those 1.5 million still homeless without sanitation, shelter, clean water; the return of President Aristide; the international fraud since 2004; these imposed U.N./U.S. elections; and the U.N.-imported cholera.

We’re just puppets the international community, led by the U.S., are moving around their own battlefield. Haiti is not in control. Haitians are not in control. Air France and American Airlines can land anyone in Haiti.

If Air France wanted to bring Osama bin Laden into Haiti, how could Haitians stop it? Still, we Haitians will be blamed, as usual, for all the outrageous acts the wealthy powers-that-be do in Haiti. The “Friends of Haiti” continue with their macabre plan to further destabilize and exacerbate Haiti’s already agonizing sufferings.

But it’s our fault also. We Haitians sit around reacting, waiting for THEM to act so we can react. Waiting for the OAS to tell us it didn’t make a mistake and the not fair, not free, non-inclusive Nov. 28 election it helped orchestrate is not too fraudulent and illegal. HLLN wanted to go to Haiti and make a public statement about the fraudulent election, but we could not get any real support. It’s their play and their game. We’re just consumers of this abomination!

Thank you for this “change,” President Barack Obama!

No, Haitians shall not merely consume the repugnant U.N. occupation along with the return to outright dictatorship and this contempt for Haitian rights shown by France, the United States and the Internationals. Haitians are entitled to a participatory democracy and basic human rights. The return of the bloody Baby Doc dictator does not show respect for the democratic rights of Haitians.

Haitians are entitled to a participatory democracy and basic human rights. The return of the bloody Baby Doc dictator does not show respect for the democratic rights of Haitians.

Haitians deserve justice and respect, not charity, not this return. That means Jean Claude Duvalier must be immediately arrested and tried for the murder, torture and deprivation of human rights he caused. Nearly 100,000 Haitians were tortured and murdered from 1957 to 1986. We have the duty to remember and demand justice for these innocent Haitian lives and freedoms lost.

We must also make clear the difference between democracy and dictatorship and not allow the self-serving Haiti oligarchy and their Haitian zentellectuals, the U.N. and USAID State Department drones to fudge the lines with their double-speak and photo op-eds of “Duvalier returns amidst praise” as if even if this wasn’t orchestrated and manufactured to show Haitian consent, staged “praise” at the airport could trump legal and moral laws and strictures against mass murder, false imprisonment and torture.

Justice for Haiti means the immediate arrest of the dictator, Jean Claude Duvalier; the return of the democratically elected Jean Bertrand Aristide; the end of the U.N. occupation; an end to the NGO charity industry in Haiti; a stop to Western-dominated exploitation of Haiti resources and lands – through assembly plants, plantations, mines – to serve consumers abroad and Western corporations; investment in Haiti food sovereignty, domestic production, jobs and development; and new free and fair elections in Haiti with all eligible political parties permitted to participate, including the Fanmi Lavalas party.

Justice for Haiti means the immediate arrest of the dictator, Jean Claude Duvalier and the return of the democratically elected Jean Bertrand Aristide.

Listen to Ezili Dantò speak on “Haiti priorities and accountability,” an interview with Wiatta on WRFG Jan. 13, 2011:

Strong winds may bend the bamboo tree all the way down to the ground, but it snaps right back up. It doesn’t break, no matter how strong the wind. So, Haitians have a saying: Nou se rozo. Nou pliye, nou pa kase. Like the bamboo tree, we bend but we don’t break; like the flexible bamboo tree, we Haitians use even the momentum of our falls to stand back up.

Kwame Ture (Stokely Carmichael) on the History of Haiti