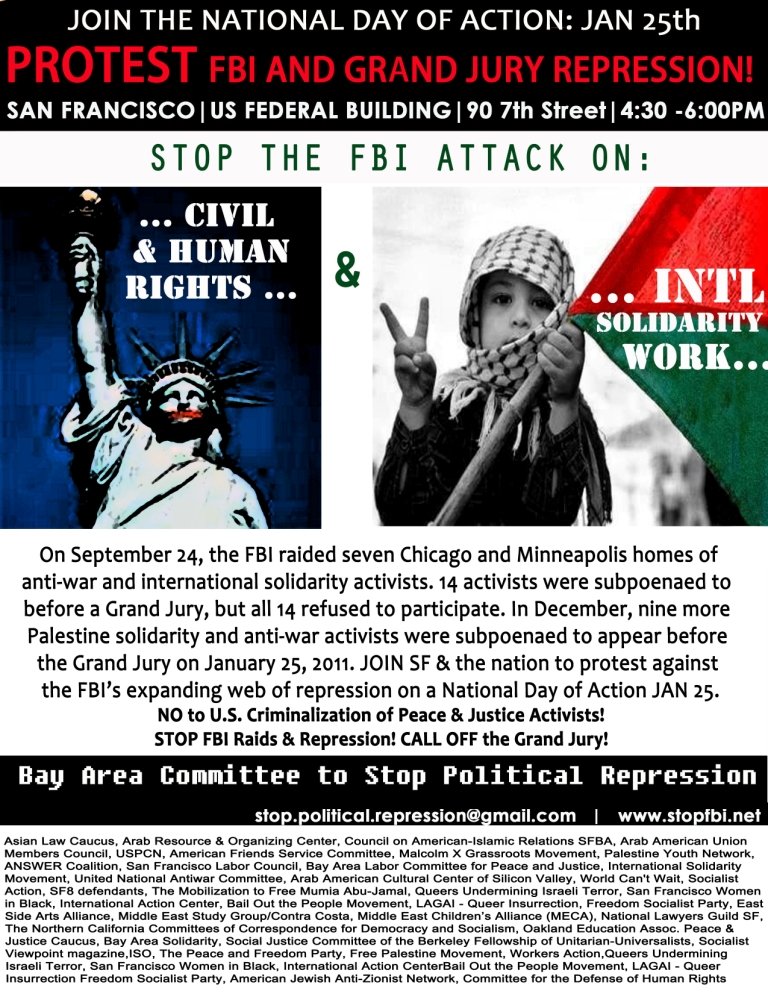 The FBI began targeting peace and justice activists in September 2010, raiding the homes of seven Chicago and Minneapolis activists and the offices of the Minneapolis-St. Paul Anti-War Committee and issuing subpoenas for 14 activists to appear before a grand jury. In December, another nine anti-war and Palestine solidarity activists in Chicago were subpoenaed. In addition, the FBI has questioned activists in Wisconsin, North Carolina, Oakland and San Jose. Across the country organizations and individuals are standing together to protest the United States government’s attempt to silence and criminalize anti-war and international solidarity activists in solidarity with them. To learn more, go to www.stopfbi.net. Sign the updated petition at www.stopfbi.net/petition.

I began my career as a political movement lawyer. The government was rounding up the last of the diehard militants, many of whom had been underground, and prosecuting them as a part of the pincer movement.

They also subpoenaed anyone with any tangential relationship to those who had been arrested. I am talking about their daters, their lovers, their teachers, their religious leaders, their estranged relatives, those who had attended meetings, rallies etc.

All of these activities centered upon an expropriation in suburban New York of a Brinks armored truck and the people who were arrested then and later. The purpose? to intimidate that branch of the movement that could be counted on to support militancy and troll for even the most insignificant crumbs of information that might be fitted together to enmesh suspects.

What happened? Most people who had been taped by the government lawyered up with movement lawyers, guided in part by the legal work of Bob Boyle and Guild lawyers who had written legal representation before grand juries which remains the standard on what to do and when to do it. A person subpoenaed is in the unenviable position of having only the vaguest idea of what the government may want and is faced ultimately with the choice of testifying against comrades or spending long months in jail.

They may even face a possibility of being indicted for contempt and facing a sentence that is completely up to a judge. In the face of this challenge in that day, I can only say that most people chose not to testify and to wait out the government. They gave up an existence as they were living it – jobs, relationships and all that constitutes daily life, and they went to jail. And they stayed in jail for many months and they didn’t give in.

Now we are in another era – one that was not born from the euphoria and idealism of the ‘60s – and the government is once again arresting, subpoenaing and tormenting movement people, hoping they will become informants. And the reaction of the movement? We resist.

We stand strong with the resisters who elect not to become part of the same prosecution team that has terrorized the world. Now the so-called Department of Justice (ha!) has decided to focus on support groups of the world’s peoples and also on eco-terrorism. Why? Because they can!

It sends a message to the people that it’s dangerous; don’t join, don’t resist. That message must once again be shouted down, first by the resisters who will go to jail and second by us, the movement who must support them by always filling those cold marble courtrooms to show our solidarity and by speaking out so that their sacrifice is constantly remembered. 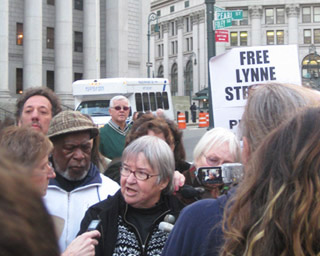 Our principle of non-collaboration has so far proved robust. There has been no wavering. Our support must continue to convince everyone involved that these are issues of principle. There can be no compromise. Resisters must be defended to the utmost of our strength and abilities.

Lynne Stewart is a legendary human rights defense lawyer who was convicted of providing material support – through a press conference and allowing access by her translator – to a terrorist conspiracy when representing “the blind sheikh,” Sheikh Omar Abdel-Rahman, the Egyptian cleric who was convicted in 1996 of plotting terrorist attacks against various sites in the New York City area. Lynne was sentenced to 10 years in federal prison. Write to Lynne: Lynne Stewart, 53504-054, FMC Carswell, P.O. Box 27137, Fort Worth, TX 76127.

Why I will not testify

I have been summoned to appear before a federal grand jury in Chicago on Jan. 25. But I will not testify, even at the risk of being put in jail for contempt of court, because I believe that our most fundamental rights as citizens are at stake.

I am one of 23 anti-war, labor and solidarity activists in Chicago and throughout the Midwest who are facing a grand jury as part of an investigation into “material support for foreign terrorist organizations.”

No crime has been identified. No arrests have been made. And when it raided several prominent organizers’ homes and offices on Sept. 24, the FBI acknowledged that there is no immediate threat to the American public. So what is this investigation really about?

The activists who have been ensnared in this fishing net work with different groups to end the U.S. wars and occupations in Iraq and Afghanistan, to end U.S. military aid for Israel’s occupation of Palestinian land and U.S. military aid to Colombia, which has a shocking record of repression and human rights abuses. All of us have publicly and peacefully dedicated our lives to social justice and advocating for more just and less deadly U.S. foreign policy.

I spent a year and a half working for a human rights organization in the occupied West Bank, where I witnessed how Israel established “facts on the ground” at the expense of international law and Palestinian rights. I saw the wall, settlements and checkpoints and the ugly reality of life under Israeli occupation, which is bankrolled by the U.S. government on the taxpayer’s dime.

Many of us who are facing the grand jury have traveled to the Israeli-occupied West Bank and Colombia to learn about the human rights situation and the impact of U.S. foreign policy in those places so we may educate fellow Americans upon our return and work to build movements to end our government’s harmful intervention abroad.

Travel for such purposes should be protected by the first amendment. But new legislation now allows the U.S. government to consider such travel as probable cause for invasive investigations that disrupt our movements and our lives. 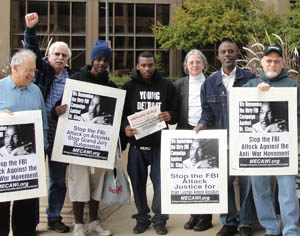 The June 2010 U.S. Supreme Court decision Holder vs. Humanitarian Law Project expanded even further the scope of the Antiterrorism and Effective Death Penalty Act of 1996 to include First Amendment activity such as political speech and human rights training.

Even former President Jimmy Carter feels vulnerable under these laws because of his work doing elections training in Lebanon, where one of the main political parties, until earlier this month a member of the ruling coalition, is listed as a “foreign terrorist organization” by the U.S. State Department. “The vague language of the law leaves us wondering if we will be prosecuted for our work to promote peace and freedom,” Carter has said.

Former FBI officer Mike German, who now works with the American Civil Liberties Union, told the television program Democracy Now! that the subpoenas, search warrants and materials seized from activists’ homes make it clear that the government is interested in “address books, computer records, literature and advocacy materials, First Amendment sort of materials.” He added, “Unfortunately, after 9/11, (investigation standards) have been diluted significantly to where the FBI literally requires no factual predicate to start an investigation.”

The U.S. government doesn’t need to call me before a grand jury to learn my activities and my beliefs. I have often appealed to my elected representatives to take a principled stand on foreign policy issues, protested outside federal buildings and have written countless articles over the years that can be easily found through a Google search.

Witnesses called to testify to a grand jury have no right to have a lawyer in the room and the jury is hand-picked by government prosecutors with no screening for bias. It is the ultimate abuse of power for a citizen to be forced to account to the government for no other reason than her exercise of constitutionally protected freedoms of speech and association.

This is why these grand jury proceedings are a threat to the rights of all Americans and why those of us who have been targeted, and others in the movements we work with, call them a witch hunt. And, even though it means I risk being jailed for the life of the grand jury, I will not be appearing before it.

The grand jury has been scrapped in virtually all countries and more than half the states in this country. There is a long American history of abusing grand juries to launch inquisitions into domestic political movements, from the pre-Civil War abolitionist movement to labor activists advocating for an eight-hour work day to the anti-war movement during the Vietnam years.

We have done nothing wrong and risk being jailed because we have exercised our rights to free speech, to organize and hold our government accountable. It is a dark day for America when people face jail for exercising the rights that we hold so dear.