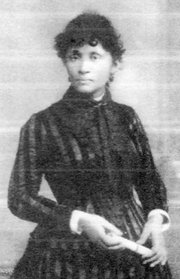 Lucy Parsons is the Haymarket Square widow who internationalized the struggle for the eight-hour day and whose work led to the May Day rallies held around the world, except in the U.S., to celebrate International Workers Day. I have known about Lucy Parsons most of my adult life but have read little of what she actually said. This is probably because the Chicago police and FBI burned all of her papers and books.

Lucy was born – probably enslaved – in the Oklahoma territory and married to Albert Parsons, a former Confederate soldier, who became a radical labor organizer. I was stunned to learn she didn’t die until 1942 and is buried near the Haymarket martyrs in Chicago. The lesson, in my mind, from the lives of this remarkable couple is that one of the first benefits to all workers that resulted from the ending of slavery, and even though it took much more struggle, was the instituting of the eight-hour day.

Numerous books on the contributions and achievements of African American women rarely if ever mention Lucy Parsons. Charlayne Huntger-Gault, Florence Griffiths Joyner, Shirley Chisholm – all worthies of course – but never ever Lucy Parsons. Who hasn’t been impacted by the legalizing and enforcement of the eight-hour day?

As a disclaimer here, not ony am I not an anarchist but I don’t believe in anarchism. However in certain historical periods it has a positive role to play and there is a passion in the real anarchists that one has to admire.

Utah Phillips, the folk singer, used to tell this story about Lucy Parsons. “Shoot or stab them” was advice that got the anarchist agitator arrested whenever she tried to speak in public. Lucy’s husband was among those anarchists framed and executed for the infamous 1886 Haymarket bombing. Lucy continued to advocate for labor rights and social change. Here’s how Utah told the rest of the story:

“One time, she was speaking at a big May Day rally back in the Haymarket in the middle 1930s during The Depression. She was incredibly old. She was led carefully up to the rostrum, a multitude of people there. She had her hair tied back in a tight white bun, her face a mass of deeply incised lines, deep-set beady black eyes. She was the image of everybody’s great-grandmother. She hunched over that podium, hawk-like, and fixed that multitude with those beady black eyes, and said: “What I want is for every greasy grimy tramp to arm himself with a knife or a gun and stationing himself at the doorways of the rich shoot or stab them as they come out.”

Lest her zeal need a little explaining, Lucy Parsons made this declaration at the founding convention of the IWW in 1905: “Never be deceived that the rich will permit you to vote away their wealth.”

Very little remains of the pamphlets which Parsons published over the course of her life. The authorities considered her “more dangerous than a thousand rioters.” They blocked her entrance to public halls and arrested her whenever she addressed a crowd. When Parsons died, the police confiscated and destroyed her library and papers.