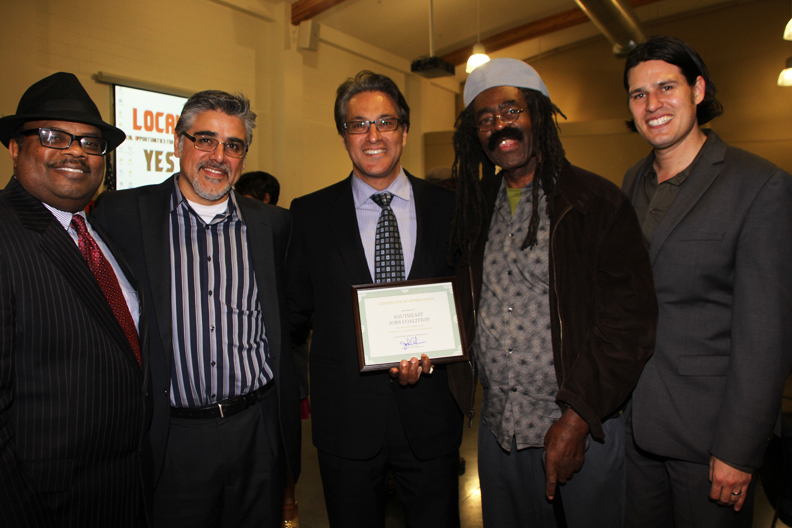 A crowd of over 200 community advocates, elected officials, labor leaders, community contractors and City department heads came together on Feb. 23 to celebrate the passage of the historic local hiring ordinance sponsored by Supervisor John Avalos, adding momentum to the push to implement the law as soon as possible and send unemployed local workers back to work. Laborers Local 261, the first trade union to support the jobs legislation, opened up their hiring hall to play host to dozens of activists from Bayview Hunters Point, the Mission District, Chinatown and other neighborhoods, as Supervisor David Campos kicked off a night to remember for those who worked so hard to end the City’s “good faith efforts” approach to employing local workers on City-funded public works.

Mayor Ed Lee provided an update on the administration’s progress in meeting a March 25 implementation deadline, saying that he is eager to “starting putting the community to work.” Supervisor Ross Mirkarimi, who authored San Francisco’s 2007 workforce consolidation ordinance, was joined by his colleagues, Supervisors David Chiu and Jane Kim, as well as City Attorney Dennis Herrera, Public Utilities Commission General Manager Ed Harrington and Assistant General Manager Harlan Kelly, Department of Public Works Director Ed Reiskin, CityBuild Director Guillermo Rodriguez, City College Trustees John Rizzo and Chris Jackson, and the business managers of both Laborers Local 261 and Carpenters Local 22 in underscoring the extraordinary breadth of support for legislation that was once thought to be unattainable. 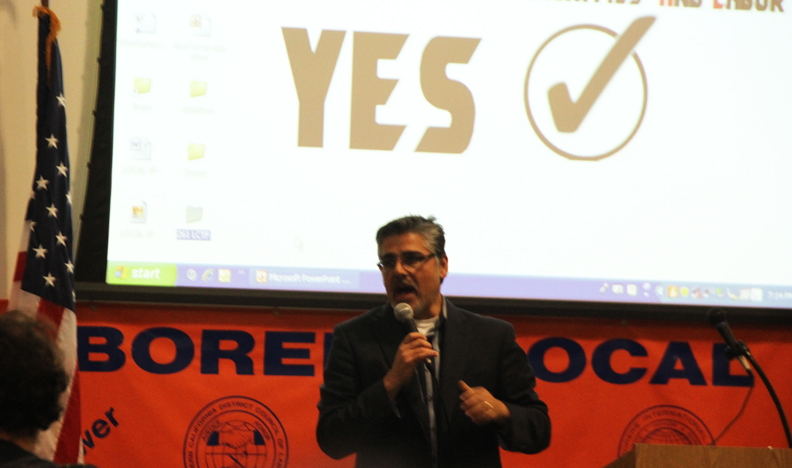 It was Supervisor Avalos himself, however, who placed the night’s celebration within its historical context as a tool to correct past wrongs and elevate opportunities for workers in historically marginalized and disadvantaged communities. The evening’s emcees, Brightline Defense Project’s Joshua Arce and Chinese for Affirmative Action’s Jenny Lam, assisted Supervisor Avalos in a surprise close to the evening in which certificates of appreciation were awarded to many of the hardest working supporters for their assistance in passing the law alongside a proclamation of thanks from Sen. Mark Leno.

Aboriginal Blackmen United were acknowledged for their resilient pressure on City Hall to pass the law, as was the Southeast Jobs Coalition, which one year ago was the only presence at government hearings examining the possibility of a mandatory approach to local hiring. The Progressive Workers Alliance, which was a key organizing force from the moment that John Avalos introduced his legislation, and the Osiris Coalition, which represents a new generation of leadership in the African-American community, were acknowledged along with the Chinatown Families Economic Self-Sufficiency Coalition, which provided advocacy on behalf of limited English-speaking communities.

The Laborers and Carpenters were thanked for their support, as were community contractors Rubecon and Kwan Wo Ironworks and large contractors Webcor and Nibbi Brothers, who went out on a limb in supporting the local hiring law. Press publications including the San Francisco Bay View, San Francisco Bay Guardian and Bay Citizen were recognized for their work in telling the local hiring story as it unfolded in the summer and fall of 2010.

Just as San Mateo Assemblymember Jerry Hill seems to have backed off proposed legislation to ban local hiring after protesters interrupted his Feb. 11 anti-local hiring press conference with a “Jerry Hill: Job Killer” sign, support for local hiring and community opportunity in San Francisco appears to be at an all-time high.