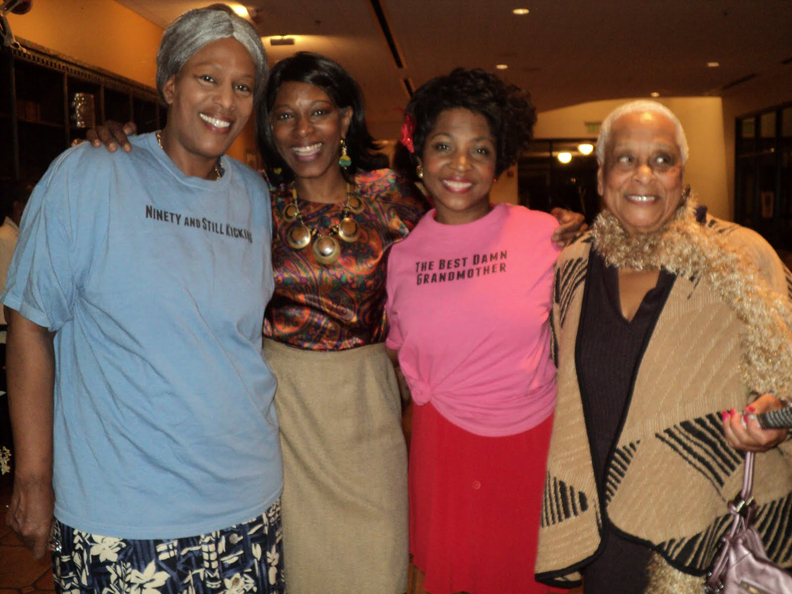 What a juxtaposition of contradictions, but then isn’t that life for all of us to some degree?

I would hope we intend to do better than our parents, yet darn it, it’s certainly difficult even intentionally to move away from that apple tree, the one mama shook. Its sweetness draws us even when we recall the illusions, the bitter taste, the rot and the worms.

We fall down with the hopes of getting up and moving on to greener and more fertile pastures. 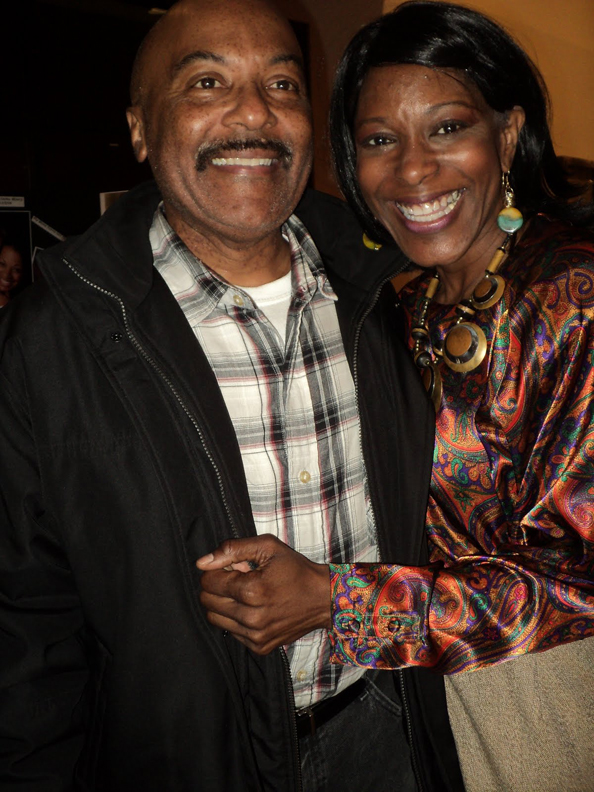 “Jar the Floor” shows how for most of us, especially these women, that is a pipe dream. Actresses Sharon Moore as MaDear, the matriarch we meet at her 90th birthday celebration, is trapped in a nightmare. We don’t meet the cast until Act 2.

When we meet MaDear, she is watching her soaps and in her participatory excitement wakes her granddaughter, MayDee (C. Kelly Wright), who is also expectant this day. The university is going to call to let her know if she has tenure.

Already nerves are on edge; what could possibly push the envelope closer to the edge in this household? Well, in walks Lola, MayDee’s mom, who dresses and looks a lot younger than her conservative daughter.

Anntoinette Johnson’s Lola loves to dance and have fun. She and MaDear don’t exchange a civil word even though Lola takes care of her mother while MayDee works. Lola seems to pitch hit for her daughter on a lot of levels, MayDee’s escape her career. Perhaps we should throw “guilt” into the mix. Career moms, women who want it all, family and career, but can’t find both so they settle for one or the other. In MayDee’s case, career wins, motherhood loses.

It is interesting to watch the women interact. They all love and hate one another, not to mention having a deep seated resentfulness towards each other that spills over and spoils any kind of authentic or potentially loving relationships in the future.

Should we add “jealousy” to the boiling pot as well? 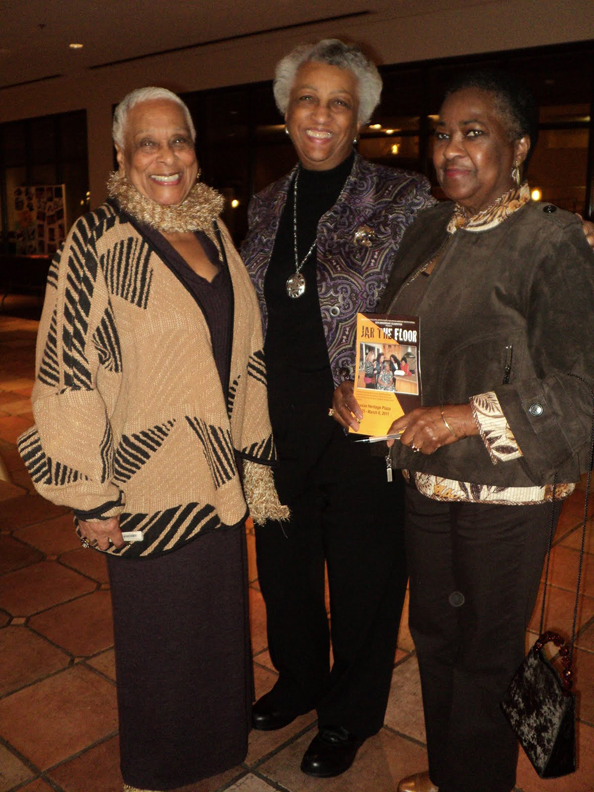 West uses several devises to elicit honest responses from the three older women, who not surprisingly are all carrying secrets too.

Some of these secrets haunt MaDear, who lives at times in the past, her memories haunting her, while Lola is still the chastened unhappy child when she is with her mother, MaDear.

No, there are no happy endings here, the seams a little too raggedy to trim neatly with pinking shears, but when we leave the women literally “Jarring the Floor,” we can see a brighter more open and honest place for each of them in one another’s hearts.

Vennie, the great-granddaughter, and her friend, Raisa (Lacey Sullivan), are the free radicals that push the other elements into corners where all they can do is square off for the fight – in this case – for their lives.

Actress Natasha Noel – Bay Area audiences might remember her as the wicked stepmother in the African American Shakespeare Company’s seasonal production of “Cinderella” – has a knack for making people own their stuff, even if her characters refuse to own their own (smile). However, in “Jar the Floor,” even Vennie comes clean in the end. They all do.

And then there is Vennie’s friend, Raisa, a white girl who meets Vennie at a club where Vennie sings. The two outsiders befriend one another. Raisa has had a mastectomy and is trying to not allow the external scar to scar her inside. She and MaDear have a great moment in the second act.

“Jar the Floor” has these deep moments; it also has light ones. One wonders what MaDear remembers and what she intentionally forgets. Pain is like that: Either one rubs salt into the burn or one lets the air get to it so it can heal. Part of the journey in “Jar the Floor” is getting to the point where each woman can speak, listen, forgive and let go.

That Sankofa concept is one that permeates African Diaspora culture even when one doesn’t acknowledge or name it. It goes to show how culture is innate and even 500 years of separation cannot separate us from something that is ours to begin with.

I highly recommend “Jar the Floor.” It is perfect for adults – men and women – especially multi-generational parties. For 25 years TAATE, as a part of the San Jose Multicultural Artists Guild, Inc., has kept the torch burning – and for that guiding light, we thank them and wish the company 25 plus more (smile).

I hadn’t known the term: “Jar the Floor.” It just means dance, stomp on the floor, cut the rug. 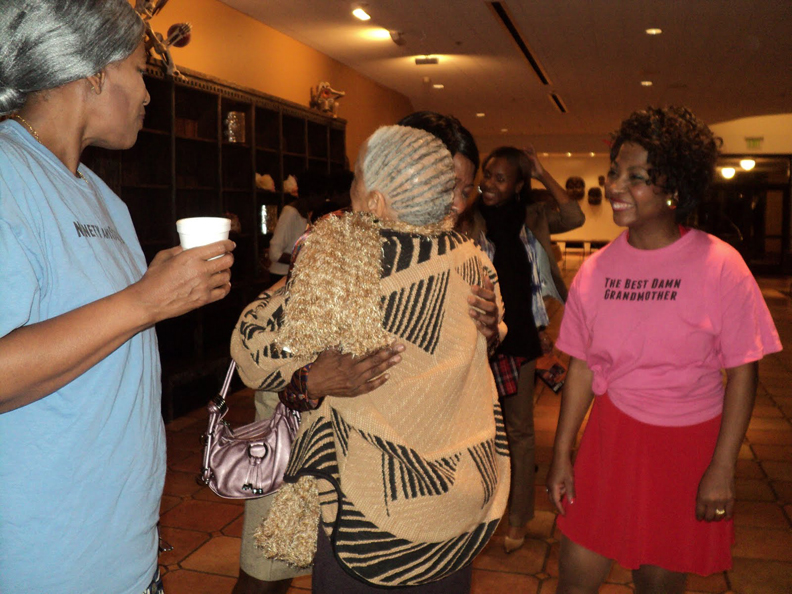 After the performance, I took photos of cast and others connected to the performance, friends and family and mentors, like Ms. Vachye Hardeman, whom Sharon Moore, MaDear, said inspired her in her character development.

Pictured are C. Kelly Wright, Sharon Moore, Ms. Hardeman, with cast and with her friends, Gloria Alexander and Eunice Portwood. I also took a photo of Ms. Whye and Professor Darryl Jones, who is the director of Musical Theatre at Cal State East Bay. He filled me in with wonderful background information about the play and playwright, who was a literary toast of the town in the ‘60s and ‘70s, known for “Puddin n’ Pete,” “Before It Hits Home,” which earned the writer the 1992 Helen Hayes Charles MacArthur Award for outstanding play and the 1990 Susan Smith Blackburn Prize. Another play was adapted for screen, “Holiday Heart.”

I also took a photo of Cheryl B. Scales, jazz vocalist, actress and, for this production, assistant stage manager. I remembered her from Cultural Odyssey’s production of August Wilson’s “Women,” a tribute piece Rhodessa Jones wrote when Wilson passed. I have also seen her in the Medea Project Theatre for Incarcerated Women’s “My Life in the Concrete Jungle.” You can see her next week as a part of Maiko Women’s Drum & Poetry Ensemble’s 10th Girlfriend Appreciation Day, Saturday, March 19, at the Mexican Heritage Plaza Pavilion, 1700 Alum Rock Ave., San Jose, 11 a.m. to 3 p.m. For tickets, call (408) 272-9924 or go online to www.acteva.com/go.sjmag. 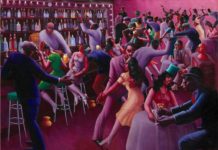 West Coast Premiere of ‘Jazz,’ based on Toni Morrison’s book, Marcus Shelby’s score, at Marin Theater Company through May 19

‘The Scottsboro Boys,’ a review

Wanda’s Picks for May 15