One of the least spoken about works, Morrison’s “Jazz” is a migration story, not a grand sweeping victory dance, rather an intimate tale of betrayal and suffering. “Jazz” asks the question: What happens to a girl who finds her mother’s twisted body in a well? What happens to a boy whose mother is seen running wild in the woods? For both girl and boy, fathers are lost. All the two have are stories or songs of their disappearances. When they meet one day in the field, the boy falling almost on the girl from a tree where he waits for his mother, they find in each other kinship, canvas to cover the holes in stories filled with ellipses marks – soothing lullabies grannies sing them to sleep.

When Violet (actress C. Kelly Wright) says she is leaving, her granny gives her a formula to kill any babies her body might conceive – castor oil, soap and salt. It becomes a bloody ritual, a pact she maintains to keep the ghosts at bay. Silently she bears all responsibility for conception, gritting her teeth and smiling to hide the pain, loss. Her husband gives her a bird, Parrot, excellently portrayed by actress Paige Mayas, to fill in silences – wails of babies smothered each month until Violet’s fertile soul breathes its last breath, says enough.

This story needs a chorus – a duet can hold only so much so there are the neighbors, nappy heads Violet has pressed, customers her husband, Joe, has serviced with his sample case.

“Jazz” is a story of betrayal and infidelity – a girl whose parents are killed in the riots; as she watches the fires burn, her innocence is also stripped bare. New skin silences. Her Auntie Alice (actress Margo Hall) cautions the girl to not let the music play her body, don’t give vent to sorrow best swallowed without processing. Don’t grieve. Let the dead lie bury even those unburied, she tells Dorcus, who remains unsettled. If the characters – Dorcus (actress Dezi Soléy), Violet and Joe Trace (actor Michael Gene Sullivan) – had been able to hear if not play the changes, perhaps a child might have been allowed to breathe … Dorcus, the child who came too late.

There is so much symbolism here. Cotton bolls surround the virgin casket or bridal bed. Mourners offer their condolences while Violet, carrying a knife, cuts her rival’s face.

“Jazz” is a dirge or funeral march retold in a series of flashbacks. Reset – characters crisscross remembered terrain; however, the trauma remains unresolved as Violet visits the dead girl’s aunt. “Just let me sit,” she asks. Alice Manfred (Margo Hall) tells her to go away, but Violet will not go away. Who shot the girl and why?

Violet’s Sankofa journey sits at the intersection of peace and chaos, Parrot her talisman. All any of the three stoic fixtures know for sure is their mothers and fathers are lost. Abandoned in death or insanity – Joe Trace, Violet and Dorcus cannot make sense of the winding cloth that binds each one of them to cooling boards – one tragic song that is Black life – but they try.

When Violet’s Joe leaves her for Dorcus, she tries across a series of missteps to know the dead girl, for Dorcus is her child, her life in a Diaspora filled with such black femme fatales. To move from home to a place like New York, foreign yet equally hostile and toxic, meant that something had to die. There were parts of themselves Black migrants had to amputate, kill, suffocate to bear the insults, daily slights – both spiritual and economic – to their humanity. Such toxicity poisoned loving relationships. Joe lost temporarily, almost permanently all “traces” of the boy who fell into Violet’s loving lap. Eventually there was only silence.

Violet became mute. What happens in a relationship silenced?

When, after Joe’s five year investment toiling and making a crop, the bank takes the couple’s land to build a railroad or highway, he convinces Violet to leave the country for the unknown world of Harlem. The way he describes it is as a heavenly dream – it is not. However, Joe and Violet are stuck. There is nowhere else to go, so the two get used to hearing caged birds sing, a literary metaphor personified.

Like their ancestors, this journey was not anticipated or desired. When the protagonists meet, the two speak of how much they despise the city and never want to leave home for a place where people live stacked on top one another and never see the sun, feel dirt or grow food.

The playwright is skillful at creating auteurs, this bird is one of them – the parrot tells Violet she loves her. It becomes the surrogate child she has refused to birth. The bird knows Joe’s secrets, but she doesn’t tell Violet. Its beautiful voice fills in story where silences in the music the couple play is a clanging cacophony, dissonance normalized as Dorcus’s dead body and absent killer haunt the proceedings. Dorcus’s face looks at Violet from her apartment wall where she presides. Who would hang the photo of the woman-child who seduced your husband? Is Violet crazy? Yes, crazy for Joe, so crazy about Joe, Violet has to interrogate the dead girl and her aunt and all who knew her. What is the back story? How is learning more about Dorcus key to Violet’s untying the taut restraints choking her relationship with Joe?

“Jazz” is an American story. It is the story of Black people’s duress and pain capitalized, monetized by a government which politically or economically never saw Black people as free. When director Jordan Peele’s Rod Williams (Lil Rel Howery) tells his friend Chris Washington (Daniel Kaluuya) to “get out!” “Jazz” answers. Kelley’s adaptation of Morrison’s “Jazz” says escape is only through death, a daily ritual application of poison Violet carries in her purse. Her grandmother gives it to her. It is the only way her foremothers know to survive. Orphaned, it is all she and Joe – let’s extrapolate and say, a people know. What Black people do not know, “Jazz” says, does kill them. There is no way to undo death, so what is the message of survival here?

Violet ritually keeps pulling bloody rags from between her legs. Is the blood the rapes, unwanted children and children taken at birth when Black bodies were not our own? Is this the fear that stalks Joe and Violet that has them say, as if on cue, “No children!” when Joe falls into Violet’s lap? Do the two youth feel that scarred they do not have capacity for life, so to terminate it with their personal finale is grace? How does Violet mourn the couple’s loss? How do Black people stop the ritual death march? How do we save this marriage and the symbolic Christ child – Dorcus? Is this possible? What instrument does Violet need to carry in her purse to straighten this out?

And so Nambi E. Kelley’s adaptation of Toni Morrison’s “Jazz” begins with a rhetorical question – the musical motif a way to excavate a terrain covered in diseased pock marks. “Jazz” ultimately is an opportunity to unpack the luggage we have collectively stored in too many attics in the north, west, east and beyond 400 years after Ft. Comfort. “Jazz” takes us places only such a composition is capable – there is no intermission. Once seated, buckle up and while you won’t enjoy the ride, Sankofa (the return) is a necessity for freedom. Let Esu Legba lead the way. Watch the bird (actress Paige Mayes), listen to her song.

In an excellent production, directed by Awoye Timpo with music by Marcus Shelby, the play, in its second iteration, is up at Marin Theatre Company, which also produced Nambi E. Kelley’s “Native Son.” The cast is of course excellent with outstanding performances by all, especially C. Kelly Wright as Violet, Michael Gene Sullivan as Joe Trace, Dezi Soléy as Dorcus/Wild, and Paige Mayes as Parrot/Golden Gray. Joanna Haigood’s choreography, Marcus Shelby’s score, the set design and costumes and lighting, sound and all of the artistic elements that make a production speak well the intentions of playwright and director are superb as well.

The show is up at the Mill Valley site, 397 Miller Ave. Tuesdays through Sundays through Malcolm X’s birthday, May 19. Visit marintheatre.org or call 415-388-5208. There will be special matinees with preview discussions on Sunday afternoons at 4 p.m. 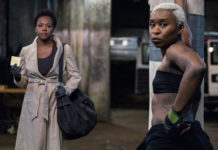 ‘Widows’ isn’t making much money at the box office. What’s wrong with you, America?

‘The Scottsboro Boys,’ a review