by Brent Walker with Max Cadji 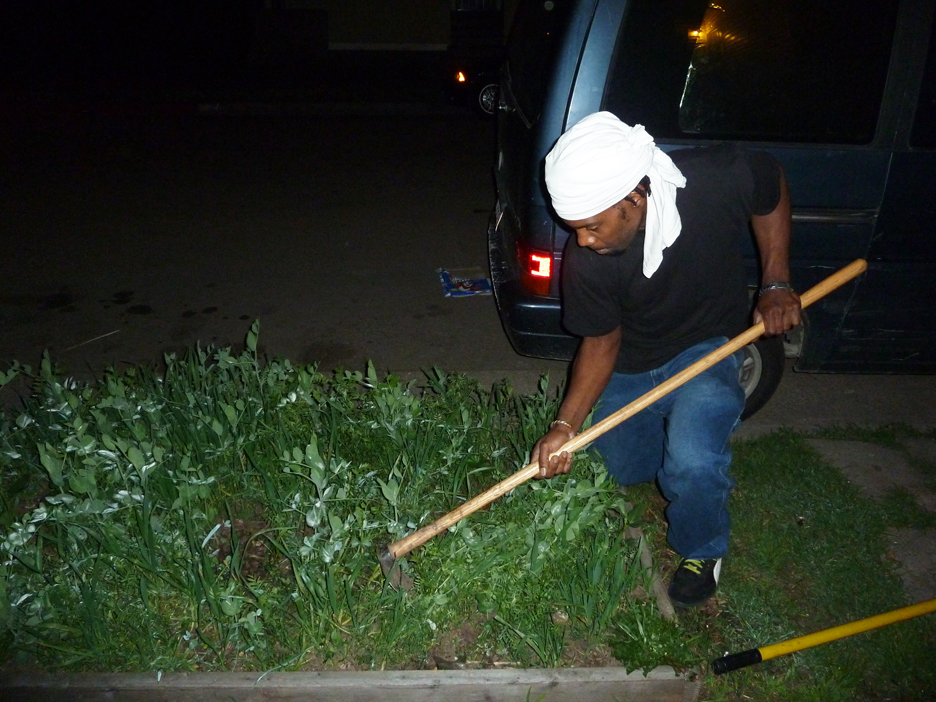 Will Scott Jr. is one of the founding farmers of the West Oakland Farmers’ Market and a contributor to the North Oakland Farmers’ Market, as well as Phat Beets Produce’s “Beet Box” CSA. He is a farmer for the everyday man. Mr. Scott is president of the California Branch of the African-American Farmers Association and owner of Scott’s Family Farm.

He told me all about his 40-acre farm in Fresno, his move from Oklahoma “way back when,” and the Black-owned restaurants he sells to in the Bay Area: Guerilla Cafe and Farmer Brown. When we spoke, I was struck by the truth of his statement, “We (African-American farmers) are a dying breed.” In fact, in 1910 there were over 1 million African-American farmers, and today there are fewer than 17,000.

We look back to see why there are so few African-Americans farming the land. Our nation’s wealth was built on agriculture, particularly “King” cotton, using African-American slave labor, and though we tilled and cultivated the land, there was little or no ownership.

Then, on Jan. 16, 1865, upon completing the Union Army’s “March to the Sea” to defeat the Confederacy in the Civil War, Gen. William T. Sherman issued Special Field Orders 15. These orders instructed that about 18,000 freed slave families were to be given 40 acres of land for cultivation and a mule on 400,000 acres of arable land in Georgia and South Carolina. Forty acres was seen as an “ideal” family farm and a means of giving some power and economic self-determination to the freed slaves on the land of former Southern slave owners.

On April 16, 1865, President Lincoln was assassinated and his successor, Andrew Johnson, became the 17th president of the United States. President Johnson overturned the order and returned this land to its former white owners, destroying many hopes for freed slaves’ economic self-determination. The term “40 acres and a mule” has come to represent the failure of the U.S. to pay and support reparations to the 3.5 million Black people formerly enslaved in the South.

Fast-forward to over 150 years later, and most Black folks now live in urban areas surrounded by concrete. African-Americans still have little or no arable land. In the 21st century, gentrification and urban development have left many African-American communities in “food deserts.” A food desert is defined as an area or neighborhood, often low-income, in which residents have no immediate access to grocery stores or fresh food retailers.

Now, an emerging movement is sweeping across urban areas, from West Oakland to Detroit, Milwaukee and Chicago to the Bronx and beyond. It is an urban agriculture movement, a call to reclaim post-industrial abandoned lots, under-serviced public parks and vacant lots to grow fresh food for the people. The term “food justice” is often given to this movement, representing the idea that healthy food for our people is a human right, not a privilege.

Further, food justice means that in order to “turn the tide,” our communities must take control over own economic development and be present at the table.

My name is Brent Walker. I’m a 31-year-old Black farmer, originally from Memphis, Tennessee. I’ve been farming and living in the East Bay for three years. Farming has been part of my life since childhood.

My grandmother, the first small farmer I knew, made me participate in all her day-to-day chores. I didn’t understand the chores or why my grandmother farmed and did not just go to the grocery store. As I got older and moved far away from farming, it started to make more sense.

Farming is hard work! It also can be the most rewarding kind of work. Having witnessed the cycles of small farming, I realized that farming brings together families and communities for the common cause of nourishment. This has been part of our culture for thousands of years and will always be a way to connect people.

Having had the opportunity to be educated at the Center for Agroecology and Sustainable Food Systems, I learned time-tested techniques of sustainable, organic farming. The center was also dedicated to food justice. Upon graduation, I began to manage a 3.5-acre farm for People’s Grocery, a non-profit organization whose mission centers on food justice.

Each of the farms that I worked on used a similar model: All the farms were organic and grew food outside of an urban area, which was then harvested and transported back to the city for sale. Community-Supported Agriculture boxes (CSAs) and farmers’ markets were the main retail outlets. With CSAs, the community supports farmers by paying their production costs upfront, in the form of a subscription for a weekly share of the harvest.

This model ensures that those families who can afford it eat healthy during the growing season, while relieving some of the farmers’ risks. The problem is that the food often doesn’t reach the communities that need it the most – those in food deserts with limited economic resources. This is what I am working on and what we are calling for!

Urban farming has become a way to help bring life back to post-industrial, neglected areas in Oakland and other cities throughout the U.S. Farms and gardens are planted on vacant lots and abandoned land near residential areas. This model has been proven to be efficient and effective, giving communities a sense of pride in the fresh food they produce.

Many organizations are helping to revitalize communities through urban farming – People’s Grocery, Oakland Food Connection, City Slicker Farms, Phat Beets Produce – just to name a few. These organizations have motivated me to stay involved by starting an urban farm in my West Oakland neighborhood. Growing produce in backyards throughout the East Bay will help support small urban farmers, while making fresh produce more accessible to our often-marginalized communities. We support consumers as well as farmers.

We are calling on those who have large backyards, who own abandoned lots, or who know of arable land in the East Bay to connect with us: Put the land back in the hands of farmers. We are calling for community partners to help spread the word: This project is not grant-funded; there are no strings or puppeteers.

Put the land back in the hands of farmers.

We are looking for land to intensively farm throughout the East Bay. If you have or know about available land between 4,000 square feet and 2 acres, please join our movement. Please call me, Brent Walker, at (510) 418-5270 or email max@phatbeetsproduce.org. If we can’t get our 40 acres and a mule, we’ll settle on 2 acres and some urban goats!