In 1988, when I was 10 years old, I had my first run-in with the police. It was in an apartment complex I lived in in Alameda known as the Buena Vista apartments aka the BVs. I got caught with $200 in illegal fireworks: bottle rockets, firecrackers, flowers, roman candles and M-80s. I was hustling them to other pre-teens and teens in the area, right before the 4th of July.

My supplier was a Filipino guy about eight or nine years older than me named Mike Dream, who lived on the other side of the apartment complex. Since he was Asian, he could buy illegal fireworks in Oakland Chinatown legally and then resell them.

Years earlier my family had met Mike, after his brother Lil John and his crew used to breakdance in front of my patio with radios and linoleum. My mother and her new husband would spend anywhere from $500 to $1,000 with Mike a week.

After getting the fireworks in Alameda, they would resell them for a profit on the streets of East Oakland to my uncles who, at the time, were drug dealers. That is the story of how I came to know Mike Dream, the legendary TDK Bay Area graf artist, who was also affiliated with the legendary Hobo Junction Hip Hop crew.

In ‘99-2000, I saw Mike at an event at the Malonga Center in downtown Oakland. By this time he was already a legend on the Bay Area graf scene. David Johnson of the San Quentin 6 tried to introduce us, not knowing that at that point we had known each other for well over a decade and a half.

Mike Dream told me that he was happy to see me getting political. At the event, we vowed to hook up. I later heard that he was shot dead on a street in West Oakland.

Filmmaker Pendarvis Harshaw was a teenager when I met him on his way to Howard University. Years earlier I had mentored his running buddy Jesus El and talked extensively to both of them about the need for Black journalists. Pendarvis took the info and ran with it, eventually graduating with a master’s degree in journalism from UC Berkeley.

Check out Pendarvis Harshaw in his own words as he talks about Mike Dream, TDK and “The Dream Kontinues” documentary.

M.O.I. JR: What made you want to do a documentary about the legendary Bay Area graf artist Mike Dream?

Pendarvis: My movie opens with a shot of the old Menlo Hotel, a spot on 13th and Webster in downtown Oakland. That’s where I used to live.

On the side of the building, there was a small mural on some plywood. I simply wanted to know the story behind it. I wanted to know who did it, why they did it and what it meant – and how graffiti was viewed by people in Oakland. And I got mixed reviews: To some people, it’s an eyesore. To others, it’s a sight for sore eyes.

M.O.I. JR: Who is Mike Dream to the local region? 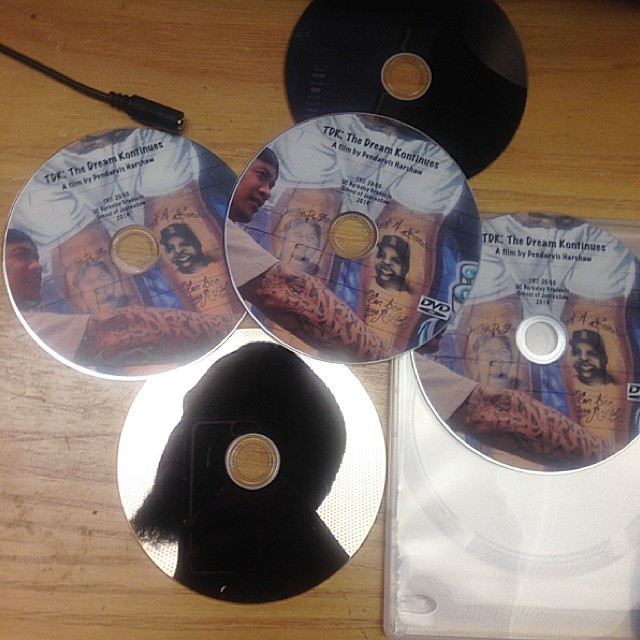 Pendarvis: Mike “Dream” Francisco is one of the first internationally known muralists from Oakland. He was one of the founding members of TDK; a group that started off as some high school trouble makers and grew into a posse that still paints to this day – now they paint legal, commissioned murals. They started off as Those Damn Kids; now they represent the dream kontinuing.

Pendarvis: What happened? I guess you’re talking about his death, right? Well, after Mike Dream made his name on the walls of a train yard over near 23rd Ave in East Oakland – after he had tasted stardom – he was featured in magazines and traveled on the strength of his art.

Mike Dream was killed in what has been reported as a robbery. It happened in West Oakland. He was 30.

His son had just been born months earlier, too. Today, his son is a high school football playing-skateboarding-cool kid who is also a member of TDK; you know he represents the dream kontinuing.

M.O.I. JR: What exactly does “TDK: The Dream Kontinues” analyze?

Pendarvis: Before we get to the story of Mike Dream and TDK, the film starts off by analyzing the cat and mouse relationship between graffiti artists, or “writers” as they call themselves, and City abatement workers. Without graffiti removal efforts of the City, the young taggers wouldn’t have a fresh canvas to test their skills in hopes of growing to the status of a top artist with a name that rings bells in certain circles, like King Fresh, Vogue or Dream – all of whom are referenced in the film.

M.O.I. JR: How has the community that knew Dream responded?

Pendarvis: It’s been cool to see. I’ve met Asian folks from Alameda who knew Dream back in the day, and they’ve thanked me for making the film about their old friend. I’ve also shown it to my older homie, Black dude from Richmond, and he was brought back to his days as a kid – when he got his shirts airbrushed by Dream at Hilltop.

I showed it to my teacher who didn’t know him at all, and she was fascinated – ended up writing an article about it in National Geographic. And most importantly, TDK has given me good feedback. There are a couple of notes I left out and things I glazed over, but you can only fit so much in a 20-minute film.

M.O.I. JR: How has his graf family TDK responded?

Pendarvis: Again, TDK has shown nothing but love. John, Dream’s brother, has been the coolest. Akil, Dream’s son – I’ve been to one of his football games. I stay in contact with a couple members of the crew now – shout out to Spie, Amend and the crew over at Five & Dime Tattoo parlor.

M.O.I. JR: How does it feel to be accepted into the Oakland International Film Fest?

Pendarvis: It feels good. It’s my first screening at a film festival. I’ve held a couple smaller community screenings, but this will be the biggest audience. I’m hoping that they’ll enjoy my thesis project as much as my professor did; at least this time I’m not nervous – I don’t have a degree on the line, just praise from the film fest folks. Being accepted is praise in itself.

“TDK: The Dream Kontinues” will screen in the Oakland International Film Fest on opening night, Thursday, April 2, ’15, at the Grand Lake Theater in Oakland between 7:30 and 9:30 p.m. It will also run earlier that day, at 12-2 p.m. at the Bal Theater in San Leandro. Check oiff.org for more information.