This is the story of the enduring and ineffable bond between a homeless mother and her homeless child and of their noble struggle to survive in a harsh and unforgiving world.

Tiny was 11 when Mama Dee lost her job. Mama Dee’s mental breakdown that followed happened so fast. One moment she was standing there, remarkably functional. Then the next moment, she just gave up. Mama Dee Dee’s problem was that she couldn’t calm the insecurities, couldn’t stop the flashbacks, couldn’t keep the walls from closing in on her. There in the haunting was the reality of Mama Dee’s foster home: the muffled silences, the muted anger and the unbearable searing pain of an innocent child.

The school didn’t like her being homeless, so Tiny dropped out of the sixth grade to avoid the inevitability of ending up in foster care like Mama Dee. “I was home-schooled in the Skool of Hard Knocks,” she liked to say. There is truth to this.

Tiny is living proof that schools are not the only place a person can obtain an education. Having spent nearly all her developing years on the margins of society and approaching the world as an open book – soaking in knowledge and life lessons – Tiny is thus absolutely original, unconventional, totally street and totally hip.

The rest of us ordinary folk attend the same schools as our neighbors. We study the same subjects, read the same textbooks. We are taught uniformly how to add, how to spell, how to write, how to think. We are taught the same versions of White American and White European histories. It is instilled in us from an early age to blend in.

Tiny is living proof that schools are not the only place a person can obtain an education.

For all of those who are unable to see the faces of the homeless and instead see only the social ills they sometimes bring with them, I implore you to close your eyes and see Tiny’s face: Imagine her as a young girl; imagine her all grown. Homeless people are humans. Humans have rights.

The policing and pushout of the homeless from American cities

During the 1980s and 1990s, anti-homeless sentiment swept through the nation. City officials everywhere responded to public demand for punitive measures to combat homelessness because the visibility of homelessness drove down real estate values, was bad for business and disturbed the aesthetics of neighborhoods.

The needs of well-to-do communities all across the nation prevailed over the needs of the extreme poor. Thus, America set out to cleanse its cities of those deemed undesirable and undeserving by adopting citywide Quality of Life laws that severely restricted homeless access to public spaces and criminalized nearly all behaviors essential to survival on the streets.

It was in 1994, the same year Tiny turned 18, that the trend in anti-homeless policies caught up with Tiny and Mama Dee. The onset of the dot-com boom ushered millionaires into the Bay Area like ants to a mound of sugar. Tiny and Mama Dee called it the dot-festation.

Dot-comers had money. Homeless people didn’t. Dot-comers wanted the city to look pretty. Homeless are ugly. Poverty is ugly. In the eyes of some, the poor are the stench of dried urine and garbage and greasy matted hair. Quality of life laws were an attempt to eradicate that stench, to exterminate homeless vermin, to torture, intimidate, terrorize, enact vengeance upon the extreme poor.

The onset of the dot-com boom ushered millionaires into the Bay Area like ants to a mound of sugar. Tiny and Mama Dee called it the dot-festation.

Before the quality-of-life annihilation of Tiny and Mama Dee’s way of life, things were going OK. The utter brutality of daily living had become bearable. Sometimes Tiny and Mama Dee earned enough money selling t-shirts to rent a hotel room.

It was the showers Tiny and Mama Dee coveted the most. There was nothing more luxurious than washing a filthy body off in a nice hot shower, sweet silky streams of endless water. Tiny devoured those showers with all her senses: listening to the cascade of water droplets and imagining herself naked in a heavy rainstorm in the middle of the forest, watching as the dirt trailed down her leg, onto the tub, and then down the drain, feeling the water droplets land on her back like a thousand miniature hands giving her a massage. Tiny and Mama Dee took the longest showers, they would stay until the water ran cold and then even longer after that, until their bones caught a chill from the inside and their shriveled skin resembled the skins of 90-year-old men.

There was this feeling that wouldn’t go away, this feeling that nothing in the world belonged to Tiny and Mama Dee. Tiny’s insides were coming undone, her flesh pressing dangerously against her skin, the attempted escape of spirit and soul through the pores. Mama Dee’s hair had turned totally white, and gone absolutely wild. Mama Dee’s demons grew bolder, haunted her harder than ever.

One chilly winter night, Tiny was driving while poor. Expired registration. Car rusted and bursting at the seams. A cop pulled her over. His face remains in her memory a blur, his voice evocative of sirens and static. Tiny saw the uniform. Tiny saw his gun in its holster. Tiny heard his voice, felt the law-and-order urgency of the moment. Everything happened in slow-motion. He wanted to see her driver’s license. Tiny did not have one.

You ever feel an aura that something bad is going to happen, right before it happens? Like an epileptic sense right before a seizure? That was the fear that jumped up and grabbed Tiny in the throat like a parasitic twin reaching up from her gut. That feeling she felt just as blurry-face cop slammed her against the car, putting handcuffs on her and squashing her face with the palm of his hand.

It was the first time Tiny had ever been cuffed, and the cold metal may as well have been kryptonite. She melted beneath its power. She had lost all control of the moment and of her life and of Mama Dee’s life. She was 11 years old once again, newly homeless on the street living in Mama Dee’s car. It was the same terror she felt then at 11, the terror she hid from the world.

The ride to the police station may as well have been the road to hell. If growing up homeless on the streets with nothing was rock bottom, then Tiny had just fallen into a moldy well that plunged deep below the depths of the earth. And she would remain at the bottom of that well for the 90 days while she awaited trial. Tiny’s bail had been set at $5,000. So damn high it was a joke.

Each day Tiny suffered behind bars she understood more and more how Mama Dee felt when the walls caved in on her. Tiny was not a free woman, not even on the outside. Tiny and Mama Dee won’t ever be free. The only way to be free in this country is to own or rent property and to have sock-drawer money for emergencies. Sock-drawer money to pay bail. Sock-drawer money to buy a ticket to the moon and be done with this wretched place.

At her trial, the judge found Tiny guilty and ordered her to pay more fines.

The criminalization of poverty

Chesa Boudin’s victory in the San Francisco district attorney race was widely covered by the national media because of his family background and progressive agenda and has brought into center stage issues such as quality of life laws. The Wall Street Journal, Fox News and the Daily Caller have slammed Boudin – and San Francisco in general – for his compassionate and economical position on quality of life crimes, pointing to homelessness as being caused by urban decay and social ills rather than being the root of them. In line with his predecessor’s policies, Boudin will instead focus resources on investigating and prosecuting serious and violent crimes, rather than tying up public funds investigating and trying crimes that have little impact on public safety.

Jennifer Friedenbach, executive director at the Coalition on Homelessness in San Francisco, shares her viewpoint: “The structural causes of homelessness will never be solved by criminalizing people simply for being too poor to afford a place to live. In fact, this practice makes it more difficult for homeless people to exit the streets by wasting valuable resources moving people around, destroying credit for unpaid citations, and giving warrants which make many ineligible for government funded housing.

“While San Francisco has halted the practice of issuing warrants, it is still alive and well all over the country. We still spend millions moving people from place to place, issuing citations and confiscating people’s most precious possessions and survival gear. These incredibly inhumane and ineffective responses must stop. Instead, we need housing and safe places for people to exist until that housing opens up.”

Jennifer Friedenbach, executive director at the Coalition on Homelessness in San Francisco

The bottom line is that criminalizing poverty and homelessness is costly and does nothing to change the fact that the poor have little or no money and the fact that the homeless have no housing. Moreover, there is the dehumanizing aspect of persecuting an entire class of people and criminalizing their very existence and survival. Homeless people are human. Humans have rights.

Lisa ‘Tiny’ Gray Garcia and the uprising of the poor

Lisa “Tiny” Gray Garcia went on to publish a memoir, “Criminal of Poverty: Growing up Homeless in America,” and to launch the homeless and indigenous led movement known as POOR Magazine/ Prensa Pobre which offers their own solution to homelessness, called the Homefulness Project. The Homefulness Project is a co-housing project built by poor people without the assistance of government or charitable agencies, led by poor people and for poor people. To find out more, visit Tiny’s website: https://www.lisatinygraygarcia.com/.

Michelle Chan is a writer, activist and founder of California Families Rise, formerly Parents Against CPS Corruption. To learn more about her cause, visit www.CaliforniaFamiliesRise.com or www.ParentsAgainstCPSCorruption. She is interested in hearing from people who have been criminalized by poverty and impacted by the child protection and criminal justice systems. She can be reached at mchan46@outlook.com. 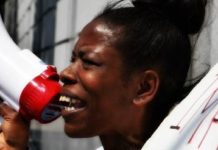 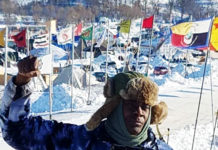 We are all connected, from Standing Rock to Oakland