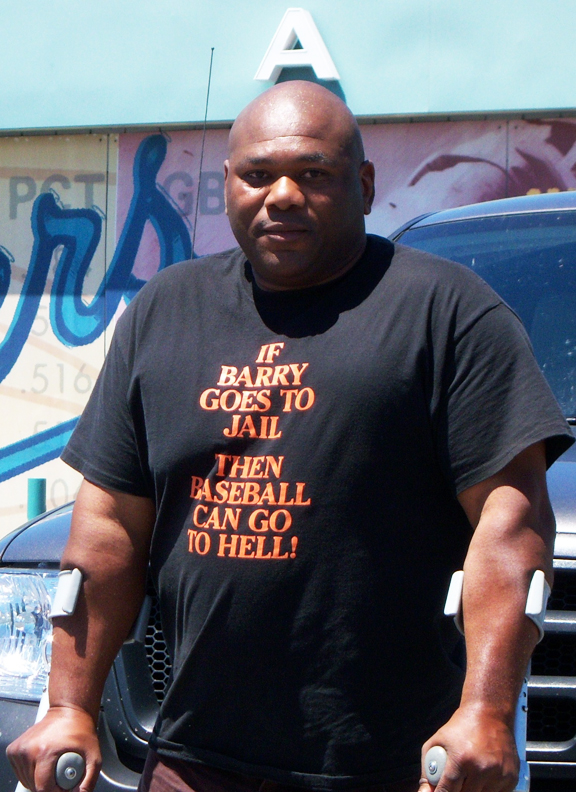 My T-shirt reads, “If Barry goes to jail, then baseball can go to hell!” The ax I have to grind against Major League Baseball goes way beyond the recent years surrounded by baseball’s “steroid era” and fan claims of “cheaters!” It is a matter of, who you callin’ a “cheater,” cheater (MLB)?

Technically, the fans are doing all the name-calling but, as time goes on, owners of Major League Baseball teams and their commissioner will be forced to punish certain players to protect the bottom line. To the owners, that bottom line would be profit, concealed in an envelope marked “Integrity of the Game.”

Technically, if Barry Bonds is convicted of lying to a federal grand jury, he could face prison time, not jail. However, there is another trial going on at the same time and the jury has already been seated.

The integrity of American baseball cannot be associated with the words cheater, liar or racism if it is to maintain its national pastime status. However, an all-Black jury is seated to determine if Major League Baseball is guilty of running a profit-then-deny scheme by a bunch of lying, cheating racist ringleaders.

The evidence presented at trial includes the fact that many Blacks are choosing other sports over baseball, as mentioned in this 2007 ABC News interview where Hall of Famer Dave Winfield admits he is at a loss to figure out why. In addition, Major League Baseball will be drilled by more damning evidence:

A pattern of racism: The defendants will be asked to explain the term “The Honus Wagner Rule” and explain why from 1899 to 1947 blacks were not even allowed to play in the Majors, simply because of the color of their skin.

A pattern of lying: The defendants will be asked to explain why April 15 of every year has been decreed by current Commissioner Bud Selig as “Jackie Robinson Day” to commemorate the day Jackie Robinson “broke the color barrier,” as the media claim, when in fact he did not. To break something takes force and Robinson was allowed to play in the Majors – with conditions – only after the in-office death of Judge Kenesaw M. Landis, who was the first commissioner of Major League Baseball, hired right after the 1919 Black Sox scandal, and served from 1920 to 1944.

A pattern of cheating: The defendants will be asked to explain why baseball failed to act this time, when it knew how to punish cheaters like Chick Gandil, the ringleader, and seven others by banning them for life as a result of the 1919 “Chicago Black Sox Scandal.” More recently, a lifetime ban was imposed on Pete Rose, who admitted to breaking baseball rules and has received no mercy. However, in between these notable scandals, Judge Landis served 24 years and has been hailed as a great and strong commissioner, while cheating Blacks out of even the opportunity to play in the Majors his entire time in office.

Now, the job of punishment is handed over to the federal government. Despite the fact that the taxpayer waste outweighs the possible punishment, federal prosecutors are willing to use a “money is no object” pursuit over eight years to punish a man for allegedly lying as if the crime was treason.

Profit and deny has always been the modus operandi of greedy and self-serving corporate America. However, in the case of the United States of America versus Barry Lamar Bonds, conspicuously absent are 31 people who should have known what was in the San Francisco Giants locker room. According to this October 2010 Bloomberg Businessweek article, there are 31 owners that make up the San Francisco Giants ownership group and all were so busy counting money, none noticed the elephant in the room.

Therefore, to testify on why Barry Bonds needed a truck scale to be weighed due to his sudden weight gain will be reluctant former teammates under pressure by the feds. The groundskeeper will handle testifying on how Bonds was strong enough to carry, not drive, his Bentley out to left field. Testifying on how Bonds was able to wrestle gorillas from the city zoo into screaming “Uncle” will be scorned lovers.

The prosecution could not find anyone other than a clubhouse manager to testify that Bonds has a big head. They even rejected the fact that hitting 762 home runs could easily explain the need for a larger hat.

Fans who find it hard to believe Barry Bonds when he says he did not “knowingly” take steroids should plead the fifth rather than side with the owners, who also deny knowing steroids were in baseball. Moreover, the fact that not one owner of any major league team offered to or was forced to testify under oath to the federal government concerning steroid use speaks for itself.

The jury has ruled that Major League Baseball is guilty of being run by nothing more than a bunch of lying, cheating racists. They have cheated Blacks out of playing the game for nearly 50 years and now have the nerve to use Jackie Robinson or Barry Bonds for the next 50 years and counting as they see fit. As punishment, future Black athletes would rather pay higher taxes than wear any baseball uniform on April 15, “Jackie Robinson Day.”

Once there are no more Blacks playing the game of baseball, Major League Baseball can have an attitude of “We did it before and we can do it again,” according to the history of the game in America.

However, if they think President Barack Obama, who really did break a color barrier, might grant Major League Baseball a presidential pardon, I would say they are pressing their luck.

San Francisco writer Allen Jones, author of “Case Game: Activating the Activist,” can be reached at (415) 756-7733 or jones-allen@att.net. Visit his website, at http://casegame.squarespace.com. Last November, the Bay View published his story, “Wanted! Black leaders for California prisoner release court order,” which is followed by an autobiographical note. 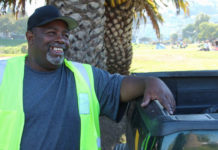