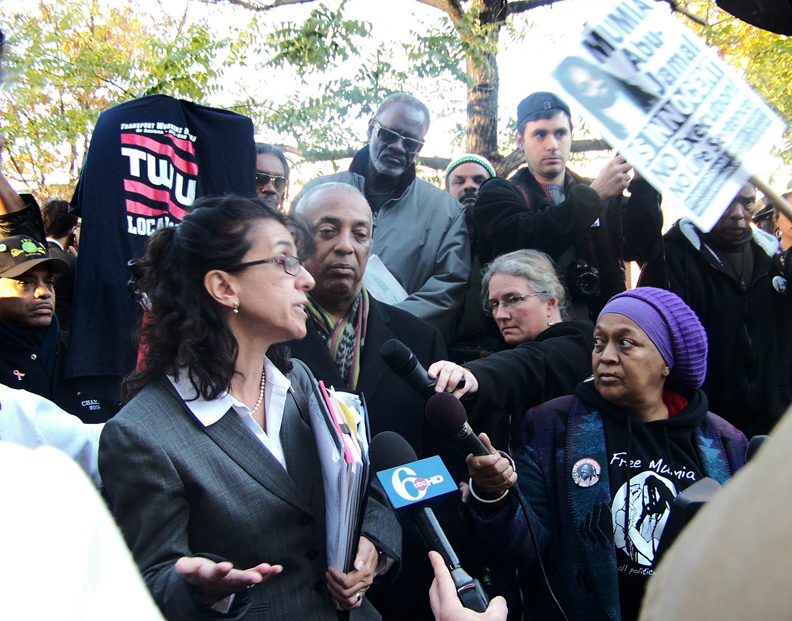 April 26 – The federal 3rd Circuit Court of Appeals in Philadelphia, in a stunning smack at the U.S. Supreme Court, has issued a ruling upholding its earlier decision backing a new sentencing hearing in the controversial case of Mumia Abu-Jamal, convicted of killing Philadelphia Police Officer Daniel Faulkner.

The latest ruling, issued on Tuesday, April 26, 2011, upholds a ruling the 3rd Circuit issued over two years ago siding with a federal district court judge who, back in 2001, had set aside Abu-Jamal’s death penalty after determining that death penalty instructions provided to the jury and a flawed jury ballot document used during Abu-Jamal’s 1982 trial had been unclear.

The U.S. Supreme Court had ordered the 3rd Circuit to re-examine its 2009 ruling upholding the lifting of Abu-Jamal’s death sentence.

The nation’s top court had cited a new legal precedent in that directive to the 3rd Circuit, a strange order given the fact that the Supreme Court had earlier consistently declined to apply its own precedents to Abu-Jamal’s case.

The Associated Press was the first to report the 3rd Circuit’s latest dramatic ruling and, in fact, as of the morning of the ruling’s release, the decision had still not been posted on the appeals court’s website.

Abu-Jamal’s current lead attorney, Professor Judith Ritter of the Widener Law School, could not be reached for comment.

The 3rd Circuit’s ruling, if left standing, requires Philadelphia prosecutors to call for a whole new sentencing hearing if they want to try and reinstate the death penalty. That would require the impaneling of a whole new jury to hear and consider evidence regarding mitigating circumstances and aggravating circumstances in the case, and then to decide for either execution or life without possibility of parole – the only two options legally available. Abu-Jamal has exhausted his avenues of appeal of his conviction, absent new evidence in the case.

If prosecutors opted against holding a new hearing, then Abu-Jamal’s sentence would be converted automatically to a life sentence, which in Pennsylvania means no chance of parole. Abu-Jamal would have to spend the remainder of his life behind bars, though not on death row.

Experts contend a new sentencing hearing would be problematic for prosecutors. Although the issue of guilt or innocence would not be on trial, the defense could bring in witnesses to explain exactly what they saw happen the night of the shooting – witnesses whose testimony could ultimately raise new questions about the validity of the underlying conviction.

It is almost a certainty that prosecutors will appeal the 3rd Circuit’s latest ruling back up to the Supreme Court. Furthermore, prosecutors concede that current and yet unresolved legal issues in this case, which continues to attract unprecedented international scrutiny, will keep it in courts for years. For example, there are several avenues of appeal of Abu-Jamal’s death sentence which were never adjudicated by the federal district court, which mooted them after the judge, William Yohn, found in favor of one argument and tossed out the death sentence.

In early April 2011, the NAACP Legal Defense Fund publicly announced it was joining the Abu-Jamal defense team and working with Professor Ritter. NAACP lawyers had joined Ritter last fall during the hearing where she argued the legal point just upheld by the 3rd Circuit in its latest ruling.

Two days ago, on April 24, Abu-Jamal recorded yet another birthday inside a death row isolation cell. Abu-Jamal and the 222 other Pennsylvania death row inmates spend 23 hours per day every day isolated inside minimalist cells. 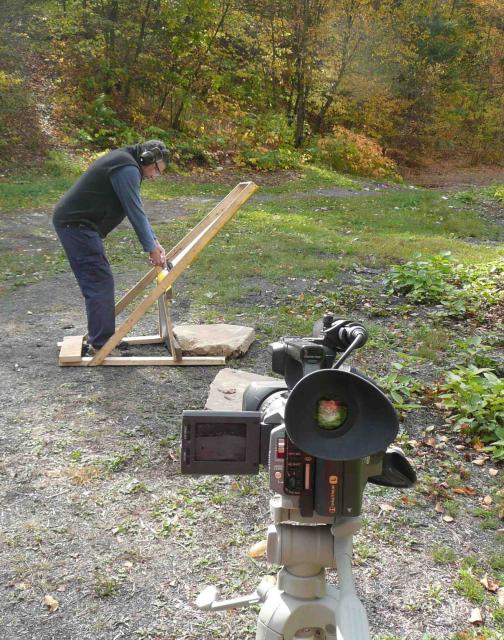 Since 1983 Abu-Jamal has languished in the confinement of death row following his controversial July 1982 conviction for the murder of Officer Faulkner.

Now 57, Abu-Jamal has spent nearly 29 years of his life in prison for a crime he has consistently denied committing – a crime that ample evidence conclusively proves could not have occurred as police and prosecutors have proclaimed.

Authorities, for example, claim Abu-Jamal fired four shots at the policeman, while straddling the officer as he lay defenseless on a sidewalk, striking him only once with a fatal shot in the face.

However, police crime scene photos and police reports make no reference to any bullet marks in that sidewalk around the fallen officer – marks that should have been clearly visible if Abu-Jamal had fired three shots at almost point-blank range into the sidewalk as witnesses and the prosecutor claimed.

As detailed in a thorough investigative ballistic test released in September 2010 by This Can’t Be Happening! (see the film at the end of this story), it is impossible to fire high-velocity bullets into a sidewalk without leaving any marks. 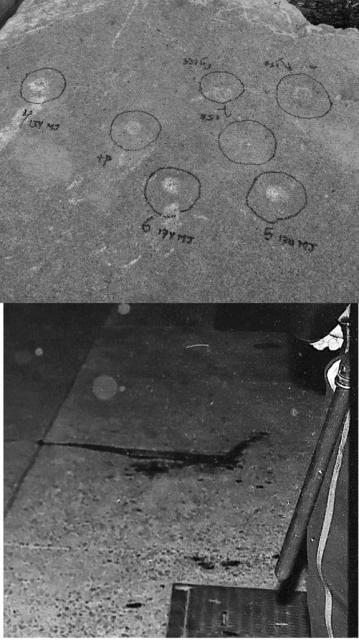 TCBH! test-fired each kind of .38-caliber bullets referenced in police reports about the 1981 crime scene into a slab of old city sidewalk, and each of those bullets left easily visible marks – marks totally contradicting claims by authorities that Abu-Jamal wildly fired into the sidewalk without leaving bullet marks.

Rulings by federal and state courts denying Abu-Jamal the legal relief routinely granted other inmates who had raised the same appeals claims are the least-examined element of this internationally-condemned injustice.

The federal 3rd Circuit, for example, declined to grant Abu-Jamal a new trial based on solid legal issues from racial discrimination by prosecutors in jury selection to documented errors by trial judge Albert Sabo, the late jurist who relished his infamous reputation for pro-prosecution bias.

The 3rd Circuit’s 2008 ruling faulting Sabo for his inability to provide the jury with simple death penalty deliberation instructions included the contradictory conclusion that Sabo had adequately provided the jury with instructions about a highly complicated legal issue involving misconduct by the trial prosecutor.

Faulting Sabo for that flawed instruction on prosecutorial misconduct would have required the 3rd Circuit to give Abu-Jamal a whole new trial. Unwilling to do that, the court sidestepped its duty to ensure justice by deciding to just eliminate Abu-Jamal’s death sentence instead.

Pennsylvania state courts have released three Philadelphians from death row – half of the state’s death row exonerations to date – citing misconduct by police and prosecutors … misconduct that was less egregious than that documented in the Abu-Jamal case. One of those Philadelphia exonerations involved a man framed by police for a mob-related killing who was arrested six months before Abu-Jamal.

While many people in Philadelphia may feel Abu-Jamal is guilty as charged, millions around the world question every aspect of this conviction, citing facts that proponents of Abu-Jamal’s conviction deliberately dismiss as irrelevant.

This widespread questioning of Abu-Jamal’s guilt is the reason why pro-Abu-Jamal activities occurred around the world commemorating Abu-Jamal’s April 24 birthday, including people in San Francisco attending a screening of the “Justice on Trial” movie examining ignored aspects in the case and people marching for Abu-Jamal’s freedom in the Brixton section of London.

Officials in the French city of Saint-Denis will stage a ceremony rededicating a street they named for Abu-Jamal during the last weekend in April.

The ire erupting over Abu-Jamal’s prominence on the part of advocates of his execution contains contradictions that are as clear as the proverbial black and white.

The U.S. Congress engaged in color-coded contradiction approving a May 2006 resolution condemning far off Saint-Denis for its honoring Abu-Jamal by placing his name on a small one-block-long street.

‘Cop killer,’ a term of honor and condemnation

Over a decade before that anti-Saint-Denis outrage, over 100 members of Congress had battled to block the U.S. government from deporting a white fugitive convicted of killing a British Army officer in Belfast, Northern Ireland.

That officer’s killing had occurred during an investigation into the murder of another Belfast policeman. 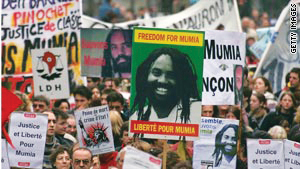 Incidentally, the U.S. Congress did not erupt angrily when the City Council of New York City voted to place the name of that fugitive – Joseph Doherty – on the street corner outside the federal detention center then housing him.

In 1988 – six years after Abu-Jamal’s conviction – more than 3,000 Philadelphians signed petitions asking federal authorities to grant Doherty special permission to leave his federal detention cell for one day to allow him to serve as grand marshall of Philadelphia’s St. Patrick’s Day Parade. 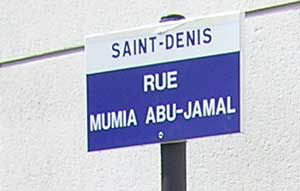 Judge Bradley told a reporter in 1988 that he had no problems as a jurist reconciling his support for a convicted felon because he questioned the “fair treatment” Irish nationals received in English courts.

Critics who castigate those who contribute to Abu-Jamal’s defense fund, especially Hollywood stars, did not object to fundraising on behalf of one of the white Los Angeles policemen convicted in federal court for the 1991 beating of Rodney King. That criminal cop was allowed to keep nearly $10 million in sales from his book and from a fundraising campaign on his behalf – monies generated mainly after that the former police sergeant’s imprisonment following a civil rights violation conviction.

Mumia, voice of the voiceless

One reason the decades-old Abu-Jamal case continues to generate support and rage is Abu-Jamal himself. 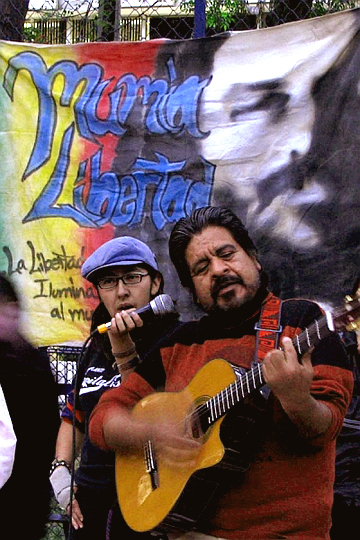 A charismatic figure who is articulate, with a level of education and intelligence atypical of the mainly illiterate denizens of death row, Abu-Jamal is able to explain his case, as well as to expose the horrors of the nation’s prison system and its death rows.

Even the prosecutor at Abu-Jamal’s 1982 trial – Joseph McGill – described him during that trial as the most “intelligent” defendant he’d ever faced.

And another prosecutor, during Abu-Jamal’s tainted 1995 appeals hearing, said he didn’t think “the shooting of Officer Faulkner is characteristic of this defendant.” Abu-Jamal had no record of violence or criminal acts before his 1981 arrest.

Supporters applaud Abu-Jamal’s defense of the downtrodden, particularly his poignant criticisms of America’s prison-industrial complex, which incarcerates more people per capita than any other country on earth.

Abu-Jamal’s stance highlighting the deprivations of the have-nots, predated his arrest, and had earned him the title of “voice of the voiceless” during his professional broadcast reporting career, which ran from 1975 till his December 1981 arrest.

Abu-Jamal rarely uses his worldwide platform to speak about his own plight, preferring to focus instead on the injustices endured by others.

Linn Washington a professor of journalism at Temple University and award-winning columnist for the Philadelphia Tribune, has covered Mumia Abu-Jamal’s fight for freedom from the beginning, in December 1981. This story first appeared on This Can’t Be Happening, the website featuring the work of a news collective comprising Linn Washington and three other renowned journalists. They can be reached at thiscantbehappeningmail@yahoo.com.