How many times must a parent bury a child? 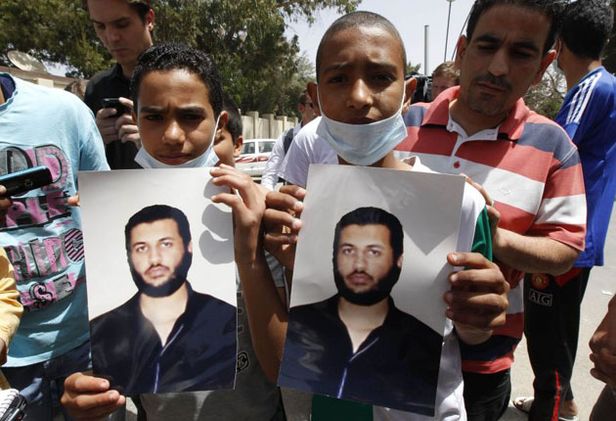 Well, in the case of Muammar Qaddafi, it’s not only twice: once for his daughter, murdered by the United States bombing on his home in 1986, and again on April 30, 2011, when his youngest son, Saif al Arab, died in another bombing, but yet again for three young children, grandbabies of Muammar Qaddafi, killed along with Saif at the family home.

Now I watched Cindy Sheehan as she bared her soul before us in her grief; I cried when Cindy cried. Now how must Qaddafi and his wife feel? And the people of Libya, parents of all the nation’s children gone too soon. I don’t even want to imagine.

All my mother could say in astonishment was, “They killed the babies; they killed his grandbabies.”

The news reports, however, didn’t last more than one half of a news cycle because on May 1, at a hastily assembled press conference, President Obama announced the murder of Osama bin Laden.

Well, I haven’t forgotten my empathy for Cindy Sheehan; I haven’t forgotten my concern for the children of Iraq that Madeleine Albright said were OK to kill by U.S. sanctions if U.S. geopolitical goals were achieved. I care about the children of Palestine who throw stones at Israeli soldiers and get laser-guided bullets to their brains in return. I care about the people of North Africa and West Asia who are ready to risk their lives for freedom. In fact, I care about all of the children – from Appalachia to Cancer Alley, from New York City to San Diego, and everywhere in between.

On May 22, 2011, I had the opportunity to visit the residence of the Qaddafi family, bombed to smithereens by NATO. For a leader, the house seemed small in comparison, say, to the former Clinton family home in Chappaqua or the Obama family home. It was a small whitewashed suburban type house in a typical residential area in metropolitan Tripoli. It was surrounded by dozens of other family homes.

I spoke with a neighbor who described how three separate smart bombs hit the home and exploded, another one not exploding. According to the BBC, the NATO military operations chief stated that a “command and control center” had been hit. That is a lie. As anyone who visits the home can see, this home had nothing to do with NATO’s war. The strike against this home had everything to do with NATO adopting a policy of targeted assassination and extra-judicial killing – clearly illegal.

The neighbor said he found Saif al-Arab in his bedroom underneath rubble; the three young grandchildren were in a different room and they were shredded to pieces. He told of how he picked up as many pieces as he possibly could. He told us that there are still pieces there that he could not get. He asked us to note the smell – not the putrid smell of rotting flesh, but a sweet smell. I did smell it and thought there was an air freshener nearby. It smelled to me of roses. He asked me why this was done and who was going to hold NATO accountable.

Muammar Qaddafi was at the house. But he was outside near where the animals are kept. It is a miracle that he survived. From the looks of that house and the small guest house beside it, the strike was a complete success if the goal was to totally and thoroughly demolish the structure and everything inside it. 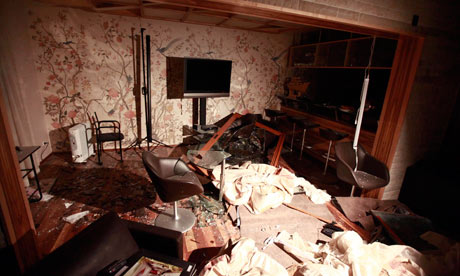 NATO wants us to believe that toys, items and clothing, an opened Holy Koran and a soccer board game are the appointments found in military command and control offices. I wonder if we could find such articles in NATO’s office in Brussels.

The opened Holy Koran seemed to be frozen in time. In fact, there was a clock dangling from its cord–dangling in space. And indeed, for the four young people in that house at the time of NATO’s attack, time had stopped.

The concussion from the bombs were so great that every tile on the walls and floors of the home had been knocked from the walls. Black burn marks scorched the walls. The force broke a marble or granite countertop. The bathtub was literally split into two parts. Shards of the bomb were everywhere. I wondered if the place was now contaminated with depleted uranium.

The Qaddafi home is a crime scene – a murder scene. The United States prisons are full of men and women who are innocent – even on death row. I wonder where the guilty who are never prosecuted go.

Now, if the International Court of Justice were really a repository of justice, it would be investigating this crime. Instead, it is looking for yet another African to prosecute. We in the United States are familiar with this: On our local news every night, we are saturated with photos of Black and Brown criminals with the implication being that White people don’t commit crime. The moment the face of someone arrested is not shown, then we know that the culprit is White. It’s the unwritten code that we people of color all live by wherever in the world we might happen to be. Global apartheid is alive and well and exists on many levels.

I left the house sick in my heart. As I was about to depart, the neighbor begged me, asked me over and over again, why had this happened? What had they done to deserve this? He seemed to not want me to leave. Honestly, I think I was his little piece of America, his little piece of President Obama and I could help him to understand why this course of action was necessary from my president’s point of view. He said NATO should just leave them alone and let them sort out their problems on their own.

I did leave his presence, but that man’s face will never leave me.

Dr. Martin Luther King Jr. warned, “History will have to record that the greatest tragedy of this period of social transition was not the strident clamor of the bad people, but the appalling silence of the good people.”

In response to my previous article, “NATO: A feast of blood,” I received the following message about Buddha from Shiva Shankar, who excerpted Walpola Rahula’s “What the Buddha Taught”:

“The Buddha not only taught non-violence and peace, but he even went to the field of battle itself and intervened personally, and prevented war, as in the case of the dispute between the Sakyas and the Koliyas, who were prepared to fight over the question of the waters of the Rohini. And his words once prevented King Ajatasattu from attacking the kingdom of the Vajjis. …

“… Here is a lesson for the world today. The ruler of an empire publicly turned his back on war and violence and embraced the message of peace and non-violence. There is no historical evidence to show that any neighboring king took advantage of Asoka’s piety to attack him militarily, or that there was any revolt or rebellion within his empire during his lifetime. On the contrary there was peace throughout the land, and even countries outside his empire seem to have accepted his benign leadership.”

Please don’t allow special interest press and war mongering gatekeepers of the left to blot out the tragedy unfolding in Libya. Please don’t allow them to take away our chance to live in peace throughout our land and with countries inside and outside our hemisphere. Congress should vote to end NATO’s action in Libya and, barring that, should assert its constitutional prerogatives and require the president to come to it for authorization of this war. And then, Congress should heed the wisdom of the people of our country who are against this war and vote for peace.

Editor’s note: Congress is listening. On Thursday, May 26, the Republican-controlled House voted 416-5 to add a ban on-ground troops in Libya to a defense authorization bill that sets the Pentagon’s budget. Next week, the House will vote on a measure sponsored by Rep. Dennis Kucinich calling on President Obama to end U.S. military involvement in Libya altogether.