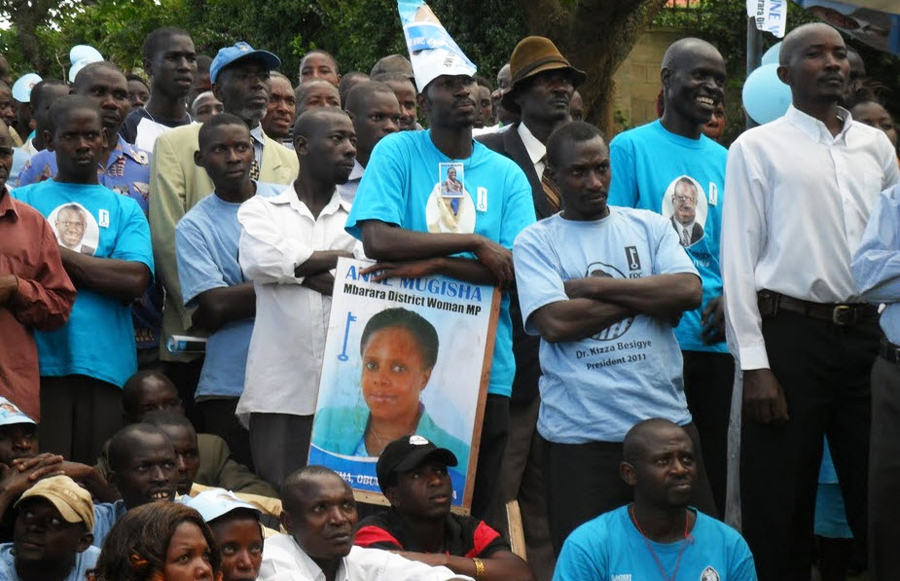 During the past week, many Ugandan activists have been quoting Pastor Niemöller’s poem and they have good reason. I have spent the last eight years trying to attract international attention to human rights abuses and the lack of democratic governance in Uganda, and in all those years I have never been able to get one paragraph or one minute of interest from major news bureaus, journalists or even activists in the USA.

Yet in the last few weeks, because of the anti-homosexuality legislation, I have received more phone calls and expressions of interest in my work than in all the past eight years put together. So like most activists, I am cynical of the motives of both those seeking to save us from homosexuality and those seeking to save us from Christian fundamentalists.

The anti-homosexual bill has, for better or worse, drawn Uganda into the midst of U.S. culture wars, and Ugandan human rights activists are unconvinced that the sudden attention has anything to do with genuine concern for Ugandans or their rights.

The questions on our minds are:

Where were they when Uganda was indicted by the International Court of Justice for committing violations of international human rights and international humanitarian law in the Democratic Republic of the Congo (DRC) and are they aware that the Ugandan government has never compensated DRC or been held accountable by Western governments for the devastation that Uganda’s military committed in DRC?

Where were U.S. activists when millions of Ugandans were herded into internally displaced peoples camps and kept there for two decades in destitution and inhuman conditions? Horrendous human rights abuses were committed by the military and the government through omission or commission in these camps for two decades, and yet Uganda’s president and officials continued to enjoy the prestigious company and favor of the international community.

Why is there no blip from U.S. human rights activists when Ugandans are brutalized and killed in order to keep the Kampala government in power?

And more recently, where were these so-called human rights activists last September when ethnic tensions overflowed and government released its brutal police and military on the streets, leaving 30 people dead?

Why is there no blip from U.S. human rights activists when Ugandans are brutalized and killed in order to keep the Kampala government in power?

My opposition to the anti-homosexuality bill is not about taking sides in U.S. culture wars; it stems from my experience with state sponsored persecution in Uganda. I have witnessed legislation and policies being implemented selectively for the sole purpose of isolating and persecuting unwanted elements in society, particularly opposition activists. Many commentators in the U.S. seem unaware of other U.S.-sponsored legislation, policy or training that has had an adverse impact on human rights in Uganda.

The U.S.-sponsored law on terrorism was used between 2001 and 2006 to scatter the opposition because they were dubbed terrorists by the government. When Uganda’s popular opposition leader Kizza Besigye returned to Uganda in 2005 after four years in exile, he was charged with terrorism in a military court in addition to trumped up charges of treason and rape in a civilian court. The rape case was dismissed, but the treason and terrorism charges linger on before the courts in Uganda.

The meddling of U.S. conservative evangelists in Uganda has led the Ugandan government to pursue abstinence measures over the use of condoms in curbing the spread of HIV/AIDS and as a result Uganda’s fertility rates and HIV/AIDS infection rates are on the rise. The population explosion that has resulted from these abstinence policies has hindered efforts to fight poverty.

I also oppose the bill because I am not convinced there is need for separate laws for people based on their sexuality. Families and children are protected by our penal code, which punishes unwanted and criminal sexual advances, including rape, sodomy, prostitution and defilement.

Existing laws are not enforced because perpetrators of practices like defilement and forced marriage of underage girls and wife inheritance hide behind culture and religions that allow marriage of minors, or perpetrators bribe corrupt enforcement officials to turn a blind eye. So our culture and some religions are invoked selectively to conveniently accommodate certain practices like marriage of underage girls or to persecute minorities like homosexuals. Selective enforcement of the law flies in the face of the principle of equity and Uganda’s commitment to international human rights treaties and conventions.

I believe that a person who willfully or forcefully spreads HIV/AIDS through heterosexual or homosexual contact is hateful, and there is no reason why we would punish the homosexual and spare the heterosexual. I think we should be approaching these issues from a compassionate non-discriminatory perspective that emphasizes education and counseling on HIV/AIDS.

I oppose the bill because the legislation has an ulterior motive of political mobilization. Homosexuality was practiced in Uganda before English missionaries arrived in the country. This is a well-documented fact in the story of the Uganda Martyrs, who included the Buganda king’s pages that embraced Christianity and rejected the King’s homosexual advances, hence their martyrdom.

Yet the state has deliberately rallied the population to believe that homosexuality is a foreign practice that is being “imported” into the country. Ugandans are essentially conservative traditionalists and they are being mobilized around this one issue and diverted from real issues like widespread poverty and entrenched pervasive corruption which the government has failed to solve for 24 years.

Homosexuality was practiced in Uganda before English missionaries arrived in the country. Yet Ugandans are being mobilized around this one issue and diverted from real issues like widespread poverty and entrenched pervasive corruption.

Finally, I also oppose the law because it can and will be used in the same manner as the Malaysia and Zimbabwe governments used anti-homosexuality sentiments to persecute and derail the careers of political opponents.

Unfortunately, I can understand why some think that Western interest in the rights of homosexuals exceeds interest in all other human rights abuses in Uganda that have claimed thousands of lives and caused pain and anguish to millions more.

Anne Mugisha, deputy secretary for international and regional affairs of the Forum for Democratic Change, is a member of Dr. Kizza Besigye’s party and was the opposition candidate for Women’s Member of Parliament in Uganda’s Mbarara District in the February election. She can be reached at anne@fdcuganda.org and at facebook.com/anne.mugisha.