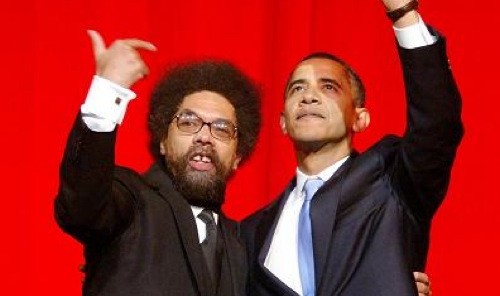 If a man is offered a piece of stale bread for dinner, he’s probably not going to want to eat it. If you were to then say, well, “Stale bread is better than horse manure,” this won’t make the stale bread taste any better. When given the choice between bad food and horrible food, some people would just rather not eat or try to eat someplace else.

But this is what Black America is being fed when they are told that they should passionately support the Democrats simply because the Republicans are going to be worse. The meal is being fed, in part, by elitist liberals like Melissa Harris Perry at Tulane University (formerly at Princeton), a darker-skinned staple in the white liberal establishment and fully-indoctrinated member in the Barack Obama fan club.

In a recent article, where Perry works diligently to dismiss the political and scholarly relevance of Dr. Cornel West (a huge mistake on her part, since West earned his stripes when Perry was still in high school), she reproduces the same rhetoric that Ivy Leaguers utilize to somehow convince rank-and-file Black folks to start seeing things that simply don’t exist. The same political magic trick was used when the administration got a tiny militia of Black Harvard law professors to campaign on behalf of Elena Kagan for the Supreme Court in spite of her undeniably racist hiring record – this is how Harvard and Yale folks take care of one another. Notice that our entire Supreme Court is full of Ivy League graduates; the elite protect their power by manipulating the minds of poor and working class Americans.

Let’s be clear, I am no fan of the disposition against President Obama taken three years ago by Tavis Smiley. I took Tavis to the carpet for his very personal assault on Obama, which I speculate might explain why he hasn’t ever spoken to me. I am neither an Obama critic nor am I a super fan.

My agenda is simple: I want to see leading politicians address massive Black unemployment, mass incarceration, rampant racial discrimination in the workplace and the dysfunctional educational systems that are destroying Black children and families. To date, politicians are not standing strong on nearly any of these issues, and given that our surveys show that these problems affect the vast majority of the Black community, this should be a concern.

What disturbs me most about the calls I’ve received from the White House and others, who somehow believe that we are helping the president by resigning our right to free speech, is that the political types in Washington are more concerned about who gets blamed for the problem than they are about solving the problem. After Dr. Wilmer Leon and I spoke about the seemingly unproductive relationship between the Obama administration and the Congressional Black Caucus, most prominent critics of that conversation could only ask, “Why are you blaming Valerie Jarrett for canceling meetings with the CBC?”

Most interesting is that I spoke to Dr. Leon because he could provide an objective opinion on political strategy without any of the selfish agendas that drive those who either reject or support the president outright. Dr. Leon makes it clear that if you spend all of your time either hating the Obama administration for no reason or popping champagne bottles because you think we’ve hit Juneteenth Part II, you are not using your political voice in an effective way.

I don’t care if the responsibility for Washington’s political apathy falls on Valerie Jarrett, Barack Obama, the CBC or the pet chicken in the front yard. All I know is that I just talked to the daughter of a formerly incarcerated man who told me that none of his five children graduated from high school because their father was not there to guide them. I am not sure why any Black person on the planet would have any incentive whatsoever to vehemently support an administration with a Black male attorney general who has not lifted a finger to reform a justice system that is undeniably racist.

So, perhaps those who are quick to implement the “stop snitching on Obama” policy on Cornel West should stop trying to counter his argument by telling West to remain silent. Instead, he should be silenced with relevant and meaningful action on the part of the Obama administration.

Spinning, twisting and reshaping the conversation means nothing when Black unemployment continues to rise, mass incarceration decimates our people and our children are not being educated. You can either get angry at someone for calling you fat, or you can take your fat butt to the gym.

Unfortunately, it’s easier for Washington types and elitist liberals to use political double-speak than it is for them to point to concrete evidence that working and middle class Black people – the bulk of whom experience rampant and unregulated discrimination in the workplace – have a reason to be excited about the next election. Whether they should reject President Obama vs. his Republican counterparts is debatable; but whether they should reject all of Washington is undeniable.

The bottom line is simple: Giving Black folks a choice between stale bread and horse manure is not going to make them want to eat at your restaurant. It’s time for some political courage and action, instead of asking us to submit to a system that clearly isn’t working.

Whether one agrees with Cornel West or not, he must ultimately be given credit for guiding the conversation back to poor, Black and brown people. Attacking West for pointing out the obvious is nothing more than a counter-productive distraction.

Dr. Boyce D. Watkins, “The People’s Scholar,” is a leading social commentator, advocating for education, economic empowerment and social justice, and is one of the top Black speakers in America. Learn more at www.boycewatkins.com and www.yourblackworld.com. This story first appeared at http://yourblackworld.com/2011/05/18/1262/.