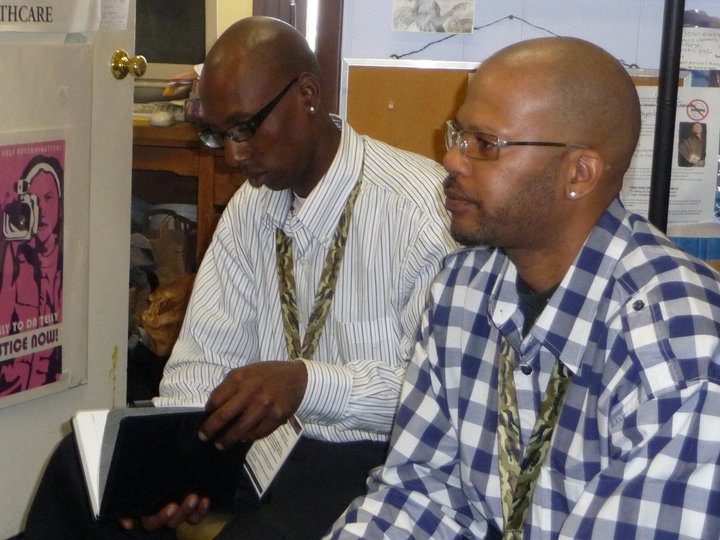 “Hunters Point is home. It’s what’s made me and what nourished me. It’s where I have been poor, police harassed, ignorant and struggled with gang violence. It’s where I’ve learned everything I know and everything I need to un-learn,” said Jamal Modica, founder of Tough House Project, at the launch on Malcolm X’s birthday of the Standing Up for Ours Tours at POOR Magazine’s indigenous news-making circle.

The Standing UP for Ours Tours is a vision of neighborhood dialogues created by James to listen, speak and engage with young folks in communities struggling with gang violence, police harassment and poverty across the Bay Area. His vision includes collaborating with multi-racial, multi-lingual and multi-generational communities and community organizations in struggle who desperately need to be heard.

“I am the rose that grew from the concrete jungle of the Bayview Hunters Point. I have witnessed over a dozen funerals of children under 12 years old. I have also filmed and witnessed over a dozen graduations of middle and high school students who weren’t supposed to make it,” said Jamal, who is himself a young African-descendent filmmaker and a symbol of community-led resistance and revolution.

“Standing Up for Ours Tours is so important because right now our communities are on life support and we must re-boot our minds,” said Queenandi, African-descendent poverty scholar, teacher and reporter with POOR Magazine. She was referring to the lies our young people are always taught in “Amerikkkan skkkools” and, as we say at POOR Magazine, we need to re-educate our young folks of color on their inherent cultural power and beauty.

“The system is set up so these turf wars remain in place so our young folks think, ‘I’m from Fillmo so I can’t go to Sunnydale’ or ‘I’m from HP so I can’t go to the Mission,’” said Ruyata Akio McGlothlin, poverty scholar, poet, artist and reporter for Poor News Network and POOR Magazine and a resident of Hunters Point. Ruyata was referring to turf war lies that falsely breed hate for our brothers and sisters of color in Frisco, Oakland, LA and beyond.

POOR Magazine/Poor News Network is a media, art and education organization led by poor and indigenous people rooted in many poor communities of color across the Bay Area. We facilitated the Standing Up for Ours Tours press conference and will be joining Jamal on his first tour because we believe first and foremost that we don’t need a poverty pimp, a savior or an institution; we must de-colonize ourselves from this plantation grid of prisons, poverty pimps and saviors and truly lead ourselves out from under this oppression to liberation.

“Too many of our children are dying, and we won’t have a future if our children keep dying,” declared Jewnbug, mama and poverty scholar, poet and teacher, emphasizing the necessity of a leader like Jamal to help other young folks of color re-insert a revolutionary code of conduct.

“What the so-called officials want to do in our poor neighborhoods of color to ‘fix’ the problem is bring in the gang injunction,” Muteado Silencio, poverty scholar, teacher, poet and reporter for POOR Magazine, observed about the lie of criminalization, which is how Amerikkka’s plantation grid always decides to “fix” anything having to do with us poor people and people of color.

“The purpose of this tour is to give a space for young folks to speak, to engage, to have fun and be heard, to lead. That’s very important when so often young people are never heard at all,” said Jose Cuellar, teacher and La Raza scholar and artist.

“Society only wants to use us, the poor, the communities of color, to mythologize us so they can profit off our exploitation, said Jeremy Miller, organizer with Education not Incarceration and the Idriss Stelley Foundation.

Speaking for my ancestors, elders, family and children who have barely survived 500 years of kkkolonization caught up in criminalized lies and racialized hate, with resources stolen, I concluded the press conference with these words for the Jamal’s vision: “POOR Magazine family is proud to join the Standing Up for OURS Tours, as it is an example of revolutionary people-led solutions grown in the communities it is speaking with and for, solutions like POOR Magazine and all of our efforts to ensure that our young folks and families are truly heard.”

The first Standing Up for Ours Tour is planned for Hunters Point in August and will feature poetry, food, entertainment, information and fun for young folks of all ages. Jamal is hoping that community organizations come out to table and provide their liberation solutions. After the HP tour, Jamal hopes to come to three more poor neighborhoods of color in the Bay Area over the next six months.

Tiny – or Lisa Gray-Garcia – the consummate organizer, is co-founder with her Mama Dee and co-editor with Tony Robles of POOR Magazine and its many projects and author of “Criminal of Poverty: Growing Up Homeless in America,” published by City Lights. She can be reached at deeandtiny@poormagazine.org. Visit www.tinygraygarcia.com and www.racepovertymediajustice.org.