Sidewalks are for People Day, May 22, dedicated to Harvey Milk’s birthday, happened in three cities and two states simultaneously.

The May 2011 “Sidewalks are for People” resistance, he said, sprang up organically, reversing the path from San Francisco to Berkeley and Portland.

Chronicle columnist C.W. Nevius picked up the sit/lie idea promoting this “attempt to build political support for an initiative that could address one of the most persistent problems in downtown San Francisco: the unpleasant and infamous street scene.” It died when he got distracted.

Offer-Westort termed the process a “national system of stupidity” whereby local laws spring up. Bad ideas spread not just individually or locally, but regionally and nationally.

Such ideas travel from place to place, through informal trips, news or conferences.

The “Street Access for Everyone” ordinance states: “Sitting, lying down, or leaving one’s belongings on a public sidewalk in a (designated) high pedestrian traffic area during certain times (7 a.m. to 9 p.m.) would not be permitted.” The twist: Though “sitting on the sidewalk will earn a citation,” moving homeless people off the street, amenities like benches are provided “that make life more pleasant.”

Good ideas spread back through the same channels 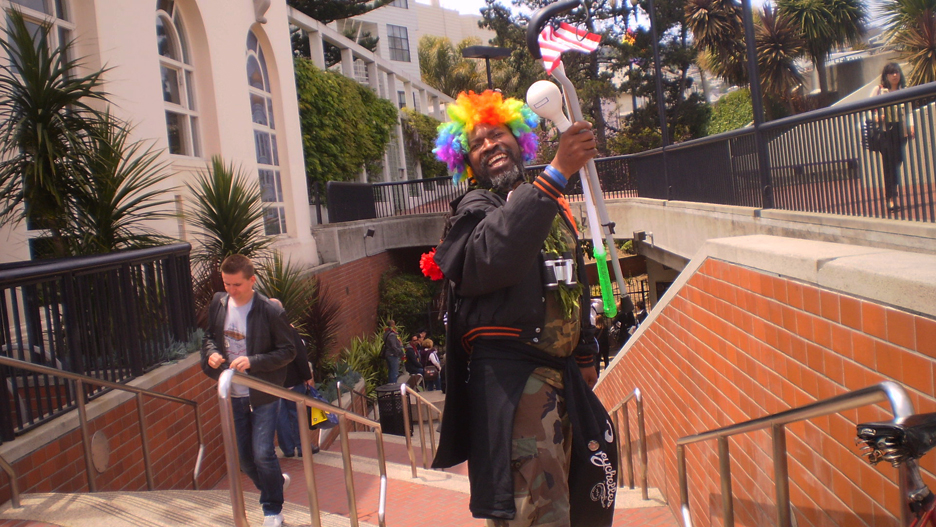 According to Offer-Westort, some public relations person didn’t just announce, “It would be cool to pull off nine events simultaneously in three cities.” The people decided to reclaim San Francisco sidewalks. Then Berkeley folks asked, “Can we do that too?” Then Portland folks were like, “We’ll do something simultaneously.”

We didn’t plan a multi-city resistance. It came into being. People reclaimed public space and civil society, saying, “This is ours.”

We build our movement spreading culture, the people’s voice and democracy, using the identical viral pathways conservatives use to disperse anti-culture, authoritarianism and kleptocracy.

This movement’s unified, organic energy made it independent, powerful and unstoppable.

Though Portland’s law inspiring San Francisco’s sitting ban was found to violate the Oregon State Constitution, homeless citizens still face a “sidewalk management” ordinance restricting them to the curbside half of downtown sidewalks.

Berkeley, Calif., as reported by Lydia Ganz and Terry Messman

At the Berkeley BART station, the “Stand Up for the Right to Sit Down Coalition” protested the anti-sit/lie ordinance with a unique, dynamic “chair-a-pillar.” A sinuous caterpillar’s movements up and down the sidewalk symbolized homeless people constantly forced to get up, dragging belongings around.

Sitters in a long row of brightly painted chairs got tired hauling seats to the end of the line.

The line snaking around the station drew honking and pedestrian involvement.

The sitting ban remains a proposal. Berkeley business interests insist Mayor Tom Bates supports it and City Council members are apparently willing to pass it. Resistance groups hope to erode support before introduction to the council, whom the grapevine says may sneak sit/lie through this summer when UC students aren’t there.

The Haight in San Francisco, as reported by Bob Offer-Westort

At the Haight Street “Sidewalks are for People” action, the Coalition on Homelessness and the Homeless Youth Alliance offered homeless youth a welcoming place.

Despite its history as a counter-culture pilgrimage site, the Haight was always the epicenter of sit/lie struggles.

In its ’09-‘10 all-out push for sit/lie, the Haight-Ashbury Improvement Association claimed to represent the neighborhood.

Members of the Homeless Youth Alliance, the Coalition on Homelessness and the Haight-Ashbury Neighborhood Council – opposing sit/lie from day one – held a barbecue at Haight and Cole and a “social stone soup” where friends performed sit/lie or homeless harassment poems. Complementing the budget dogs, neighbors brought corn on the cob, portobello mushrooms and asparagus.

We played Grateful Dead, a perennial Golden Gate Park favorite, Neil Young and the Beatles. HANC friends distributed information, inviting passersby to our barbecue and the celebration of public space, and bringing homeless and housed neighbors together.

The sergeant compromised: We could grill between parked cars. Driving away, he cautioned, “Sitting on the sidewalk is a citable offense.”

The Tenderloin, Polk and Sutter, San Francisco, as reported by Rachel West

US PROStitutes Collective and Legal Action for Women held their event in the Tenderloin at Polk and Sutter. Tenderloin sex workers, people of color, immigrants and LGBTQ people face regular police harassment.

Our focus was reclaiming public space for all criminalized people. Key message: Criminalization must end.

Sex workers, many driven into prostitution by homelessness, poverty and destitution, report being repeatedly ticketed and arrested for loitering and nuisance charges under existing Municipal Police Codes. Now they face sit/lie enforcement.

Neighbors came with stories. We spoke about the sit/lie law.

The Castro, San Francisco, as reported by Carol Harvey

Harvey Milk would love his “No on Sit/Lie”/”Sidewalks are Still for People” birthday party spreading through two Bay Area cities up the coast to Oregon.

A core group stayed. Neighbors cycled through, sang and spoke standing on a soap box like Harvey used encouraging gay neighbors to exit the closet.

Reported event organizer Tommi Mecca said: The “Castro had about 50 people throughout the two hours. We began with two songs from Singers of the Street, ending with a Bay Times newspaper photo-op.”

A USF professor suggested instead of chasing homeless people from in front of their stores, shop owners encourage business by creating civic squares where a spectrum of people meet, perform and rest.