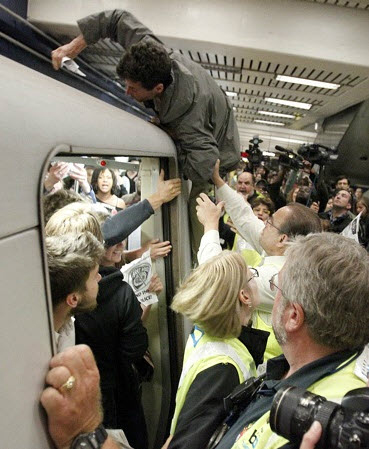 On July 3, 2011, at 9:45 p.m., a 45-year-old scruffy looking man of European descent — only identified eight days later through his driver’s license picture as Charles Blair Hill, described ad nauseam by the corporate press as a “wobbly drunk” and a “crazy hippy” — met a violent fate on a San Francisco Civic Center BART platform at the hands of two BART thugs in blue, one white and one Asian. Three bullet casings were recovered on the platform, and Charles was declared dead at San Francisco General Hospital an hour later.

Merely BARTing while homeless and possibly intoxicated, just two hours before Independence Day, has now become a justifiable death sentence on the street in the home of the brave and the land of the free.

The people of San Francisco will not stay silent on any BART police killings!

Eight days later, on July 11 at 5 p.m., in commemoration of Charles’ stolen life at the hands of the BART police, an estimated crowd of 200 civil rights protesters — not 60 to 80, as estimated by the corporate press — of all races, ages and economic backgrounds descended en masse to the Civic Center BART platform where Charles was executed like a rabid dog. There we met a barrage of hundreds of cops in full riot gear — some flanked with huge K9 dogs, pre-civil rights style — while we chanted: “No justice, no peace! Cops, pigs, dismantle the BART police!”

Quiet as kept, Charles Hill’s killing by BART police is the fifth since 1992

Those who are relatively new to the Bay Area may not know that this is the fifth BART police killing. All have been people of color with the exception of Charles Hill. 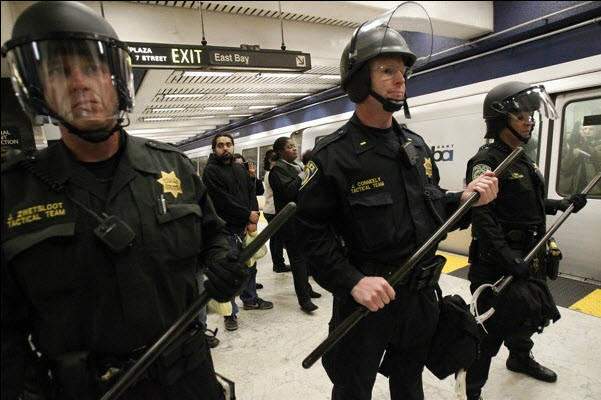 In the previous cases, BART’s internal investigations concluded that the officers felt threatened by the victims and were justified in pulling the trigger. That excuse is unbelievable given the circumstances of the killings:

‘At first I thought it was fireworks’

“At first I thought it was fireworks and we didn’t pay any attention,” said Edwin Li, a San Franciscan who was on a train stopped at the station when the shooting of Charles Blair Hill occurred. He got off the train and saw the two officers with Hill nearby on the ground. “There was this one girl who was kind of freaked out saying, ‘Oh my God, oh my God,’” said Li, adding, “There were people on the platform.”

The killing endangered the lives of innocent bystanders. Who do the BART police mean to serve and protect?

A BART commuter sent me a private message two nights ago, right after seeing Charles’ photo in SF Gate, the website for the San Francisco Chronicle: “Dear God! I knew him! I used to give him quarters all the time — sweet guy, he would not have hurt a fly!”

A young African American man, husband of one of my staff at Hayward Emergency Shelter, where I was the program director in November 2001, jumped fare at South Hayward BART as he was late to go pick up his newborn baby from childcare. Four BART cops brought him to the ground and started hitting him with sticks. One was recording and kept yelling, “Nigger, say you wanna die! You know you wanna die; say it, nigger,” at him so that he could become yet another “Black suicide by cop.”

There were witnesses on the platform. The young brother started screaming: “No! My wife and I just had a beautiful baby boy. I don’t wanna die! Someone PLEASE call the police, the REAL police!”

The BART cops gave him a citation and let him go. He and his wife were so shaken by the occurrence that I had to conduct two emergency counseling sessions with them and an interactive “Know Your Rights” seminar with the entire family of the victim.

Commuters’ ‘upset’ is more important than a stolen, anonymous life

The corporate press whines on and on about the major delays and “distress” incurred as a result of the Stolen Lives protest at the Civic Center BART Station July 11 by the commuters who were trying to get home.

I am yet to read one word of compassion for Charles Hill’s grieving family. I wholeheartedly hope that his family members and friends do not read the hundreds of hateful, vilifying and degrading comments entered below the corporate press coverage of the killing. Assault compounding horror and injury will stab through the hearts of Charles’ family and friends each time they read “wobbly drunk” in reference to their loved one — a remark posted by cops on company time, budget and equipment and by their police culture lovers.

Alcohol is a legal drug. Late stage alcoholism is an illness, a disability, not a crime!

Yet another wasted, stolen life

Yet another wasted, stolen life — white this time, probably to the immense relief of law enforcement in that it dilutes allegations of longstanding illegal, racially biased policing. 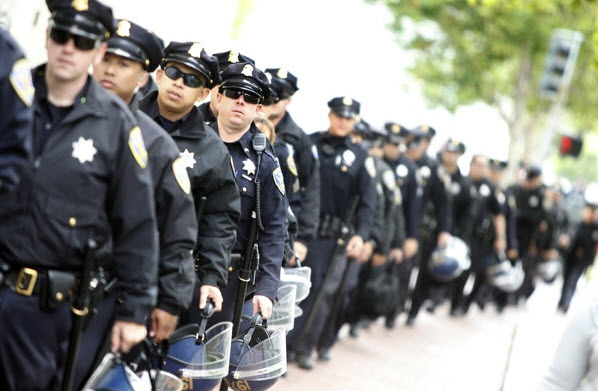 Or would it be that on the BART plantation, the poor, Black, brown and the homeless are all the niggers of our world?

What message can we take from this killing: Don’t drink and BART if you prefer to stay alive?

I would like to understand how a distraught subject with unsteady balance could possibly “lunge” at an officer, allegedly with a broken vodka bottle in one hand and a knife in the other, without falling down in the process? I am a female, disabled elder and with the basic self-defense training I took, I, to this day, have no difficulty in quickly bringing to the ground any large aggressor with my cane.

Police trainers advocate that one should not merely impair the fine motor skills of a subject while bringing him or her safely to the ground, hence protecting the subject from harming him or herself or nearby onlookers, but should “always shoot at center mass.” That is what I was taught for 15 weeks at my SFPD Academy citizens’ training in 2003.

I am a female, disabled elder and with the basic self-defense training I took, I, to this day, have no difficulty in quickly bringing to the ground any large aggressor with my cane.

What happened with the much praised Crisis Intervention Training (CIT) modeled after the Memphis Police Department training?

If you witness police misconduct and shoot pictures or a video with your cellphone, stay 10 feet away from the scene, loudly assert that you are “exercising your constitutional right to observe” and, if at all possible, take the chip out of your cell and hide it in your mouth after filming your evidence!

Rest in glory, brother Charles. You will not be forgotten. One lingering regret: I never got a chance to give you a quarter, a ciggie or a sandwich with a bottle of water.

Police trainers advocate that one should not merely impair the fine motor skills of a subject while bringing him or her safely to the ground, hence protecting the subject from harming him or herself or nearby onlookers, but should “always shoot at center mass.”