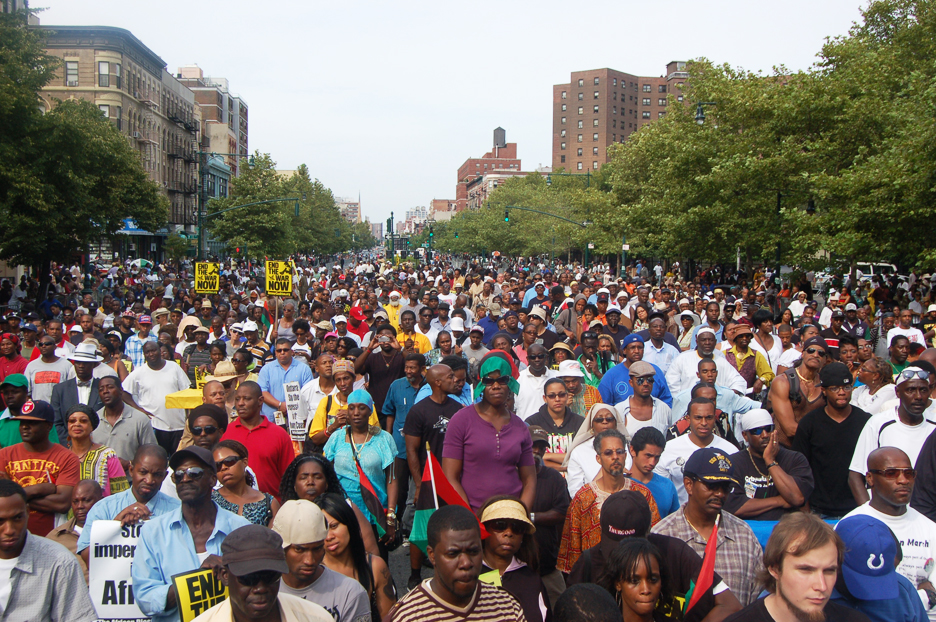 Thousands of people stood in unity at the Millions March in Harlem on Malcolm X Boulevard and 110th Street in Harlem, New York, on Saturday, Aug.13, to make the demand, “U.S. / NATO HANDS OFF AFRICA AND HANDS OFF AFRICAN PEOPLE!”

The struggle continues as Pan African organizers take their demand to the United Nations on Tuesday, Sept. 20, during the annual U.N. General Assembly of the Heads of State. A genuine discourse on the reformation of the United Nations structure must be put on the table. The total domination of the Western led Security Council can not continue in the 21st century.

African nations and peoples must unite to stop the re-colonization aggression and continue to build a movement toward a United States of Africa, now. We must stop the attack on Africans throughout the Diaspora, including the United States and Europe, during this global political-economic crisis.

The embattled leaders, Col. Muammar Gaddafi of Libya and President Robert Mugabe of Zimbabwe, have set an extraordinary example of political and economic self determination for African people. They are now under brutal attack with bombs and severe economic sanctions. Both weapons kill Africans every day. We must make a Pan African nexus throughout the world and stand in stiff resistance.

One of the most important issues at the Sept. 20 demo will be reaffirming the tremendous victory won by African People at the 2001 U.N. World Conference against Racism in Durban, South Africa. The Durban Declaration and Program of Action [DDPA] declared the transatlantic slave trade and slavery as crimes against humanity and that reparations were due the descendants of the victims of these crimes.

Since then, the U.S. and other Western countries have tried to erase this historic declaration and make it disappear. And now, heads of state at the U.N. will review it on Sept. 22.

Here in New York City, we are under attack by the Bloomberg administration in education, health care, housing and jobs. These attacks destroy families and the quality of our lives. We must make these connections and unite in an international struggle for human rights. Pan-Africanism or Perish!

Amadi Ajamu is an organizer with the Brooklyn-based December 12th Movement. He can be reached at amadi4@aol.com.