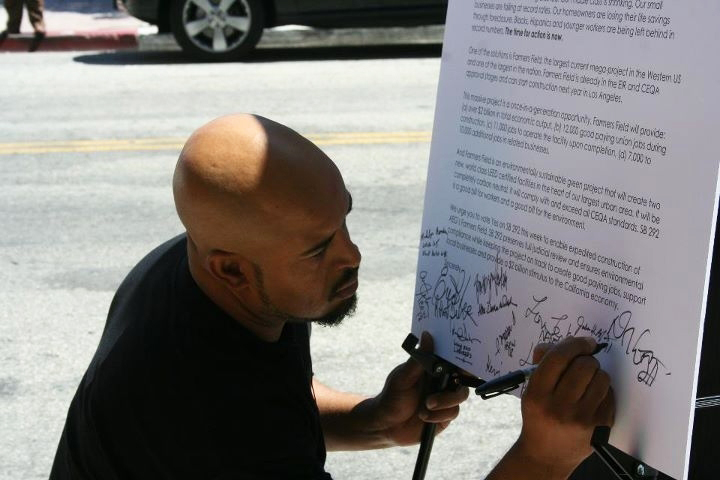 Gathered in front of the senator’s Long Beach district office to demand his support for SB 292, the bill to fast track AEG’s Farmers Field project, the speakers all signed a foam board-mounted letter to the senator and then hand-delivered it to his office.

SB 292 would fast track AEG’s new NFL stadium to be built in downtown Los Angeles. According to a press statement by the L.A. County Federation of Labor, the project “would create tens of thousands of good jobs in the construction, hotel, tourism and entertainment industries.”

Speakers included Madelyn Broadus, a sheet metal journeywoman who has been out of work for 18 months. She worked on L.A. Live and the Nokia Theater. “I am still really proud of the work I did there. I waterproofed the buildings,” said Broadus.

“I have three kids – 7, 10 and 14 years old. I need a job that lasts so I can take care of my family, Broadus said. “I hope Sen. Lowenthal decides to support [this bill] and good jobs for our communities. We want to work, but we need projects to build.” 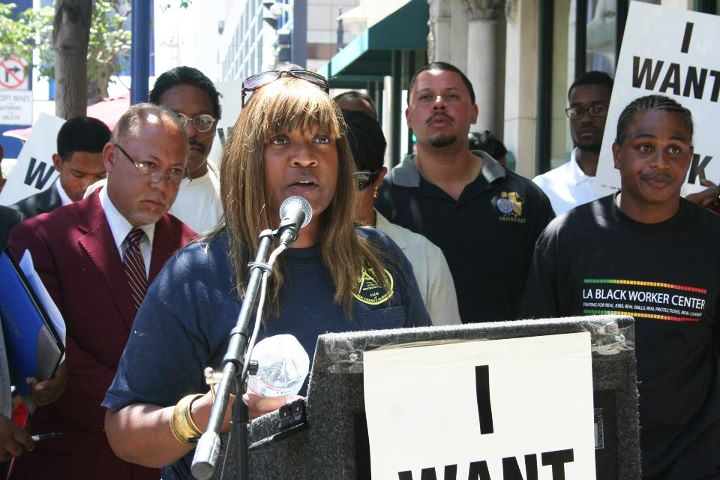 Leray Williams, a 23-year-old iron worker apprentice, also spoke at the event. “I was recently married and I’m unemployed. Something is wrong with that,” said Williams. “Farmers Field would mean a whole lot to me and a lot of other young people who need this opportunity.”

Lowenthal was selected by the coalition because he has not taken a position in support of the project.

The bill, authored by state Sen. Alex Padilla, D-Pacoima, would not exempt AEG (Anschutz Entertainment Group) from the requirement of the California Environmental Quality Act; it would still be subject to lawsuits if there were strong concerns or violations of any environmental standards but those lawsuits would be settled in a matter of months. 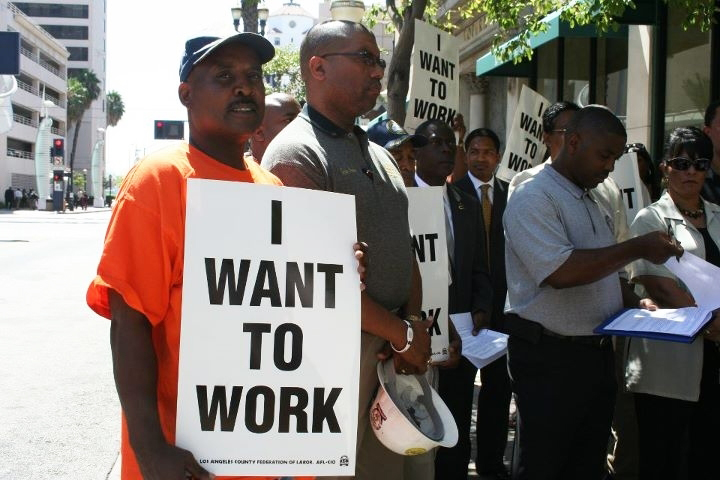 Representatives from the NAACP, Community Coalition and the Southern California Leadership Conference were also on hand at the rally. All of the speakers drove home the point that “20 percent African American unemployment in California should not be tolerated another day when a simple YES vote on SB 292 to expedite CEQA litigation for AEG’s Farmers Field project would result in thousands of jobs being created as early as 2012,” said Caroline O’Connor, a representative of the LA County Fed.

SB 292 had passed in California’s Assembly on the previous day, Sept. 7, and public pressure successfully moved the state Senate to pass it late Friday, Sept. 9. The pressure was so heavy, the San Diego Union-Tribune quipped that “football fans across Southern California seemed more focused on SB 292 than on SB [Super Bowl] XLVI.” Gov. Jerry Brown has until Oct. 9 to sign the bill into law.

Thandisizwe Chimurenga, conductor of the CyberGround Railroad, “Black Los Angeles’ News and Views Source,” is a community journalist and a founder and host of Some of Us Are Brave, a Black women’s public affairs show on KPFK-Pacifica Los Angeles. She has reported for the L.A. Watts Times newspaper, KPFK Evening News and Free Speech Radio News. She covered the trial of Johannes Mehserle, who murdered Oscar Grant, for the Bay View and several other Bay Area news organizations and is the author of a forthcoming book on the trial. She can be reached at tchimurenga@gmail.com.